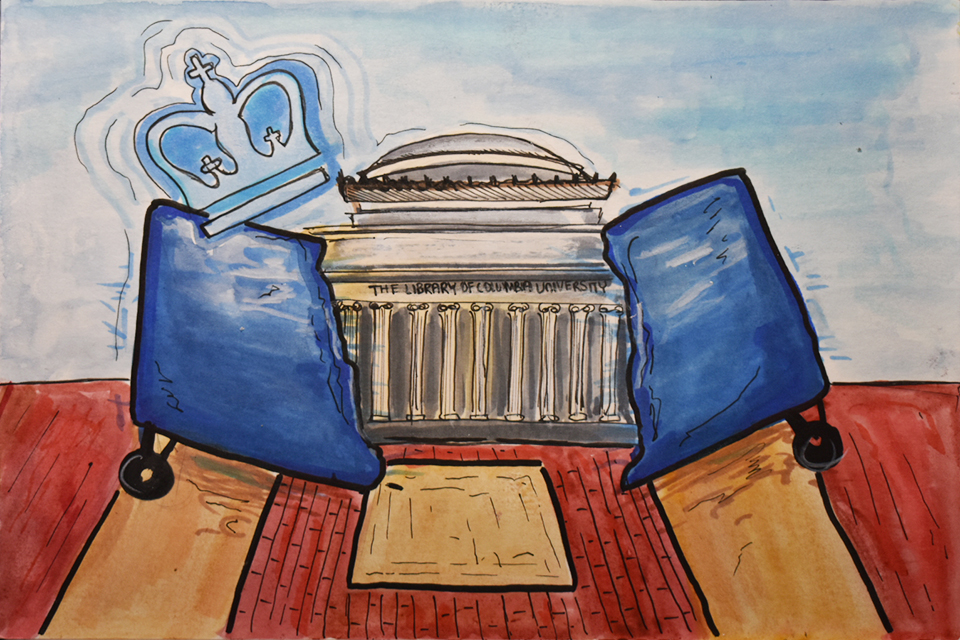 Campus is usually busy right before 10 a.m., as everyone walks to their 10:10 classes, or to the library, or, like me, back from breakfast. At 10 a.m. on this Thursday, I didn’t know that I would be embarking upon my last mid-morning march between Ferris Booth Commons and Wallach Hall. Online, professors were emotional, Zoom breakout rooms were awkward, and I honestly just couldn’t find—and still can’t find—where the hand raise function was.

I received an email from University President Lee Bollinger during my first online lecture of the day: “All classes for the remainder of the semester will be conducted online. … We encourage any students who are able to move out of undergraduate residence halls for the rest of the semester to do so.” For the rest of that class, I tried to pay attention, but I couldn't. I immediately texted my friends and my parents. I texted my editor. I had about a million questions, the most alarming one being: Should I move back in after spring break or say goodbye to Columbia until August?

Still living in indecision, I decided to hang out with one of my closest friends. We talked and took BuzzFeed quizzes, laughing in blissful ignorance of the fact that I would be in Virginia less than 24 hours later. Like my Ferris breakfast that morning, I didn’t know that would be the last time I could hang out with her for the rest of the semester.

I didn’t decide to move out until I went downtown to get an early dinner with my mom and sister. In the course of the one hour meal, my family’s plans to explore New York were thwarted by genuine concern, canceled Broadway shows, and a rumored New York City lockdown.

After I packed everything up, my dad arrived on campus at about 1 a.m. We loaded up the car. As I walked back and forth between my room and my car, campus was like I’d never seen it before. Dining hall meal to-go boxes were overflowing out of every trash can outside of John Jay Hall. But rather than staying in their rooms or libraries, students gathered outside of Hartley Hall and Wallach drinking cheap beer and laughing. People were crowded on Low Steps, not taking pictures or eating meals, but singing the fight song, lighting fireworks, and cheering. When Public Safety officers arrived, many rushed into Butler Library, still singing the fight song.

One girl saw me pushing a move-out bin across campus and said something resembling a thank you for moving out, but I couldn’t quite hear her over the people screaming and the sound of the bin’s wheels rolling over the brick. It was fascinating, and part of me wishes I had been a participant rather than just a viewer.

But these lasts were only for this semester. There will be more lunches on the steps; more fun afternoons with friends; and many, many more long nights at the library. Even in unique circumstances, there is room for new memories and moments. Maybe in the future, I can join in singing the fight song and setting off fireworks on Low Steps—but perhaps under different circumstances.