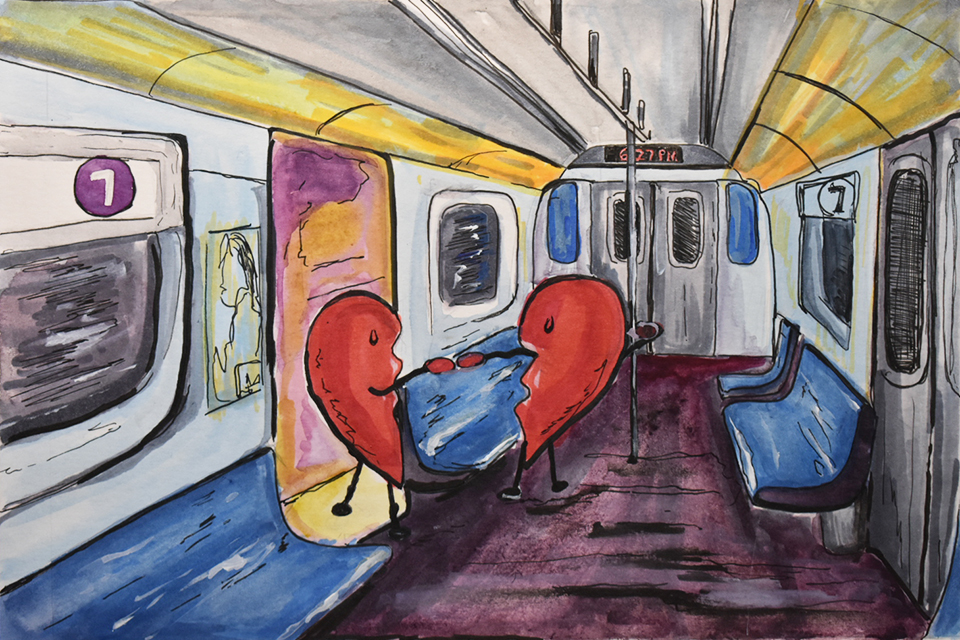 Shortly before the spring semester started in January, I met a guy on the 7 train. We hit it off right away. I liked how he listened to me, and how he genuinely cared about the answers I gave to the questions he asked. We both got off at the next stop, exchanged numbers, and hugged goodbye.

We went on a date about once every week since then. If we weren’t at his apartment watching cooking shows, he was showing me around the big city. I’m from a small town out west, and he’d lived and worked in New York for years. At first, I was afraid this difference meant that we would have nothing in common, but there was enough common ground in television and food favorites to make it work.

After a Sunday of binge-watching MasterChef together, I checked my phone and saw another in a chain of emails from University President Lee Bollinger. This one said the University was ordering all undergraduates to vacate the residence halls within two days. I would have to leave New York—and my boyfriend—for my hometown that is nearly 2,000 miles away.

Thus began another conversation between me and my boyfriend about the coronavirus pandemic. We had already talked at length about being cautious and concerned about its rampant spread in New York. I kept him updated on what Columbia told us about the virus, and he sent me witty New Yorker cartoons about washing your hands.

While we were o a date in Riverside Park, he mentioned that Harvard University sent all of its students back home; I reassured him that the University said undergraduates could stay in our dorms until the end of the semester if we wanted. That day was Wednesday, March 11, and New York already had over 200 confirmed cases of the coronavirus. We both knew that the situation would continue to get worse, but Columbia seemed like it would be flexible in its emails to students.

On that Sunday, March 15, my boyfriend learned that I had to go back home before my parents did. I had to pack up all my belongings and leave both the city and the man I’d fallen for by Tuesday. I didn’t know where to begin or what to do on such short notice.

I vented to him as I tried to force my entire dorm room into two suitcases. I was completely overwhelmed. I felt as though everything in the world was rushing past me, and I was just standing still and watching it go by. He listened to my frustrations and my fears and told me that we’d be alright. Long-distance relationships were made easier than ever by the Internet. Our time apart would be challenging, and we were not sure how much time we would spend apart, but maintaining our relationship wouldn’t be impossible.

The night before I had to get on the plane back home, I went to say goodbye to my boyfriend. On the 7 train to his apartment, I couldn’t help but notice how different everything felt from just two months earlier. Instead of leaning into a stranger, wanting to hear each and every word he was saying, I huddled into myself, trying to touch as little of the subway car as possible.

I brought him the rest of my disinfectant wipes and some food in a paper to-go container that the dining hall staff made me take. We assured each other that we would make it. There were apps that let couples watch shows together, and we always had FaceTime. We hugged for the last time and danced a little in the hallway of his apartment, telling each other that we’d be fine.