From the Passenger Seat

From the Passenger Seat 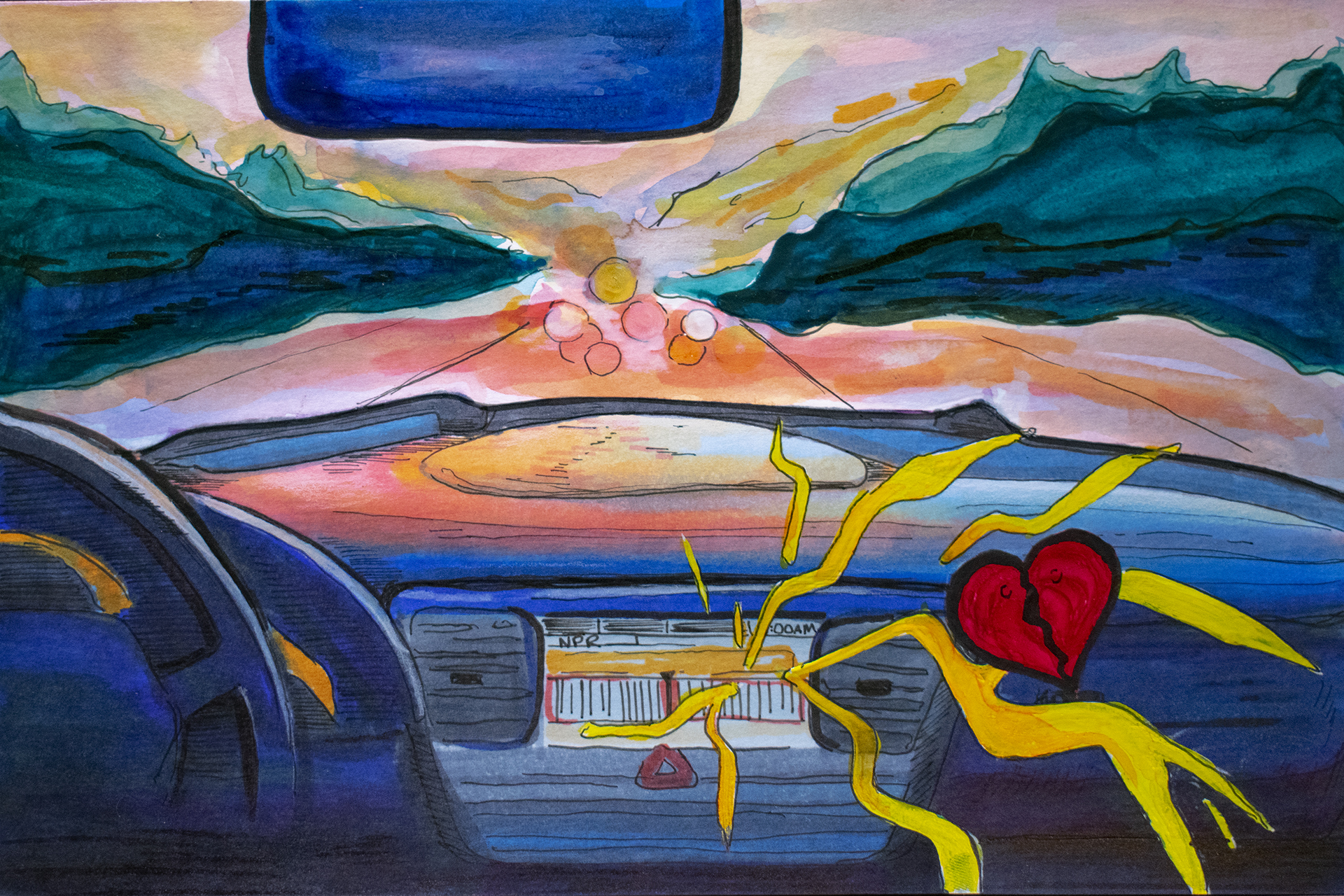 Somewhere between hour four and hour six of the journey, I lost all sense of time and space. We were either in Ohio or Pennsylvania. It wasn’t quite day anymore, but it definitely wasn’t night. The lingering smell of the movie-theater-flavored cold microwave popcorn we ate earlier was both comforting and sickening.

Earlier that day, March 15, I wake up to about 20 missed texts and emails. Confused and half-awake, I grab my phone, see PrezBo’s email, and stumble upstairs, my thoughts already racing. My dad has the news playing loud on a speaker. I plop down at the kitchen table.

“Is this an emergency?” he growls. This is a question I have been asked on approximately a million other mornings growing up—I was a teen that thought every morning announcement she had was more important than the morning news. Before today, my answer to that question has always been a solemn “No,” forcing me to admit defeat and listen to the news quietly alongside my father. But for the first time in history, I proudly say, “Yes!” My dad, rolling his eyes, turns down his speaker and listens to my announcement; I basically read PrezBo’s email word for word.

What followed was an hour or so of revelation, despair, the exploration of other options, and an acceptance of our fate: We’re driving to New York. Before that morning, I had every intention of returning to campus after spring break. But PrezBo’s announcement had changed things: I had left too many valuables in my dorm to let a moving company come and pack up, and driving was much cheaper than flying to New York and shipping everything back. We look it up on Google Maps, and the drive from my home in Michigan to New York is nine hours and 47 minutes. With limited stops and a determination to do it all in one day, we get it done in just nine short hours each way.

So there we are, saying goodbye to my mom and siblings, throwing the bare essentials in the trunk of the car, and beginning our journey. Our first challenge? Picking out the right background noise. Every good road trip has a soundtrack, something that sparks conversations and sing-alongs—it’s the necessary tool that keeps the driver concentrated and passengers entertained. With my dad as the driver, he gets to control the speakers, and his soundtrack of choice: Talk radio.

NPR, MSNBC, whatever random free Sirius News channel is out there—all anyone has to talk about is the coronavirus. Of course, it’s important to stay informed, and to be fair, all of the conversations I have had in recent days were about the virus. But was there really nothing else to talk about? I even hoped that listening to the Democratic debate that night would be a welcome break—but no. Even CNN had to ask how often the candidates were washing their hands.

“This is really happening.”

Listening to every expert—and uninformed politician—have their turn to talk about the crisis, with live commentary on the same topics from me and my dad, I quickly began to feel the surrealness of the whole journey. We had traveled those same 635 miles before, but never without traffic jams, never with empty rest stops and takeout-only restaurants, and never with the careful caution of hand sanitizing and Cloroxing.

On the road that night, I felt like a little kid whose game of pretend got unnervingly real. I was a daredevil, voluntarily driving in the center of an invisible storm, almost being carried there by the disembodied voices of the FM radio. At the same time, I was a secret agent on a stealth mission: Get into New York City, secure the goods, and get out quickly—all while doing everything in my control to remain unexposed and not bring something unwanted back to my sleepy Michigan neighborhood. And I was a smuggler bringing family members in the city items that couldn’t be found in New York—frozen vegetables and hand sanitizer. Was I going insane? This eerie tranquility was getting to the daredevil-secret-smuggling-agent in me.

We arrive on campus on Monday at around 1:30 a.m. I proceed to spend one final night in my dorm room. I wash my hands and play music on full volume—my suitemates are not there to tell me I’m too loud. There are boxes and discarded items scattered around the lounge. I keep thinking This is it.

The next morning, things almost feel normal. I get breakfast at John Jay like I used to every Monday, but this morning it is empty and takeout-only. I walk back to Hartley, watching seniors in grad gowns taking photos all over Low. Their smiles and laughs are the only sounds that break up the quiet on campus—that and the roar of blue bins. It feels like the exposition of a horror movie, where everything is OK, but just a little off. I’m OK, just feel a little off.

My dad and I pack up my room quickly, leave campus quicker, spend a short night with family in the city, and leave before dawn the next day. In the blink of an eye, we are back on the calm roads again. Places that were open just two days ago are closed on the drive home. I feel drained, speechless, and empty. The stunt succeeded; mission accomplished. The items are across state lines. The game of pretend is over.

“We really just did this.”

I laugh just as we enter Ohio on the drive home, still not quite able to believe it.