On trying, and Failing, to Stand Still

On trying, and Failing, to Stand Still 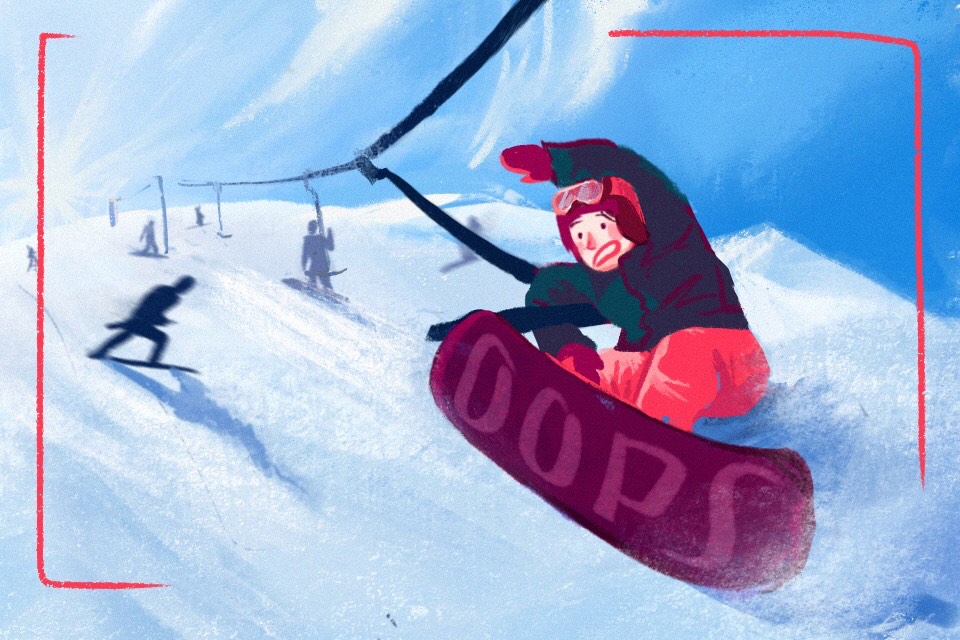 Three days before boarding a flight from Edinburgh to Los Angeles, I joined 30 strangers on a bus carrying snow equipment. We sat on pleather orange seats inside of what can only be described as a blue metal tin that carried us toward the snowy mountains. My friends and I readied ourselves for a day of skiing and snowboarding in the Scottish Highlands.

I hadn’t gone snowboarding in at least five years—I honestly couldn’t even remember the correct way to strap my board on. During the 30 minutes inside the rental place, we were primetime entertainment for the mountain’s employees as we struggled to figure out the shoe size conversion between the U.K. and the U.S. As I looked out onto the mountain with my board in tow, I tried to figure out how the chairlift worked. It wasn’t your traditional “sit down, relax, let-the-seat-lift-you-above-the-mountains” chairlift. Instead, it was, if you can picture it, actually a very large IUD attached to a pulley.

I know that my perplexity at the chairlift in front of me probably would have earned me the gold medal for inconsequential study-abroad problems. The fact that I could even go snowboarding with less than three hours notice would likely qualify for a medal of its own.

With my day pass in my pocket, overpriced goggles on my head, and an inappropriate amount of confidence, I volunteered to up the lift first.

Before I knew it, I was on the ground. Not just my feet, no, my whole body was being dragged up the mountain. Onlookers stared with concern, and the nice Scottish man working the lift shouted at me to let go. For some reason (I’m not entirely sure I heard him correctly), I didn’t. Instead, I let the T-bar drag me upwards for another 15 feet. Finally, realizing this was not, in fact, a sustainable way to continue up the mountain, I heeded the Scottish man’s advice. I let go, took off my board, lowered my head, and moped down the hill. My friends laughed hysterically—and could I blame them?

I was too proud to show just how embarrassed I really was. I spent most of the next hour on the smallest bunny hill, however, which probably spoke for itself. It was the kind of place where ski instructors taught their toddlers how to do “pizza” and “french fry,” “falling leaf” and “J-turns.” The instructors explained to their classes—while I eavesdropped for free—that the whole trick to this weird (apparently not uncommon) skilift was letting it take you.

The bunny hill had a smaller, simpler version of the T-bar—a rope you grabbed that pulled you up the 100-foot hill. It wasn’t rocket science. It could honestly hardly even be considered any form of science, but it felt uncomfortable for me to just stand there and not do anything at all. Throughout my three minute journey, I wanted so badly to just pull myself up the hill. Instead, I endured vicious rope burn. I hated it—until I learned not to.

I realized that success on lifts like these wasn’t actually about doing nothing. Rather, you had to learn to stand still and keep balanced for the length of the mountain.

It took about four or five runs up and down the bunny hill for me to finally feel comfortable enough to take on the notorious IUD. One of my friends had decided skiing wasn’t for her; she treated herself to aprés and made friends with some older people in the lodge. Another had already taken to the big-girl slopes. I tackled the chairlift alone. When I did, the nice Scottish liftie noted I’d been brave enough to come back. Positioning me in the most foolproof way possible, he told me to relinquish control.

Exactly two weeks earlier, I had been sitting in Paris, helping my friends Sophie and Aminah unpack a stockpile of groceries they’d just bought from Monoprix in preparation for a potential country-wide shutdown in France. Later, we went to pharmacies looking for hand sanitizer where they were either dangerously low on stock or sold out entirely. We laughed at how crazy the situation felt while we sipped on cheap French wine. Despite our preparation, the thing still felt removed from us—as if it was happening there, but not necessarily here.

After I returned from Paris, I received a text from an unfamiliar group chat called “Corona.” I clicked on it to find a message from my friend Zofia, with whom I was set to travel to London that weekend:

She was studying in Madrid, which had quickly become a European hotspot. I responded:

By this point, friends in Italy had been sent home, and we’d started to come to terms with the fact that study abroad might not end how we thought. But unwilling to succumb to something that still didn’t feel imminently threatening, we went to London.

Two days after we got back, I got a text from Sophie in Paris:

— Aminah and I booked for Friday

That was March 10. Two days later, Trump announced during a televised statement that he would ban all travel from mainland Europe beginning Friday, March 13 at midnight. Friends in mainland Europe scrambled to book flights that left before the 13th. (Of course, this was before news outlets clarified that the ban did not, in fact, include US citizens—something Trump had failed to mention in his televised announcement.)

On March 12th, as friends in Paris, Madrid, and Copenhagen packed their bags to head back to the states, I assembled an overnight bag for a last-minute snowboarding trip into the Highlands.

The next day, I stood in front of an employee at Cairngorm Mountain Ski Resort who gave me very simple instructions: just stand still. As I made my way up the mountain, I had no choice but to release control. I had to give myself over to this IUD-shaped chairlift and accept that, if I let it, I would get up the mountain in one piece.

My last two weeks abroad felt not unlike to how I did on that chairlift: out of control. No matter how hard I tried, my inclination to plan or organize my life felt futile. The number of cases continued to rise and travel restrictions changed on a daily basis. Even when Barnard asked us to return home, St Andrews suggested that operations would continue as normal—meaning in-person classes would carry on without me. At the time that I left, I didn’t know how I would finish my classes, whether I would get credits, or if this meant I might not graduate on time.

I’ve never been great at feeling out of control. I’m more comfortable making plans weeks in advance than the day of. I tend to like cooking more than being cooked for (except when the cook is my mother). In an environment full of chaos, habits like these give me a sense that I have a handle on things.

Now, 25 days into quarantine, I’m reminded frequently of falling off the chairlift (and not just because my friends keep bringing it up). I return to the sensation of falling and feeling, just for a nanosecond, like I might not actually get up. I come back to the discomfort of losing control of my own body and not knowing what the hell to do except laugh at my own stupidity.

I feel out of control almost every day. As time blurs slowly towards a currently unknowable end, I feel like I’m back on the T-bar doing everything possible to make it to the top. But then I remind myself that, in the end, I did eventually make it (and more than once too!). And when I did, I finally took a deep breath, released the tension I’d built in my hands and shoulders, and let the T-bar fly out from under me—all the while, I just stood still.