Columbia’s Architecture is Not an Urban Act

Columbia’s Architecture is Not an Urban Act 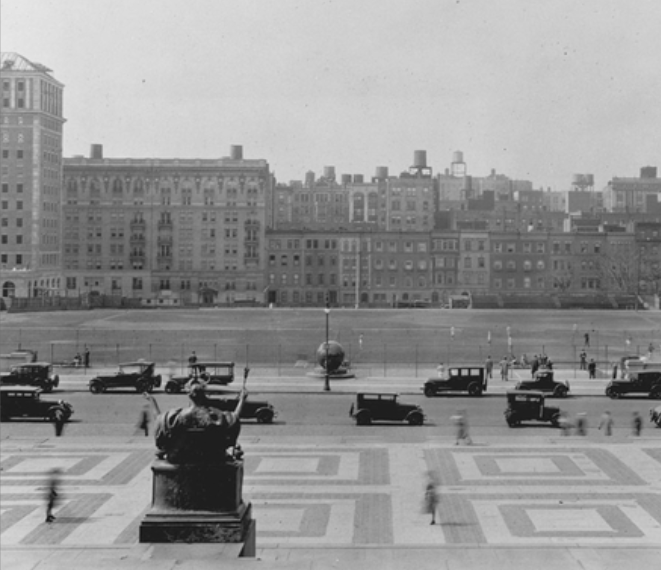 While walking through the streets of Manhattan, Harlem resident and Columbia College first-year Zenayah Roaché comments, “It’s like a whole different world. When you go up the blocks, you enter this world much where everything is separated, so now you continue to live in this ‘story.’”

Since its move uptown to Morningside Heights, Columbia has capitalized on its brand as the “best that is human heritage” as it expands into West Harlem and the low-income housing complexes that surround campus. In 1896, University President Seth Low hoped Columbia College would “integrate” itself into New York City life. It was that with that vision in mind that the school changed its name to Columbia University in the City of New York.

As it was being developed, the campus design was inspired by Columbia’s mission to serve as a center for groundbreaking modern research and communicate its new municipal values to the public. Low sought to reassure any doubts about an “inhospitable educational urban setting” by attempting to dismantle the negative preconception of a city campus, noting that “the great city itself gives a view of life which is no slight part of the student’s education.”

In the decades to follow, the University continued to accumulate wealth, which it used to acquire more property throughout West Harlem. However, while Columbia continued to expand under the guise of “public good,” it called on its overwhelmingly white, wealthy, and elite community to protect the safe academic haven of its campus from the Black criminals in the streets of Harlem. West Harlem—described by contemporary reports as a “slum” and a “breeding ground of poverty, disease, and crime”—became a target for policing, creating hostile conditions that were exacerbated by students who often called for police reinforcements in fear of the perceived threat of their “criminal neighbors.”

As the campus population became more exclusive, especially following the college’s transition to residential housing, its architecture also reflected the same sentiment—low-income, Black residents in Harlem did not belong there.

In the 19th century, after much debate among the trustees, they ultimately settled on Columbia’s most visually-defining feature: an adoption of classicism for its buildings and the firm rejection of Gothic style, which had been the style of great American universities at the time. This deliberate choice was intended to present the University as metropolitan and bound to New York City, while also acting as an avant-garde symbol of learning. As classicism was the language of the Greek polis, the style was used to design the Low Memorial Library, the epicenter of the new research institution. South Court, with its ascending steps and plaza, further established the metropolitan culture of the school while presenting itself as a collegiate environment. The open space allowed for student interaction and community activities, considering that there were no gates and 116th Street was open to traffic until the 1950s. 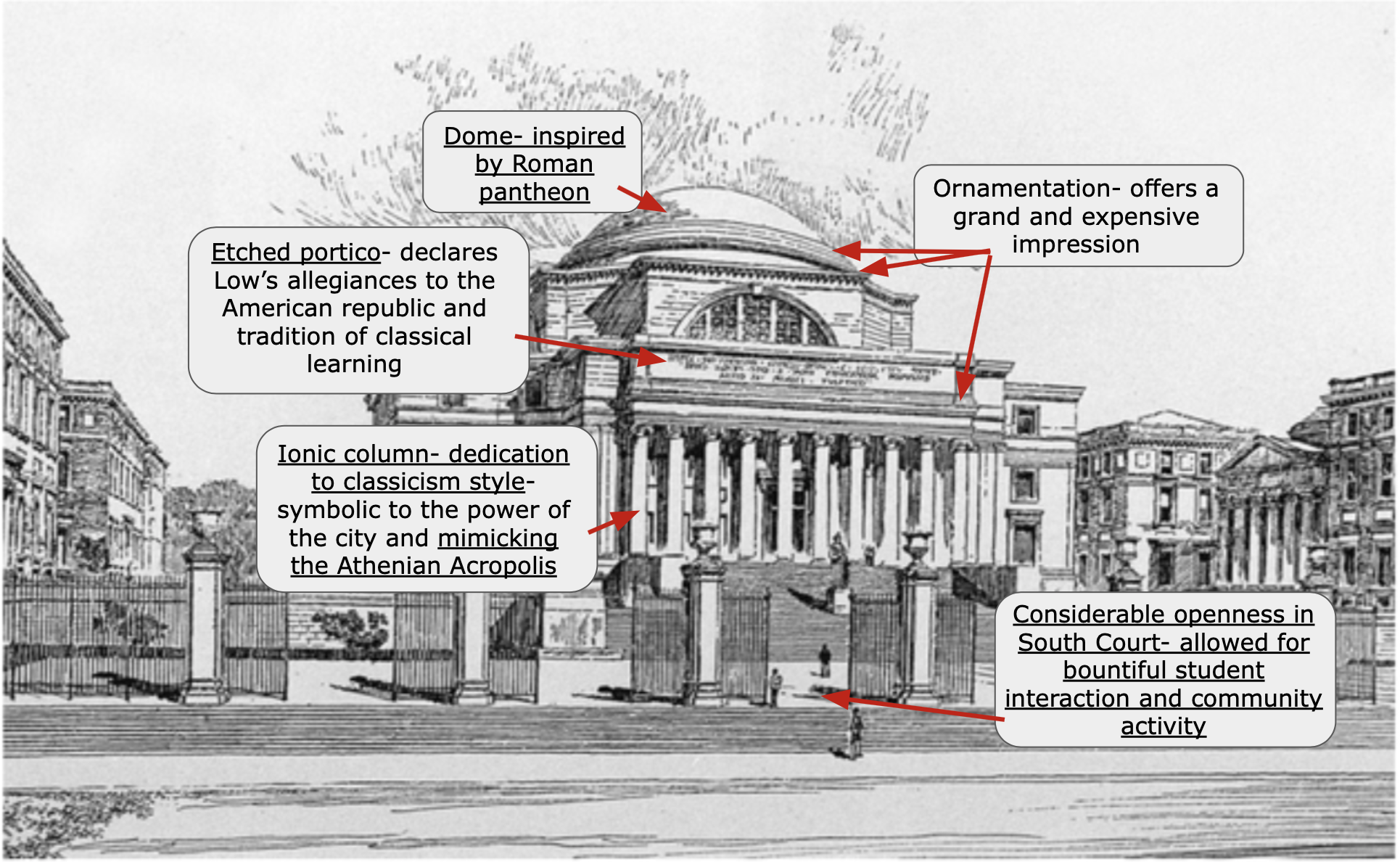 Charles Follen McKim, an esteemed classicist architect from the McKim, Mead & White firm, designed the original campus to be open to the city, making easy public access and close integration with the urban fabric possible. Along with Low, McKim designed South Court to be “wholly municipal in character,” often referencing the St. Peter’s Basilica and the steps of the American capitol in Washington, D.C, as inspiration. However, although the granite platform created visual unity among classroom buildings, it also elevated the buildings above street level, creating what is often described as a “fortress wall” along the street.

The original design plans did not include residential housing. Low focused on building a research university and believed the real estate market would fill the housing needs of students.

In 1903, after a change in leadership, University President Nicholas Murray Butler considered the metropolitan condition a “nuisance” and began pouring in millions of dollars to attract students outside of New York City to the institution. By opening admissions to male students across the country, he drastically reduced the number of local students who would attend, and by investing in dormitories, he sought to draw in wealthier, white students. Butler’s decision coincided with a wave of migration of Black residents into Harlem following a real estate market crash in the early 1900s.

Dormitories enabled Butler to promote his elitist and homogenized vision of the student body by attracting more out-of-state, wealthier, and often Episcopalian students whom he much preferred to the commuting immigrants and Jewish families in New York.

According to Morningside Heights: A History of its Architecture and Development by Columbia historic preservation professor Andrew Dolkart, it was during “Butler’s leadership that Columbia finally entered the first ranks of modern American academic institutions, but it no longer sought to become a powerful force for progressive social change in New York City.” Butler had a different view of the University than his predecessor, desiring a self-contained campus and significant disconnect from the city. He helped define a particularly anti-urban social agenda and new concept of selectivity.

While the initial plans for Columbia were already considered a “very enclosed design,” as stated by Dolkart in an interview, expansion into the South Court would eventually block the view from the library terrace of the city. This inward expansion and separation of Columbia’s campus from the greater Harlem community continued to demonstrate its growing exclusionary practices.

In his interview, Dolkart argues that Butler did not have an “anti-urban” vision, as he disagreed with a board member’s suggestion to move the University to a rural location. However, he certainly desired Columbia “to be a kind of isolated pod within the city,” ensuring the legacy of Columbia’s “protective” bubble.

Incoming Columbia College first-year Kevin Medina, an East Harlem resident, notes that when he first visited Columbia, he thought “Columbia was segregated. ... [As] you go up and enter Columbia’s space, everything is well-kept and in good condition, but if you go down Morningside Park and walk two blocks away, it’s a completely different set of architecture.” While understanding the nature of the stark difference, he states that “living here in New York and familiarizing myself with what to expect of Harlem—lots of brownstone, lots of fun, caring people—and then going up Morningside Heights ... [Columbia] almost feels artificial.”

Ultimately, Butler Library, named after Nicholas Butler himself, would close off any view from Low Library’s portico to the south. Butler had officially created the educational “acropolis” that historian Thomas Bender would note as “in the city, but not of it.” 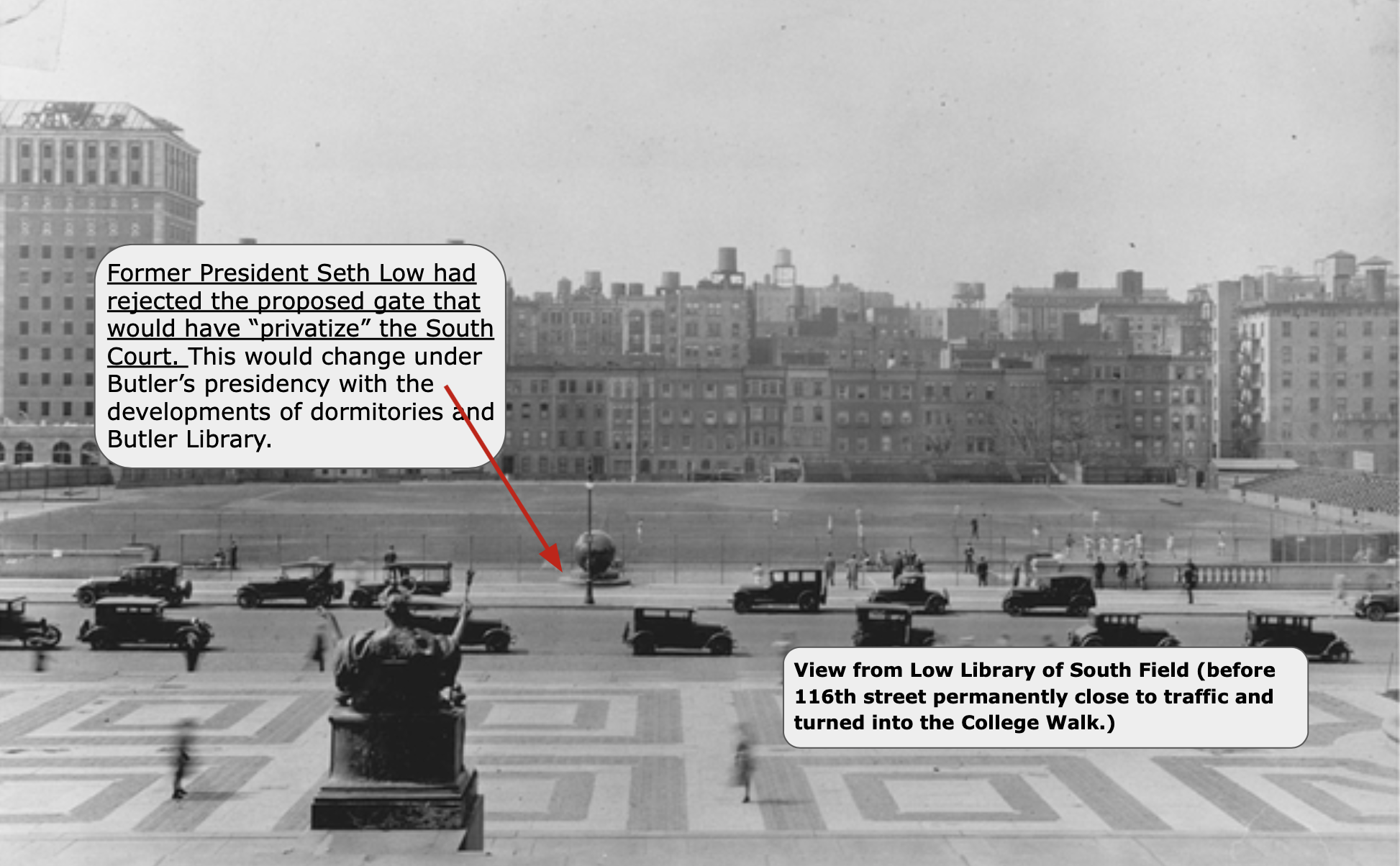 After South Hall’s completion in the 1930s and Butler’s resignation in the 1940s, Low’s and McKim’s architectural vision of a unified, monumental campus was forgotten.

Over time, as New York City’s subway system opened and many apartment buildings in Harlem and Manhattanville were built, a community surrounding Columbia began to develop. During the post-World War I economic downturn, Columbia purchased many single-room occupancy apartments in Morningside Heights. However, these apartments housed many poor people of color, including hundreds of Black people, who made up 70.18 percent of the Central Harlem population in 1930.

The latent tensions between the institution and the local communities eventually erupted in the infamous 1968 protests as students and residents opposed the University’s outrageous plan of constructing a racially-segregated gymnasium in Morningside Park. While the project seemed like an innocuous expansion, the protests voiced the surrounding communities’ anger over Columbia’s further racial exclusion and intrusion into the area, earning the gym the nickname “Gym Crow.” One aspect of the gym in particular—the community entrance at the bottom of the building and the entrance for Columbia students at the top—drew particular ire. The general community would only be able to access the lower two floors while Columbia students would have access to all of the upper floors. 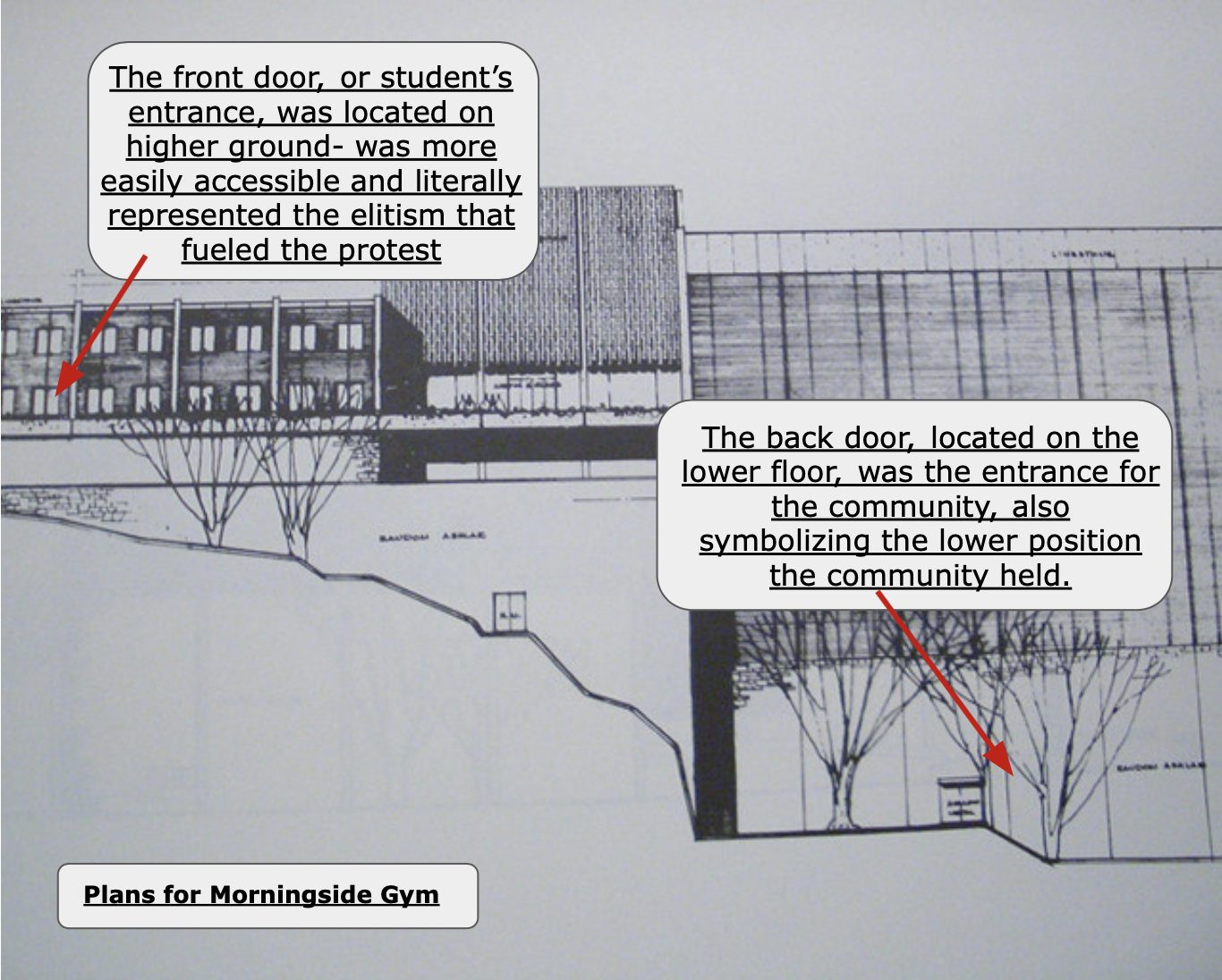 Columbia has made a habit of building structures that, despite their stated intentions of preserving the communal spirit, further alienate students from the city residents.

Columbia’s expansion continues to be a point of contention today as it pursues the development of a new campus in Manhattanville. Much like how Butler had “greatly feared invasion from Harlem which has been threatened more than once,” similar sentiments still ring true in the architecture Columbia chooses to build today. The basic architecture of Columbia’s Manhattanville expansion sticks out like a cool glassy thumb against the industrialization of neighboring Harlem.

Manhattanville administration claimed that the architecture, specifically The Forum, would act as a “gateway to an urban campus, designed for both academic and civic engagement” with an intention to connect Columbia’s Manhattanville campus, West Harlem residents, and the general academic community. However, while critiquing The Forum, Manhattan Community Board 9 member Dan Cohen remarked how there is an “illusion of community output [as] we really don’t have access to it,” criticizing the Manhattanville structures’ lack of accessibility and the overall visual unapproachability for those in the area who have a lower socioeconomic status.

Kaja Kühl, an adjunct associate professor at the  Graduate School of Architecture, Planning and Preservation and former New York City city planner who worked on the Manhattanville project, notes that at a Community Board 9 meeting, University President Lee Bollinger made remarks that he believed the community was “much better off” with Columbia’s presence in it. Additionally, after New York City agencies refused to assist in the rezoning of the area, Columbia reached out to New York state and made it clear that it had little interest in maintaining a large community presence in its expansion process. However, Harlem resident Roaché describes changes in the Manhattanville area, mentioning that “it’s becoming more of a tourist attraction instead of a home where culture was brought.”

When we try to understand the original intents of the University’s design, the idea of what it means to be an urban university has evolved. Unfortunately, many members of surrounding communities share the sentiment that their concerns are ignored by the University. Medina states that “for the right pockets,” Columbia has stayed true to its integrative mission, “but for the people who actually live in this area, no, not in the slightest.”

Steven Holl, Time magazine’s 2005 best architect recipient, explains it best: “There was a time when the distinguishing element of America was its open space. But today, with that space disappearing, every act of building is an urban act.”

Enjoy leafing through the Summer Issue!