When a Hometown Becomes a Home

When a Hometown Becomes a Home 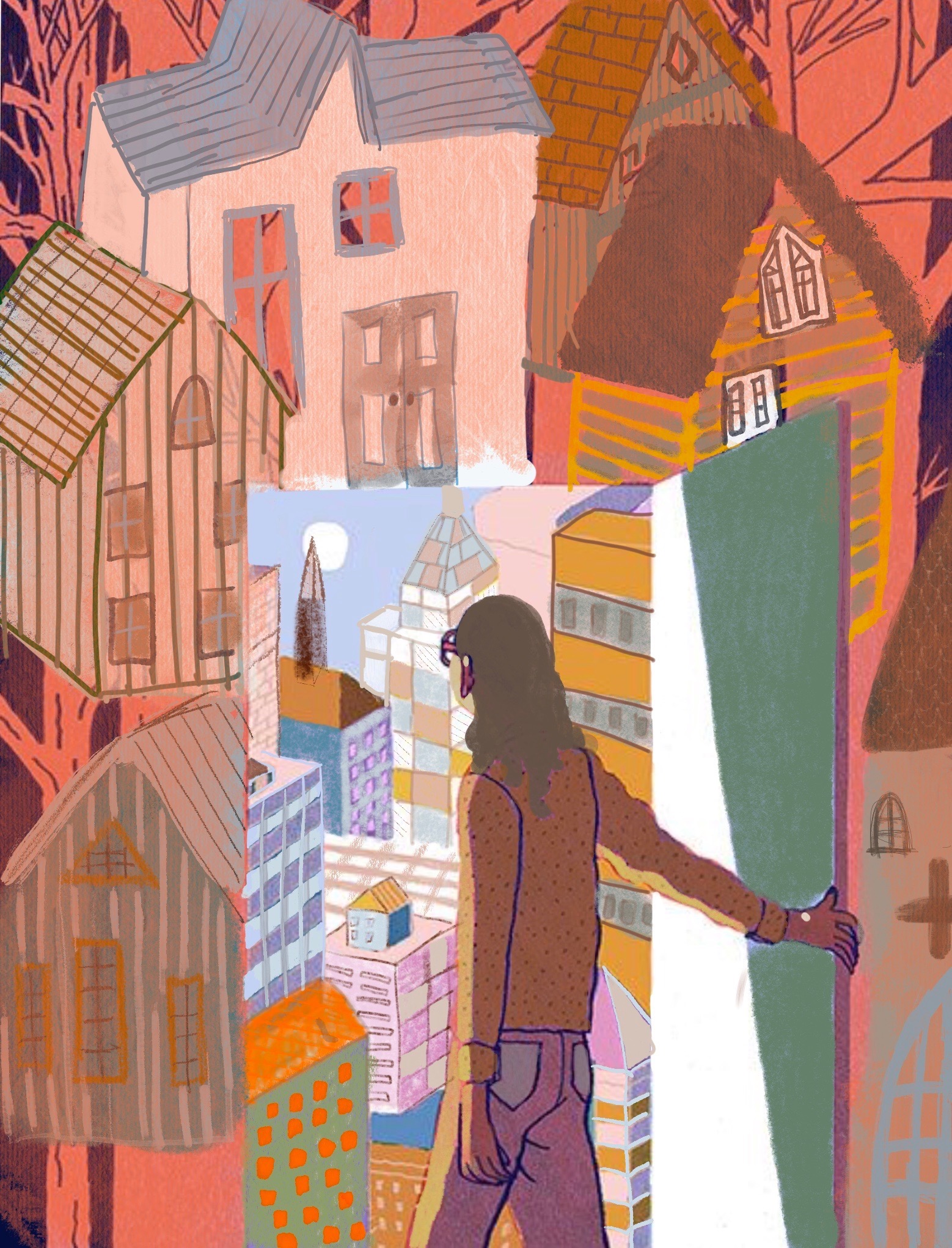 I love my hometown—I think. In the summers, townies and tourists mill around Brunswick, Maine like fish in a stream. The locals are shiny, broad-backed trout; they’re tanned and wear Red Sox caps and tee shirts from local breweries; they drive trucks with immaculate exteriors and crushed Budweiser cans under the seats.

The tourists, coming from an unfathomable place called “away,” are more like minnows, if minnows were capable of chuckling every time they see the “Maine Street” sign. They buy $40 souvenir shirts and clog the road with receipts and auto traffic. Around lunchtime, everyone stands in line at Danny’s hot dog stand and the sunburn-pink ice cream shack. I love my hometown, I think. But what I have never loved is living there.

There’s a Lenny Bruce quote that pretty well describes how I feel: “I hate small towns because once you’ve seen the cannon in the park there’s nothing else to do.” In Brunswick, it’s the Joshua Chamberlain statue, but the sentiment remains intact. Here, the only thing open after 9 p.m. is Applebee’s. Teenagers rebel by drinking beer that tastes like dirty socks in basements that smell the same. Here, the sun sets at 4 p.m. from October through March, and though they are beautiful sunsets, dripping down between the pine trees in impossible shades of orange, the darkness that comes after is stifling.

Since I’ve started at Columbia, I’ve never looked forward to going home. Part of my reluctance comes from a desire to protect the fond memories I have of Brunswick. During breaks, my relationship with my parents reverts to what it was in high school: a mess. My mom is pushed to her limit by our proximity, my dad becomes a grade-A nag, and I kind of turn into a bad person; the house is full of more tensions than a Literature Humanities text. In the same way, every time I return home and spend time with my high school clique, I leave the coffee shop or the ice cream joint with a heavy feeling. With a few blessed exceptions, there is a disconnect between me and the people I used to consider my closest friends.

It’s not that the love has disappeared. I still care deeply for the girl group that welcomed me to its lunch table on the first day of sixth grade. However, the strings that tied us together in the first place were our physical proximity, our common interests within the context of our 800-student high school, and our work ethic. The work ethic remains; we all ended up at selective (i.e., expensive) colleges, but none of my friends chose metropolitan schools. In fact, most of them stayed in Maine; a few even chose Bowdoin College, the campus of which begins 800 feet from my back door. Their decision to stay, and mine to leave, has created a gap of understanding between us that is mostly my fault. They’re still the shiny, broad-backed trout, comfortable in the small stream of Brunswick. I, sadly, have become a minnow.

But now, like the vast majority of Columbia students, I’m home. One reason I chose Columbia was for New York City, so although I recognize the privilege of having a safe and loving home to return to, it feels like a loss. I’ve redecorated my room just like my Carman 8 double in an effort to pretend that the view outside my window is still the top of the Beta brownstone framing a New York City sunset and not a cluster of pine trees. Despite all my efforts to “escape,” I have ended up in small-town Maine. Still, not all is lost. Since I’ve been back, my parents and I have settled into a routine that is, if not exciting, comfortable. My food journalist mother, once a stickler for sit-down family dinners, whips up something delicious out of whatever is left in stock at the grocery store that week. We park on the sofa and watch an episode of Gilmore Girls.

Watching Gilmore Girls with my parents reminds me of two things. The first is a similar scene 10 years ago with a boxed DVD set, a smaller couch, and a much smaller me, in a dusty basement in central Pennsylvania. Although I didn’t understand Lorelai’s witty repartee back then, I enjoyed the time with my parents and the naughtiness of eating pizza over carpet. The second is that Brunswick is a lot like Stars Hollow. Although we lack an established town troubadour, we have the same gazebo in the town green and the same sense that everybody knows everybody. This has its disadvantages—"Hey, Eliza, was that your car I saw out at the bay at 2 a.m.?"—but is mostly just really, really nice. Back when school was still a thing, my mom sent out a cry for help via Facebook when I discovered that I had somehow lost my copy of To the Lighthouse. Within hours, I found a copy sitting on the tree stump in my backyard, nicknamed the “dump stump” in honor of its current position as a contact-free drop-off spot.

If Brunswick is Stars Hollow, then I should be Rory, although I’ve never dated anyone as good-looking as Jared Padalecki. There’s something that doesn’t sit right about this characterization, though, like one of those itchy-looking sweaters Emily Gilmore was always wearing. Rory, even with all her big Harvard dreams, feels comfortable in Stars Hollow. She is an integral part of the town and accepts her place as such. I’m used to Brunswick, but I can’t claim the same amount of ease.

I’m lucky to be able to whine about where I come from, and here I find myself whining. Like a lot of people who end up in New York City, I was a restless kid, and this manifested as a need to participate in every extracurricular, to constantly achieve, and above all, to get out. By my senior year of high school, I convinced myself that I had outgrown this town, even that I had outgrown Maine in all its vastness and intimacy. This idea of getting out, of escaping the small-town life, is not a new idea. Nevertheless, I often find my feelings about going home incongruous with the excitement of my friends at Columbia. My roommate took the bus back to Washington, D.C., every weekend she could, returning late on Sunday nights with a duffel bag full of fresh fruit and a mouth full of DMV slang. I, on the other hand, always preferred to have friends from home visit me. I used visitors as excuses to play tourist, although the discrepancies between our lifestyles became evident on nights out when they did not have the necessary, ahem, materials to get into certain spots. Why would I go back to Maine, I reasoned, if where I am now is so much better?

There is no small amount of guilt that comes with the realization that I don’t like going home. I feel ungrateful, especially when faced with the fact that being able to go home at all, let alone a safe and loving environment, is a privilege. I feel as though I’m betraying my family, my childhood friends, the high school English teachers that convinced me that my ideas were worth something (if I would just stop using the goddamn passive voice), the elderly friend of my mom’s who is my self-proclaimed biggest fan. These are people whose faith in me rivals their love for the outdoor farmers market. And trust me, in Brunswick the farmers market is a very big deal.

Something unexpected has happened during this quarantine. I’m excited for all of this to be over, but not only so that I can return to New York. I’m excited to truly return home. This town is not really Brunswick. Many of the shops downtown are shuttered and the streets are far emptier than usual. Bowdoin has closed off its grand brick buildings. There is far less of the business and exuberance and close-quarters affability that typically characterize Brunswick. We’re trying our best to maintain a community, but there’s only so much we can do over video or across picket fences six feet apart.

Even so, that little bit we can do is helping to lessen the sting of isolation. For the first time in about 10 years, I went to a drive-in movie, an industry recently invigorated by the closures of indoor theaters and the rise of boredom. We drove two hours north to see a screening of The Greatest Showman, and I bonded with my musical theater friends over Hugh Jackman’s surprisingly solid voice and our admiration for Zendaya. We met doing shows together in school—Bye Bye Birdie, Les Miserables, Titanic, Mamma Mia—where there was always tension within our friendships as we competed for roles and dance features.

Now there is no jealousy or contention; musical theater is once again something that can unite us, even if we can’t participate in it. The only cast over us is from the giant screen as we stuff our mouths with over-salted popcorn. The lives of my other high school friends have also pulled closer to mine again, although we seldom see each other even now that outdoor distanced hangouts have been allowed by the town council. The pandemic has neatened our looming futures into two paths: either going back to school or staying home. In the face of a global pandemic, a massive human rights movement, and countless humanitarian crises, we’ve all realized how small we really are. In the grand scheme of things, we’re all small minnows trying to swim upstream.

Yes, there are always going to be the people who plant Donald Trump signs even while living in counties with names like Aroostook and Sagadahoc. There will be people who never leave Brunswick and can’t understand why I want to, people who ask me if living near Harlem is safe, people who tell me that my major isn’t a real discipline. But none of those behaviors are exclusive to Brunswick, or even to Maine. New York City, as much as I love its noise and bustle and culture, isn’t any less ignorant than where I come from. Now I can recognize that “townie” is not a synonym for ignorant and that a small but mighty community is just as laudable as a big city that derives its strength from its size.

As soon as it is safe to do so, I’m going to live in this town without trying to escape from it. I’ll try much harder to understand why so many people are so happy staying right where they are. Maybe I’ll even check out that farmers market. When you’re stuck inside with only three people, a town of 20,000 suddenly doesn’t seem so limited in possibility.