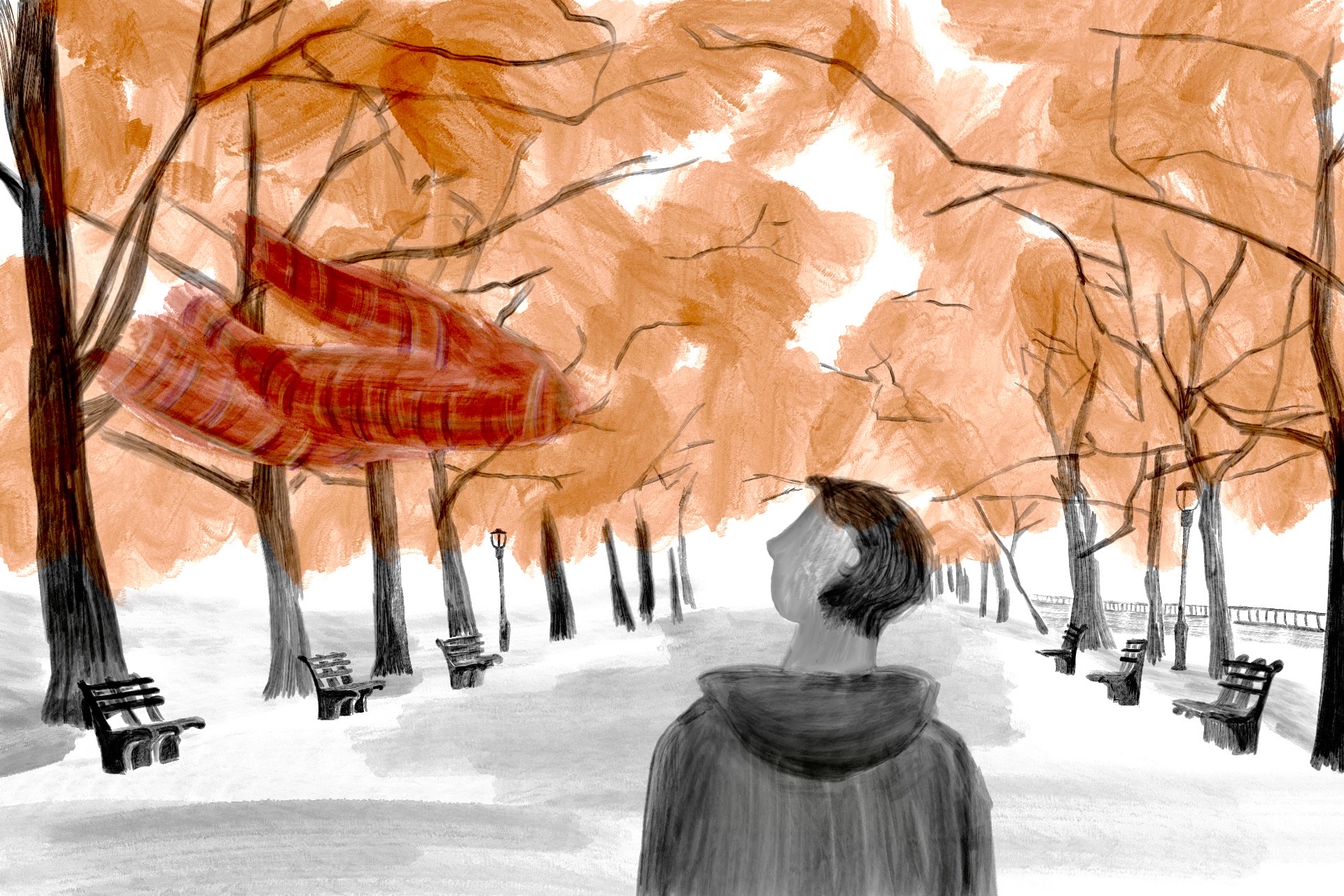 He was wearing Birkenstocks when we met. A loose T-shirt, a languorous gait. Not as polished as the pictures he’d sent to me over Grindr, but that was good—in the April of my first year at Columbia, I had finally and uncharacteristically gone onto the app looking for more than an idea.

He spent the first five minutes looking at the books on my shelf. After we had watched reality TV through his Hulu account on my computer, he told me that he was a humanitarian fighting sexual abuse in war zones. On the way out of my room, he paused to read the Mary Oliver poem I had printed out and taped to my wall.

“She your favorite poet?” he asked. I said yes. He spent a few more moments reading, nodding his head. In the elevator back down to the ground floor, I asked if we could see each other again. He told me yes, and we would for three months. In that time, he delivered a TED Talk, had sex with me on his bed in his large apartment, took me on walks with his dog Griffin, told me he had liver cancer, said that he had been abused in a child-pornography production ring in Florida, and told me that I was beautiful, constantly, waiting for me to tell him that he was beautiful, too (which I did, constantly).

“I’m going to remember you forever,” I told him on the corner of 110th and Broadway.

He laughed and looked away. “You don’t know anything, not really.”

It ended on a Saturday, the day after I turned 19. We were sitting on a marble bench next to the stairwell that descends to Morningside Park. It was my choice to cut ties, but that wasn’t because my family had voiced their suspicions with their countless baffled remarks (“Not that many bad things can happen to one person”) whenever I told them of Joel’s numerous traumas.

I was trying, rather, to be a new person: Someone who wouldn’t stay with a person who maintained a staunch distance, who routinely played mind games, who would never tell me how they felt. I still cried during our break-up, though. Cried as I returned the flannel he gave me on the night we walked through Riverside Park, cried as he gave me one last hug, cried as he kissed my neck and said goodbye.

Two weeks later a friend sent me a news article on Facebook. I opened it and saw Joel’s face beneath the words arrested and child pornography.

It’s difficult to admit that you’ve been scarred by something, especially when the source of the wound is someone you loved. Unfortunately, the fondness I’d grown for him hadn’t disappeared at the news of his arrest. It didn’t disappear for months. I would still remember his smell and how safe it made me feel. Still remember that night when he pulled the covers off my naked body and said, “Let me look at you,” before caressing me from the back of my neck all the way down to the bottoms of my thighs.

These memories held me like a belt cinched too tight around my waist. There was no one I could talk to. Joel knew how to isolate his friends from his lovers. It had been years since I’d been in therapy, not since high school where I had fallen into another disastrous one-sided love affair with my advisor, a fifty-five-year-old theatre teacher who violated so many of my and others' boundaries that he ended up fired. As with Joel, it took me years to fall out of love with that man. But the reality of who Joel was made me wonder: Do I attract evil people, or do I just have bad luck?

Then the question became whether or not Joel really was evil. No, of course he was—but what did that make me? What did that make all of the people who had it worse than I did, friends he’d known for years, family members who sounded nothing but kind whenever I heard them through his speakerphone. What were we to call the Joel we knew? An amalgamation of bullshit—that would be one option. But where would that leave us, a bunch of shit-caked morons who don’t know whether it’s appropriate to crumble at the thought of him in prison, who find it equally impossible to breathe as it is to grieve?

The rest of that year, Joel remained a dark, caliginous presence everywhere I went on campus. Low Plaza, where he told me the origins of the brick layout. JJ’s, where he and I would eat omelets after one of our frequent all-nighters during finals season when we didn’t study, just talked.

I maintained some semblance of normalcy during the beginning of my sophomore year. I kept on acting and laughing and getting drunk on the weekends. I had more sex with strangers and took drugs whenever they were offered. I relegated Joel to the work I submitted for my nonfiction workshop, where I was told by the professor that the piece I’d written was too upsetting for the class to read. I still wrote about him but rendered the scenes through a veil of tempered narrative structures and incessant use of the third person, displacing emotion with craft, ever-vigilant about content warnings.

It’s embarrassing how long I stayed a mess. Sophomore year was the time for me to get over it, but instead, I went through a series of breakdowns, each increasingly more public and injurious. Junior year came. I lived in the dorm farthest from campus, taking a step back from school activities and enmeshing myself in the fabric of my wonderfully kind housing group. That wasn’t enough. I swallowed eight doses of Tylenol in October and was brought to a hospital. Inside, I barely spoke of Joel. I thought he’d been sufficiently suppressed, my suicidal gesture a result of more asinine college dramas—but no. The experience of loving an unexpected child-molester stays in the veins like mercury. There’s no getting rid of it, only acknowledgment of it having happened and a constant aspiration towards the elusive prayer of peace.

Over the past months as the notion of normalcy has changed, I’ve challenged myself to face who I was as an eighteen-year-old falling head-over-heels for a monster who wore the mask of a hero. I look at the memory of that fresh adult in the eyes and say, I get why you’ve stuck around, but it’s okay. You can go.

I go outside for a daily walk. I breathe. I am starting to forgive myself. The love I had for him has waned enough for me to understand that it wasn’t my fault. The cluelessness, the self-loathing, even the love itself. I will never forget his face, but I am on the path to forgetting his smell.