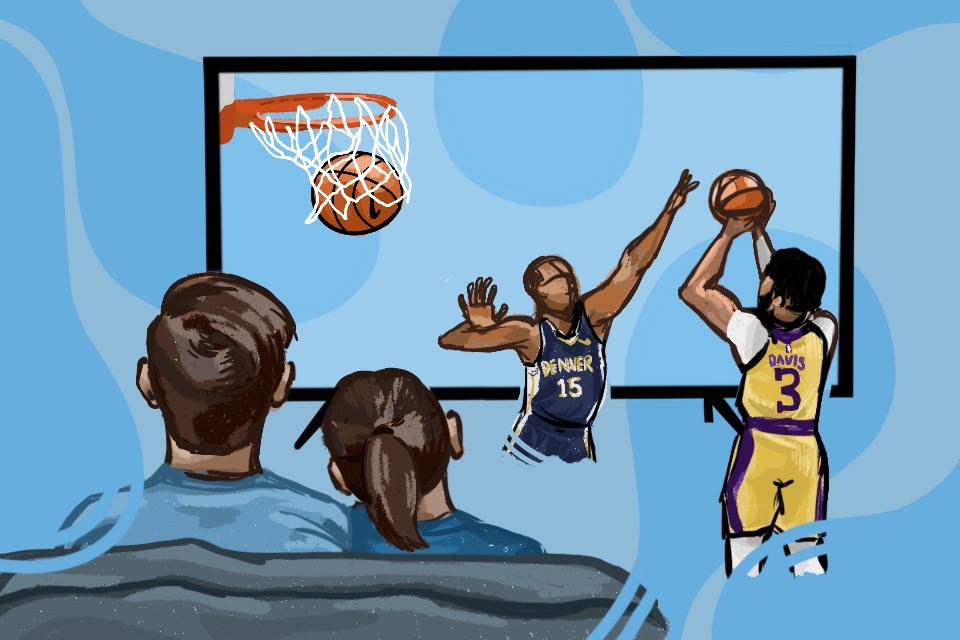 Sports fans ache to see this kind of finish. Down by one and with two seconds remaining, Anthony Davis pulled up for a three-pointer. It could not have been more perfect: The ball sailed cleanly through the net as the backboard buzzed red to signal the end of the game. Even from thousands of miles away, I could imagine the crisp snapping of the white cords as the ball passed through. My dad rose from his chair; I screamed. And it was only Game 2 of the Western Conference Finals.

In the NBA playoffs, the Game 7s are typically the most memorable. But I will never forget the moment of disbelief, which soon turned into euphoria, when Davis sank that three against the Denver Nuggets.

My dad has been a Lakers fan for decades. One of his favorite stories is meeting Shaquille O’Neal in a Phoenix bookstore; my father mixed up words as he tried to express his admiration for the 7-foot-1 star. I might have wrinkled my nose at my dad’s other favorite teams—the Rams and the Orioles—but for some reason I held on to the purple and gold of Los Angeles, even in the post-Kobe drought.

And during quarantine, the Lakers drew my dad and me together. In March, as the coronavirus began to rip through our lives, our family enjoyed countless movie nights. By the start of the NBA postseason in August, the charm of those viewings had long since worn away. I was bitter about missing a full semester in the city on top of the spring. My sister returned to in-person high school classes, and my father headed to work. I felt like my family members' lives had been restored while mine was still in limbo. When the Lakers started to pick up steam, my dad and I often turned on the television together or texted updates back and forth if he was still at the office.

In high school, I followed professional sports closely, but was less engaged during college. As I sat before ESPN, in a town I knew like the back of my hand, far away from the action of Columbia, I felt like I had reverted back to the seventeen-year-old version of myself. Static. Stuck.

I resented spending such a formative part of my life in my childhood room instead of the hustle and bustle of New York City. Watching Davis make that shot, though, sparked a joy brighter than anything I’d felt in months. Maybe it was the shock factor, or maybe it was watching something go right in a year that always seems to go wrong. It was a moment where triumph and agony balanced on a knife’s edge. One second, one motion, decided which reaction would prevail.

That game renewed my interest in the NBA bubble: the inception of such a project, the cost, what happened when the cameras weren’t rolling. I read about a delivery of chicken wings that resulted in a ten-day quarantine for the Sacramento Kings' Richaun Holmes. Miami Heat forward Jimmy Butler started a coffee shop in the bubble, charging a steep $20 per cup. The Heat’s assistant athletic trainer later challenged Butler’s monopoly with his own beverage business, slashing prices by 75 percent. More seriously, the league’s players donned Black Lives Matter jerseys and refused to compete in playoff games the day after Jacob Blake was shot in Kenosha, Wisconsin, bringing the social justice movement to the court.

But the NBA’s project was not the first bubble to catch my attention. Prior to the pandemic, I’d heard seniors bemoan the Columbia bubble on more than one occasion. “We didn’t get off campus enough during those four years, so make sure you take advantage of the city,” they would warn. Dutifully, I spent my first two years constantly attempting to escape campus with football games and food adventures in the Bronx, fencing tournaments in Queens, park trips and coffee shop visits in Brooklyn, and museums in Manhattan.

I missed those excursions while reminiscing in Montana, of course, but what I really wished for were distinct elements of the Columbia bubble, like an afternoon on Low Steps, basking in the sun and pretending to read for class. I wanted to play Frisbee on the lawns and host movie nights in our floor lounge. My friend and I even waxed poetic over the phone about the sticky floors of East Campus. It wasn’t the city I adored that was taking up space in my brain, but the people whom I had met and loved there.

In the Columbia bubble, I discovered a camaraderie difficult to find anywhere else. One of my favorite parts of college was my friend group’s end-of-night debriefing, when we all piled into someone’s dorm room to assess our respective days. To experience this sense of belonging was one of the great joys of my life. To have this bubble abruptly dissolved, and my community splintered across several geographic locations, was very painful.

The moment my dad and I leapt from our seats, half-shocked and in a state of bliss, was a reminder of what joy felt like. There was also a split second of guilt. In 2020, with tragedy and hurt constantly blitzing our world, is it even OK to be joyful? Tentatively I thought: yes, it has to be, right? What I didn’t consider until later was that as my dad and I celebrated, thousands of other people did, too. (And somewhere in Brooklyn, my Coloradan friend Calvin was probably devastated.) But that’s what sports do in their best and purest form: bring people together.

Moments like that stretch the limits of what is possible. In a moment of uncertainty, Davis was assertive. He controlled the moment. There was no doubt in his mind who was taking that last shot, Davis said in a postgame interview. Watching this confidence at home while struggling with what felt like a loss of autonomy in my own life, I couldn’t help but feel inspired. It felt kinetic… and also as though Davis was admonishing those of us who, up until 10 minutes ago, were splayed out across the floor in our college sweats, trying to remember what success felt like.

I loved that such a momentous occasion had graced our TV, and I loved being able to share it with my father. As Davis spoke, I looked at my dad. My father is also someone who controls the moment, but 2020 had hit him even harder than it had hit me. I wondered if Davis' confidence was energizing my dad, too.

As I watched Davis hoist the Larry O’Brien Trophy three weeks later, I doubted that the Game 2 moment against the Nuggets even crossed his mind. It had been a stepping stone, a prequel to this joyous, confetti-laden celebration. Everyone was yanking on the championship merch, grinning, hugging. Seeing this image of victory was a stark contrast to watching him hobble down the court a couple days earlier as a disappointing Game 5 drew to a close with Miami on top.

The MVP trophy was nestled into the crook of LeBron’s arm, but I had my eye on Davis. He held his daughter and smiled wide. His was a quiet kind of resilience, but it was unmistakable. When it was his turn at the mic, he didn’t lament the bubble, only alluded to the “ups and downs” of the year. He wasn’t invincible—other games in the series had shown us that—but he was tough, and poised, and he faced the situation instead of letting it control him. It wasn’t about the bubble. It was about being Anthony Davis.