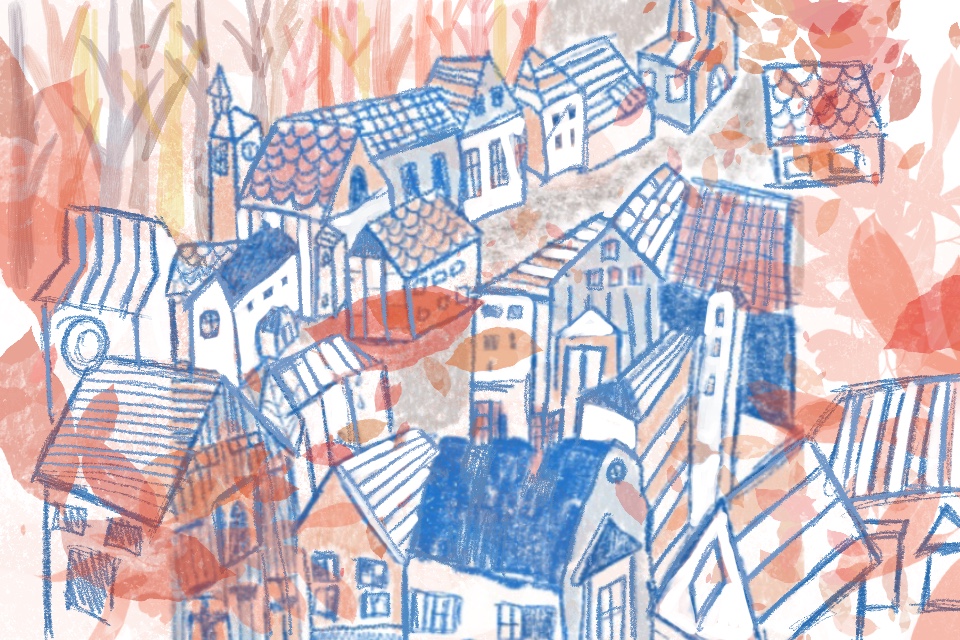 A few Octobers ago, I finally summited the endless flight of rickety metal stairs on the Manhattan side of the High Bridge and discovered a shock of red as my reward. It blossomed up from an enormous, crisp blue swimming pool, empty but for so many crimson leaves that coursed out over the edges of the pit toward the line of trees that still held their kin. The walls, the bleachers, every inch of concrete was painted deep red as though stained with arbor blood. I whirled around expecting to meet some other wide eyes, but seeing none, I realized that it fell on me to audibly honor that autumn day. I hadn’t planned to end my walk by shouting.

Loving autumn requires a certain earnestness and a willingness to be overcome by the world. I wish I still had it. Here in my bedroom in Providence, where I’m spending my strange senior year, the only curtain I have is a sort of white veil that I pull out of the way to expose the surrounding rooftops. There is my neighbor’s red brick chimney to keep me company, and behind it, four different trees that dance in four different colors of orange and green. They get redder as they get closer to my window, brilliant shades even beyond those I saw on that day in New York. I can only imagine how each blue beam of light that bounces down from space hears rumors of autumn from leaf to leaf and finally draws into my bedroom seeking approbation I will not issue.

My heart is broken, or my voice is caught in my throat, or maybe I’m just closed for the season. I wish I could step into the gleaming sociality of light and color that animates this place. I would go overboard. I would make it my lurid debutante ball.

I remember one of my last walks in Brooklyn, last October, when I arrived at an intersection where P.S. 100-and-something had let out for the day. Just as a sharp wind blew on my back and through my hair, children burst out in every direction, carried by the gust, chattering, leaves crackling under their feet. Kids whizzed by me into their brown and red row houses with orange pumpkins by the doors and then onward out the back to even greater things. The earth’s current of life is breathy and candid in autumn, like when your best friend from kindergarten runs up to you, grabs onto your hand, and tugs you around the corner toward something amazing that you have to see right now!

These days, when storm clouds sweep in off the Narragansett, the grey raindrops ring me like a bell. My flesh has hardened into a rigid shell which my inner child puts on like personal protective equipment against another March, April, May, June, July, August, September, October, 2020 surprise. I have to limit my undeliberate motions. If I venture too far on my runs, let the miles strip me down to my core reasons to breathe, I hear hysteria vibrating in the droplets that blow out of my mouth.

I have to limit my undeliberate motions. I am no longer my campus self, inclined to release his limbs for rustling in the November wind. Sometimes that wind would blow through off the Hudson, under the cover of darkness, and leave a warm mist across our Manhattan plateau that I would encounter pushing out of Butler Library in the wee hours of the morning. I would reach my arms out and swim up and around Alma Mater toward the bridge to East Campus. My feet would leave the ground to tread autumn air. It was a safer world then, when I could lose track of what I was and what was around me. I didn’t have to know all the time.

Every weekday afternoon, here, in my new reality, a class of first-graders barrel out of their school into the park beside my house to have some kind of recess. Sometimes, I’ll walk by and witness it myself. Children run out of reach of their teachers and orchestrate unknowable games, whirling around in a kaleidoscope of tiny sweaters. They gather up and throw heaps of fallen leaves that explode against their classmates in bright red bursts. I catch myself wincing. I can’t stop picturing all the shocks that will someday hit against their skin and cause real harm, chafe and rub raw, eventually harden into calluses. I hasten my pace to the indoors. The wind at my back chills me to the bone.