Claudia Conway Isn’t OK, and Neither Am I

Claudia Conway Isn’t OK, and Neither Am I 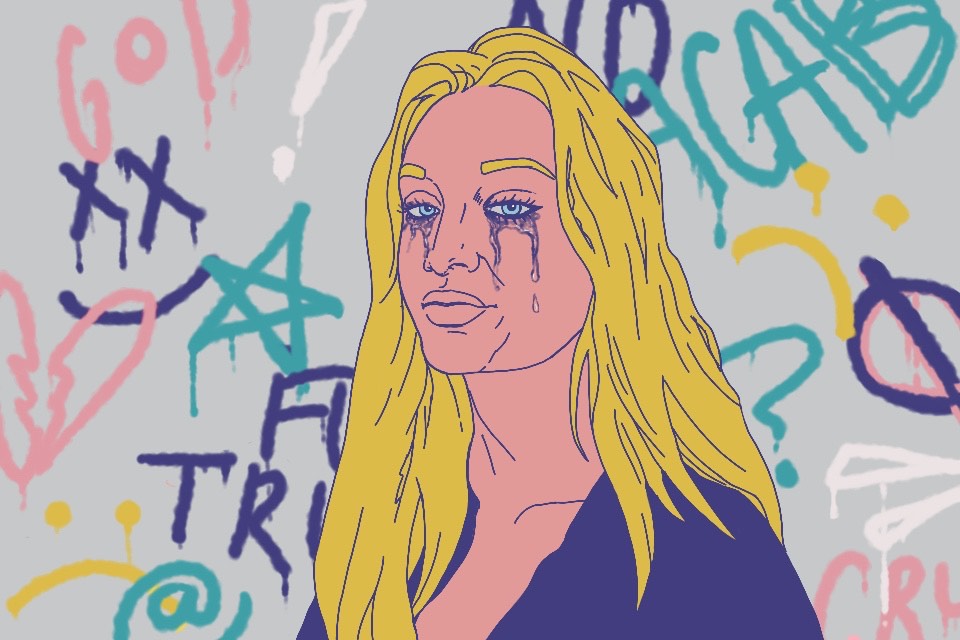 I am a little bit obsessed with Claudia Conway. The daughter of two public figures—one a spokesperson for the Trump White House, the other a notorious Twitter #resister—Claudia rose to prominence over the summer in lockdown. She found TikTok like the rest of us did. She quickly disproved any assertions that her parents actually got along, speculation that had long been purported not just by gossip magazines, but also by reputable newspapers. And almost as soon as the Internet became sure she was who she claimed to be, Claudia went viral.

In October, she issued reminders to wear face masks but later threw a large birthday party. Just a couple of weeks ago, Claudia auditioned for American Idol. Claudia is 16; she is full of contradictions, and no one should try to predict how her Internet self will develop as she grows up. I like her, though, because she doesn’t present her life as desirable. In fact, she pretty much claims to be miserable. Many of Claudia’s TikTok videos involve her openly crying, claiming to disassociate, or even being yelled at by her mother.

I admire Claudia’s willingness to be so visibly un-OK. Celebrities and politicians alike have tried their best to be relatable, or at least comforting, during the pandemic. They sang John Lennon’s “Imagine” together and shared photos cooking in their outrageously beautiful kitchens. But it is the Claudia I see in my TikTok feed, more than almost any other public figure, who has seemed to accurately express how I feel a lot of the time lately.

Claudia, to me, has felt like a breath of fresh air when I’ve spent most of my college years searching for public displays of vulnerability. I’m not the first person to say Columbia is a place both institutionally and socially hostile to weakness. Stress culture, inadequate mental health resources, and an inability to admit imperfections are some of our most enduring internal realities as a University. But this year, things are bad in an all-new way. For one, there’s a global pandemic. Columbia is not offering any in-person classes; Barnard canceled all student housing this semester. A good portion of students are not in New York City at all, let alone on campus. Many are, like Claudia, sitting in their childhood bedrooms.

Sometimes I feel like I know infinitely more and less about my peers. This year, I can describe their bedspreads more easily than I can tell you about their shoes, their water bottle stickers, or how they react to that particular moment in November when an evening snow hits during class. My classmates all exist to me in little virtual picture frames. I spend class wondering what sits just outside the frame. Are their mothers a couple of paces away? Is the white wall behind them in their dining room, or the kitchen, or even the attic? For those who live in the city, which roommate cooks most often in their apartment? Have they recently sat on a bench in Central Park and felt an overwhelming sense of smallness, like I used to do?

Mostly I wonder whether they, like me, sometimes feel like pausing class to scream out a window. I don’t do this though, and neither do they. We are excellent actors. We talk about what fun thing we did over the weekend. We discuss literature, politics, and history. My professor reminds us to make sure we use the “raise hand” Zoom function so that she can keep track of who’s speaking. In my most successful classes, when the professor issues an opening “hello,” someone is brave enough to respond.

Here are some things that have happened to me since March, though: I left the majority of my possessions in New York and the two jobs that I had for all of undergrad. I returned to my family in Arizona, who was in the midst of moving out of my childhood home. My mother left my dad for the father of my elementary school best friend. My dog died. I found out that my driver’s license had been suspended for three years and would require an $1800 payment to be reinstated. Barnard moved entirely remote and canceled undergraduate housing. I moved into an apartment with my dad and sister—which is where you’ll find me now.

Some of these events in my life would have happened regardless, and some of them are the direct consequence of the pandemic. Most of them loom larger now than they would have in a “normal” year. Still, I know I am not alone. I have friends whose parents have died from COVID-19 related and unrelated causes. Beloved community members have lost businesses that should have, by all predictors, continued for decades. An essential worker told me her job instructed employees to stop asking customers how they were doing. In a time where almost everyone was at the very least dealing with a pandemic, management informed her that it could be perceived as a microaggression. A customer service “how are you?” has probably never meant much, but I’m not sure the world is better without it.

I have long fielded comments ranging from family to acquaintances about how I seem like somebody “who has my life together.” Behaviors that elicited this reaction have varied. I wore a dress every day of the seventh grade. In high school, I usually juggled two jobs when most of my private school peers didn’t work at all during the academic semester. During my tenure as a Spectator editor, I brought my dinner packed in a Tupperware to get through long production nights. In other words, many of the traits that make up my “togetherness” respond to either practical need or simply personal preference—I have always liked dresses better than pants.

College and a pre-pandemic world allowed me to distance all different versions of myself. I think this is natural. There was the self that showed up to seminar; the self that talked to my family on the phone in a stairway; the self that bought granola at a bodega. These layers of distance all seem condensed, if not silly, now. Lately, I have wondered if “being together” is really a compliment. I especially don’t want to enforce the idea that coping “well” right now—whatever that means—is virtuous behavior. Who am I to keep up appearances for my gallery of framed Zoom classmates? My life is so much smaller than it used to be. I know their lives must be too. Personally, I am sick of the charade.

A couple of years ago I read a New York Times article about how to make friends, which I thought would be stupid. It wasn’t at all. The key, they write, is that after you meet somebody you have to divulge to them: You have to tell them something even slightly vulnerable. Some people, like Claudia, bravely divulge to the whole world (or at least to TikTok). I remember thinking that maybe this was why we were all so lonely at Columbia: divulgence so often can feel like weakness.

Recently, when people ask me how I’m doing, I’ve been trying to be truthful to the best of my abilities. This is to say that I have lots of wonderful things in my life. Last week, I baked the most perfect scones: round and risen, studded with massive blueberries, and glossy with a thick maple glaze. On my best friend’s birthday in October, we surprised him with a candle-lit dinner in the middle of the Sonoran Desert, with good silverware and a blue tablecloth, as if at any moment a towering saguaro could transform into a doting waiter. On Sundays, my sister and I bike to a local cafe, masked up, and cart home iced coffees in sealed mason jars.

But things are also terrible. There is no other way to say it. And what I find is that when I divulge to those around me, instead of being repelled, or unkind, they almost always respond with relief. They tell me something they didn’t think was fit for polite company before. Together, despite our instincts, we are working on being more visibly un-OK.