The “new normal” I had heard about for months was in front of me. I was eating lunch in an outdoor tent in mid-January, talking with classmates I had previously only seen in Zoom squares. I was grateful to experience a taste of campus life. I’d been home since March, but the comfortable warmth I felt seeing the lit trees along College Walk for the first time and building a snowman in front of Butler Library was the most at home I’d felt in months.

After that lunch in the tent, I needed a place to leave my compostable, single-use Columbia Dining bowl and cutlery. My one option: a trash can already overflowing with takeout containers, many of which still contained food.

But my uneasiness with the food and plastic waste I felt responsible for started before eating in that tent. Columbia Dining reported to EcoReps that it served upwards of 6,000 meals a day at the beginning of the spring 2021 semester. During the first two weeks of January, these meals were delivered to students living on campus in plastic insulated bags. The meals consisted of a large entreé, packaged fruit cups or salads, and similarly packaged desserts. Thinking of Lauren Singer, the zero-waste icon who packaged a year’s worth of trash into a single mason jar, I stared at the hill of plastic I created on a daily basis, full of guilt. Then, I stared at the uneaten food.

Without a minifridge, I tried leaving meals on the windowsill, hoping the drafty window would be an adequate substitute for refrigeration. When I took my bags, sometimes with extra food and often with abundant plastic, to the floor trash cans, overflowing bins again awaited me. I knew that on-campus dining, especially as a first-year, would decrease the agency I had in choosing and preparing my food, but I didn’t expect to feel helpless in terms of creating waste.

My guilt was two-fold. On one hand, my meal plan seemed to clash with my claimed passion for environmentalism. On the other hand, and perhaps more importantly, the excess food around me hardened the bubble I saw that separates Columbia from the surrounding community. COVID-19 has increased food insecurity, both by increasing the number of people in need of assistance and decreasing the number of open and stocked food pantries. Currently, only 35 percent of New York City food pantries remain open and able to serve all visitors, but pantries city-wide saw a 91 percent increase in first-time visitors from January to April 2020. 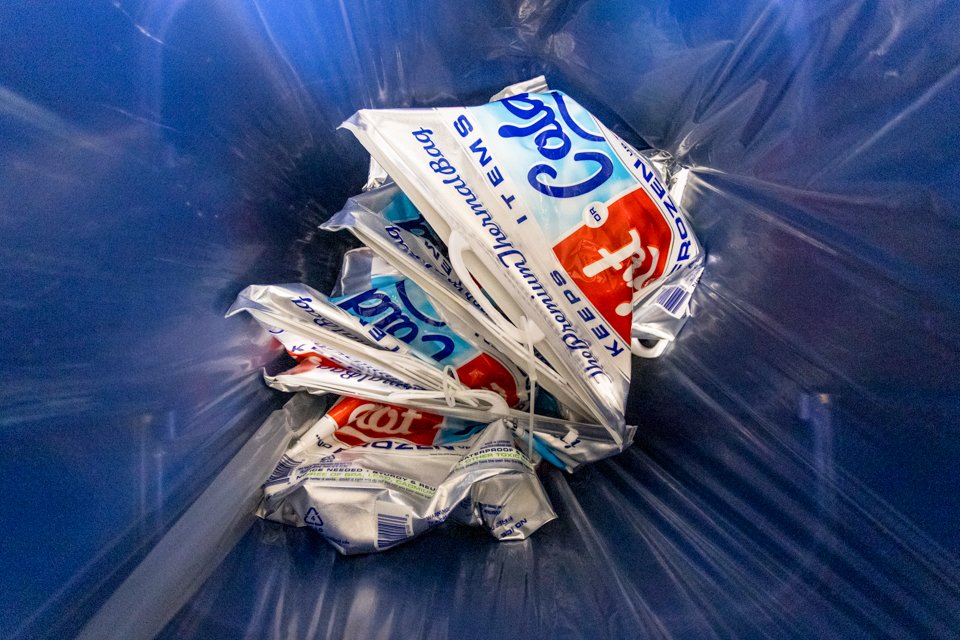 Columbia student groups, seeing this disparity, have organized around the goal of reducing food waste and redistributing extra items. For example, EcoReps organized donation drop-offs at Harlem Community Fridge and the Broadway Presbyterian Church, and both locations continue to accept donations. The Food Pantry at Columbia currently accepts nonperishable items, as does Columbia’s chapter of the Food Recovery Network, a national organization that redistributes excess food to food pantries and shelters. The students’ work, while critical and passionate, cannot eradicate food insecurity on its own, and the daily sight of trash bins overflowing with food remains disheartening to me.

At home, my family ordered takeout about once a week from our favorite kebab place. Its vegetable dinner platter was always piping hot after the car ride home from pickup, and it became a tradition of sorts. The environmental cost of our weekly habit: the five-minute drive, three compostable containers, and one plastic bag. Even before the pandemic, we didn’t usually eat out, instead opting to sit for a home-cooked family dinner each night. We’d cook for two hours, 20 minutes, or 30 seconds (if reheating leftovers in the microwave counts as cooking), but sharing a meal offered consistency and connection.

Whether our meals were homemade or from Maiwand Kabob, food waste was a nonissue. Maybe once a week I’d have to let go of the single serving of salad I forgot about in the back of the fridge. Yet at home in Baltimore, like in New York City, food insecurity increased in 2020. An organization I volunteered for, Food Rescue Baltimore, runs a similar operation to Food Recovery Network. Every Sunday, we’d collect donations from Baltimore Farmers Market vendors, sort out what was still fresh, and run a client choice model food giveaway.

In the month that I worked with Food Rescue, I learned that there is no specific look to food insecurity, not in appearance or the clothes a person wears, nor in age, race, or life experience. So, while some Columbia student efforts focus on distributing food to the Morningside Heights and West Harlem communities, others focus even closer to home. Between 114th and 120th streets, members of the Columbia student body don’t have access to 21 balanced meals a week.

The Food Pantry at Columbia, a free food resource open to Columbia students, has helped provide meals to over 1,400 students. The pandemic, like in the city as a whole, has increased food insecurity in the Columbia student body. The Pantry issued 2,750 disbursements in 2020, about the same amount as from 2016 to 2019 combined.

On an institutional level, Columbia Dining partners with City Harvest to donate food. However, due to City Harvest’s restrictions, Columbia Dining isn’t able to donate all excess food. For example, the organization is not able to accept items that have been served on a buffet table. Barnard Dining, on the other hand, has worked with Columbia’s chapter of the Food Recovery Network to collect extra nonperishables in bins outside Barnard dining halls and cafés including Hewitt Dining Hall and Liz’s Place. While Food Recovery Network has reached out to Columbia Dining to begin similar collaborations, no project has begun to date.

From a sustainability standpoint, the compostable single-use containers in which Columbia Dining serves meals are little more than greenwashing: Without designated compost bins to place these containers in, they will end up in landfills, where they do not disintegrate. As a first-year, I assumed this plastic use was the exception made in the name of COVID-19 safety. However, I learned from speaking with EcoReps leaders that disposables are the norm, not a 2020 exception.

Before the pandemic, reusable dishes and cutlery were used only in John Jay Dining Hall. Columbia Dining discussed with EcoReps that other dining locations, such as Ferris Booth Commons or JJ’s, had logistical, dishwashing constraints and thus used disposables.

In terms of food waste, back-of-house waste—food waste created during the cooking process—was composted in all Columbia dining halls, and front-of-house waste—produced by students—was composted in John Jay and Ferris. This compost was processed in part by the New York City Sanitation Department and in part by private contractors. A pandemic-induced budget cut to DSNY, however, ended its curbside compost collection program until June 2022.

What could I do with the slowly-growing monster of compostable bowls hiding under my bed? Actually getting them composted would be tough. The New York City Food Waste Program, for example, accepts food scraps but not compostable containers, and dropping off these scraps would require a hefty off-campus trip. The glimmer of hope––is there something smaller than a glimmer?––in my daily waste conundrum is that I can recycle my plastic fruit cups, and I know that they’ll be processed locally.

Every time I enter John Jay, my mind still races––how many years would it take for any bowl I eat from to disintegrate in a landfill? How many disposables am I using per meal swipe, and how many meal swipes am I using per semester? What if I make one fusion bowl and one salad last two meals and save a bowl? What difference will that make? Do I try a new entreé? If I don’t like it, I will have to finish it. Could I pack a to-go bag for the man by the halal cart who asked for spare change? There are so many corn muffins––does anyone like corn muffins?

It’s admittedly a first-year rite of passage, figuring out which black bean burgers from JJ’s are great and which breaded tofu options are… less great. Added to the food choice dilemma this year, however, is a heightened awareness of time and place. On almost every scale––globally, nationally, city-wide, in our neighborhood of Morningside Heights––food insecurity is more of a pressing issue now than it was a year ago. The increased urgency in making sure everyone gets enough food makes having too much seem worse to me, and the environmental cost of both wasted food and disposable containers—landfills comprise 15 percent of methane emissions—adds insult to injury.

Again, I’m inspired and excited by the students working on addressing these issues in our dining system. Groups such as EcoReps, FRN, and the Pantry have both helped me feel less helpless about and actually reduce the amount of waste I produce when using Columbia Dining services. FRN and the Pantry, for example, are accepting volunteers to recover food and package online orders. I’m not sure how many other people get “dining hall guilt,” and I’m not sure to what extent it will go away when the compost bins return or John Jay has sit-down service. At times, I’ve been tempted to accept the current waste problem as an unfortunate but necessary consequence of the pandemic, but this acceptance would accomplish nothing other than temporarily assuaging my guilt. I can only hope that my new habit––a daily reflection of how much I use and where these items go when I’m done with them––will stick around then, when and wherever I find myself confronted with the next “new normal.”