The Price Is Not Right: After Decades of Rising Tuition, Students Ask Themselves if the Diploma Is Still Worth the Cost

The Price Is Not Right: After Decades of Rising Tuition, Students Ask Themselves if the Diploma Is Still Worth the Cost 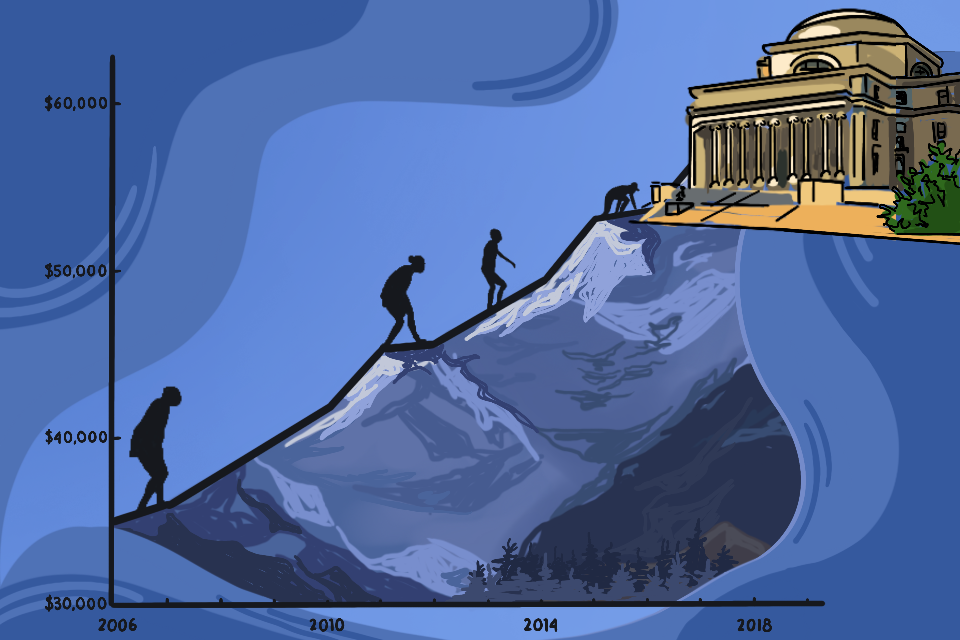 For Calin Lisenbee, a student at the School of Nursing, Columbia held the promise of financial stability and success. Lisenbee dreamed of becoming a nurse and midwife, and Columbia’s competitive doctoral program was the key to kick-starting her career. While she was initially hesitant about the high cost of tuition, Lisenbee felt that the world-renowned education and the promise of good job prospects after graduation was worth it.

“The name of Columbia on your doctorate goes a lot further than other universities. It’s known internationally,” Lisenbee says.

But when COVID-19 hit, Lisenbee’s relationship with Columbia changed. For her and many other students, remote learning during the pandemic sparked a reevaluation of their willingness to finance a Columbia education, especially one that is now unable to provide her with patient interaction and hospital exposure— cornerstones of health care education.

Financing a Columbia education—the nation’s most expensive university during the 2020-21 year—has become more difficult in the midst of the pandemic and economic turmoil. The Columbia tuition strike comes at this moment of economic crisis with demands that the University reduce the cost of attendance by at least 10 percent; increase financial aid by 10 percent; and replace the “student responsibility,” a tuition contribution students or their families are expected to make, with grants.

Despite the petition gaining over 4,000 signatories and earning national attention, Columbia has yet to concede to students’ demands. The University’s refusal to lower tuition, even in the midst of a pandemic, reflects the commodification of higher education, making the University a highly desirable product that is entangled with students’ dreams of social mobility.

Since the 1980s, tuition at American universities has increased exponentially, but despite the exorbitant price tag, more Americans are college-educated now than ever before. In the past half-century, higher education has become increasingly necessary to have a high-paying job or even many entry-level jobs that did not require college degrees in years past. At Columbia and other Ivy League institutions, this dream of social mobility and financial stability is exaggerated; low-income students in the Ivy League have a significantly better chance of entering the top 1 percent than their counterparts at other schools.

Emmaline Bennett, a first-year at Teachers College and co-chair of the Barnard-Columbia Young Democratic Socialists of America, has become disillusioned with Columbia, no longer seeing it as the catalyst of social mobility she once did. Saddled with debt, Bennett estimates she will spend about half of her disposable income each year for the following decade to pay it off. In the end, she feels as though a Columbia education will not bring her financial stability and the prestige will not be worth the economic and emotional turmoil.

Robert Wolff, professor emeritus of economics at the University of Massachusetts Amherst, believes that Columbia and its peers have long taken advantage of their students, knowing that most are willing to pay excessive amounts of money for the prestige and greater financial security that come with an Ivy League degree—even during a pandemic. It is for this reason, Wolff says, that Columbia can get away with charging such a high price and ignoring the demands of the strikers. Wolff argues that with 40,000 applicants and just around 2,500 admitted students in 2020, the University can keep tuition high without risking any significant repercussions.

“Students are told over and over and over again how lucky they are to have gotten into Columbia. It’s the greatest accomplishment of their life. It’s going to make their lives wonderful. I don’t think when you’re in that situation you’re liable to start demanding price cuts,” Wolff says.

For Bennett, Wolff’s words ring true. As an undergraduate, Bennett associated highly selective universities with prestige, which was the best pathway into a good doctoral program and her dream job as a professor. Now, Bennett has shelled out more than $90,000 to afford her Teachers College education.

“Social mobility is a myth. When you’re going into so much debt and don’t even have an actual job to rely on [after] graduation, even at a place like Columbia, it brings home just how important [it is to have] education as a human right,” Bennett says in support of the tuition strike.

At Columbia, this struggle is often amplified for graduate students like Bennett, who do not receive full need-based assistance. For some undergraduates, tuition also often remains a struggle with little aid. The School of General Studies also does not offer full need-based assistance to its students, which increases the amount most students are expected to pay. In comparison to the average grant size of $52,073 at Columbia College and the School of Engineering and Applied Science, the average grant size at the School of General Studies, $18,000, is miniscule. In order to make their dream of a Columbia education a reality, many General Studies students put themselves through great economic strife.

For Gilbert Manda, a General Studies student, the price of a Columbia education was homelessness. Having forgotten to sign a financial aid document at the beginning of the 2018 fall semester, Manda ended up not receiving any institutional assistance from the University for the rest of the year. Slapped with penalties and no longer able to register for classes, Manda soon owed the University $20,000.

“I am in this country as a refugee. I finished the 2018 fall semester sleeping on the streets. I was homeless while attending school. I applied for a scholarship for the displaced and I was declined. I am sharing this information with you to highlight how impervious Columbia is to students’ problems,” Manda says in a testimonial supporting the strike.

Students at Teachers College are billed 16 percent of their annual tuition for any outstanding balance after an initial $50 late fee.

Facing a potentially harsh reality, Lisenbee never truly believed that the tuition strike would result in substantive action. Lisenbee was unable to participate because of loans, so her support of the strike was symbolic. She hoped to demonstrate that the cost of higher education is unacceptable by speaking out about it.

It’s not just Lisenbee who feels hesitant about the strike. In his more than 40 years at Columbia, Professor Robert Jervis has seen many similar protests come and go and remains doubtful that this tuition strike will succeed. With students constantly funneling in and out of the University, it has been difficult for them to build a long-term, substantive movement. As soon as students graduate, he argues, they are quick to forget their on-campus actions, something he admits to have done. In regard to the student debt crisis and tuition prices, he does not see a clear end in sight.

Nonetheless, Lisenbee believes the strike is important. She worries that if college tuition continues to remain so unsustainable, her kids, who are not even teenagers yet, will be unable to afford a university degree in the United States.

“Even though I couldn’t necessarily participate in the strike, it feels important for the future. If this movement has any success, I hope my children will be the recipients of it,” she says.