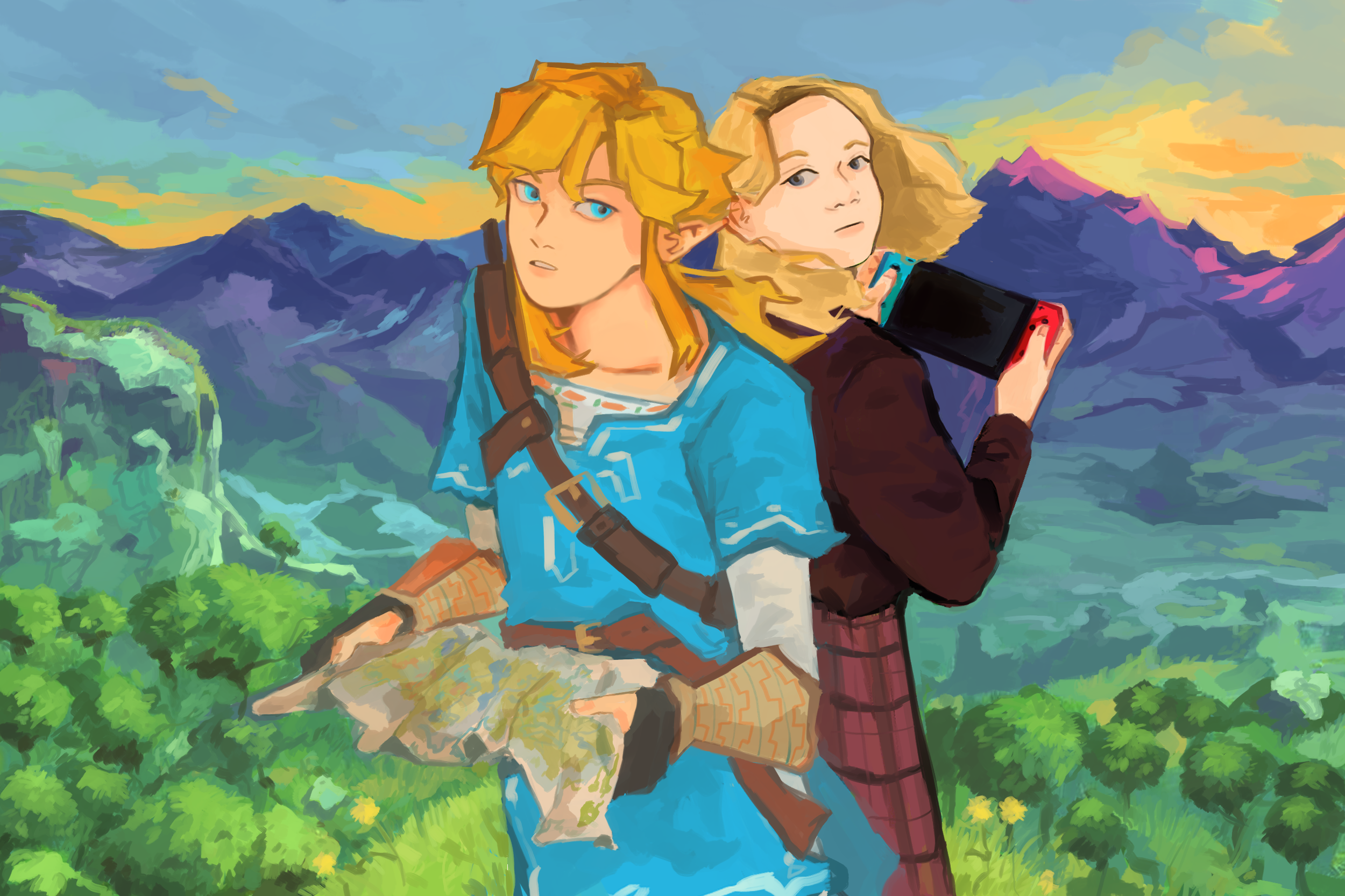 I first played The Legend of Zelda: Breath of the Wild at the end of 2018. I had received a Nintendo Switch for Christmas after hearing my friends gush about the new console for the past year. The newest installment in the Legend of Zelda franchise was the game of 2017, and since I had a soft spot for 2011′s The Legend of Zelda: Skyward Sword, I knew it had to be the first game I bought for my Switch. Within an hour of the tutorial, I was in love. The freedom of the open-world gameplay, while not a new concept itself, was new to me. If I was bored with one area, I could run, climb, or ride my way to another, so the game never lost my attention. After beating the main story, I dished out 20 bucks for the bonus content—it was an obsession.

But after winter break, high school commitments, college acceptances, and the desire to see all my friends before we scattered in the fall forced me to leave the game idle in my room for a few months. Knowing it was on my Switch, though, was comforting—Link and Zelda would be there when I was ready for them.

In November 2019, I got the news that my friend from high school had died. My world was rocked. I realized, after doing the math, that I had known him for a third of my life, a fraction that—from then onward—would only shrink.

Almost a month later Barnard student Tess Majors was killed. Death seemed to plague me; it was in my hometown, in the high school I had just left, and it had followed me to my new life at college too. Suffocated by our grief, the people I knew from home said nasty, ugly things to me and to each other. My sadness, my hurt, twisted and cracked into what I would recognize months later to be trauma. When my hands were empty and my mind was idle, all I thought about was what I had lost.

As I first learned to live with my grief, it exhausted me. One day, that December, it tired me to the point that I could not get out of bed to attend my classes. I had no energy, and while I was at school, away from my support system, I needed something to channel my grief into. I picked up a video game.

In Breath of the Wild, you play as longtime protagonist Link. He has been the hero since day one of The Legend of Zelda saga. His motivations change from game to game; sometimes he wants to save his sister, sometimes he wants to save his childhood best friend. Regardless of the motivation, he is always ready to take action and help. At the beginning of Breath of the Wild, Link wakes up from a 100-year slumber and is told that he was asleep because he died trying to save the kingdom of Hyrule. Almost immediately, Link is saddled with the knowledge that he failed to protect his world, and that there was a human cost to his failure. Link is given grief and loss to deal with, just as I was. And then he is sent out to try to save the world all over again.

I think I returned to Breath of the Wild because I remembered the excitement I felt at the game’s expansive map, and I knew I hadn’t covered the whole thing. As I wandered around Hyrule aimlessly, the world of the game changed for me. Since I was already familiar with the landscape, I no longer felt a sense of wonder from pure exploration. Instead, I noticed the details the creators had woven into the background. I saw the demolished houses. I found what was left of a ranch. I identified the evidence of ruin and destruction and death scattered around. The game was not about the thrill of exploring new lands anymore, it was about navigating a world defined by loss.

While my day-to-day stakes were much smaller than keeping a kingdom from falling into the hands of malice, every day I went out that winter felt like a burden. I deferred my only exam that semester, unable to concentrate on studying when the noise in my head was too loud. Even when I was home for break, making simple plans with my friends was a chore. Life felt too overwhelming, too alive while I was working through loss. But, through Link’s journey, I learned to live with the burden of death. When Link woke up from his fantasy cryobath, he could not reverse the past. He could not save the lives that had already been lost. He could only continue to work forward and try to turn a land wracked by grief into one where people could prosper—I had to learn to do that myself.

I could not tell you then if I felt like I was controlling the world of the game or just witnessing the story, but I think it was a combination of the two. Grief is tricky. It robs you of your agency; mentally, you can only focus on who you have lost, and physically, you are drained. Playing Breath of the Wild allowed me to take a break from that. There was a narrative to follow, like in a movie or TV show, but my control over where Link was, what he fought, and how he went through the world allowed me to regain some of the autonomy I was missing. I didn’t feel like I was the hero, though. Link is an established character. He has his own motivations and his own traumas—they just happened to be similar enough to mine that I felt a kinship with him. I did not know I needed a guide through my grief, but my trust and love for Link allowed him to be just that.

When a friend asks me what my favorite part of the game is, I always say the “From the Ground Up” side quest. After you save an old house from being turned into another Levittown look-alike, the construction company enlists you to help build a town in Akkala, the northeast region of Hyrule. You alternate between collecting bundles of wood for the foreman of the project and enlisting unhappy villagers from other towns to open businesses in the newly created Tarrey Town. Along the way, the foreman and the clothing shop owner fall in love, and the finale shows them getting married in the town you helped to build, surrounded by the people you made a community for. It is one of the most beautiful quests I have ever seen in a video game.

When I first played it, I loved the quest for its sweetness, which games set in a post-apocalyptic world usually lack. But when I returned to the game at the end of 2019, every time I stopped at Tarrey Town, I couldn’t help but view it as a choice Link actively makes in the game. In a world of suffering and loss, the hero takes a break from slaying monsters and trying to defeat the great evil in the world to make happiness for others. After all, what is the use of saving the world if those who live in it are miserable? As I worked on my trauma and pain, I saw Link working through his own building Tarrey Town. He built houses and found those in need, offering the protection and safety he failed to ensure so long ago.

And as I watched him do it, and as I did it myself, I realized that a way to take yourself out of the gloom and doom is to find the people who understand your hurt. I reached out to my friends, let them in on the grief that was keeping me up at night, and found that they were struggling with the same things. We all missed our friend, and while we could not build an entire village together, we could form a community, just like Tarrey Town.

A controversial feature of Breath of the Wild is the blood moon mechanic. On random full moons, monsters you have defeated are brought back to life. Death is seemingly impermanent in Breath of the Wild. Loss is temporary. But in the cutscene when the goblins and skeletons are reanimated, their resurrections take place in front of the ruined villages. The harm the player inflicts on the bits and bytes may be impermanent, but the ancient loss of the fictional world runs much deeper than what the blood moon could bring back. Some players despise the blood moon; they feel like it makes their progress moot. But I have never minded it. It keeps the landscape interesting, and it reminds me of the progress I know I have to make on myself: Even when it feels like all my demons have come back from the dead, I know I have worked through them before, and I can again.

Maybe the value of a video game should not hinge on its ability to give us the story we want to hear, but I will always be grateful for how this game grew with me and was what I needed it to be exactly when I needed it. Like any good media, video games should allow a player to interact with the story in different ways as they mature and glean just as much value from it each time. Maybe in another six months, I will come back to the game and see how it is a commentary on the ways women may be missing from narratives, or how a homogenous world is doomed for destruction, but for now, I play this game to remember that healing and death can exist in the same place, in the same person.