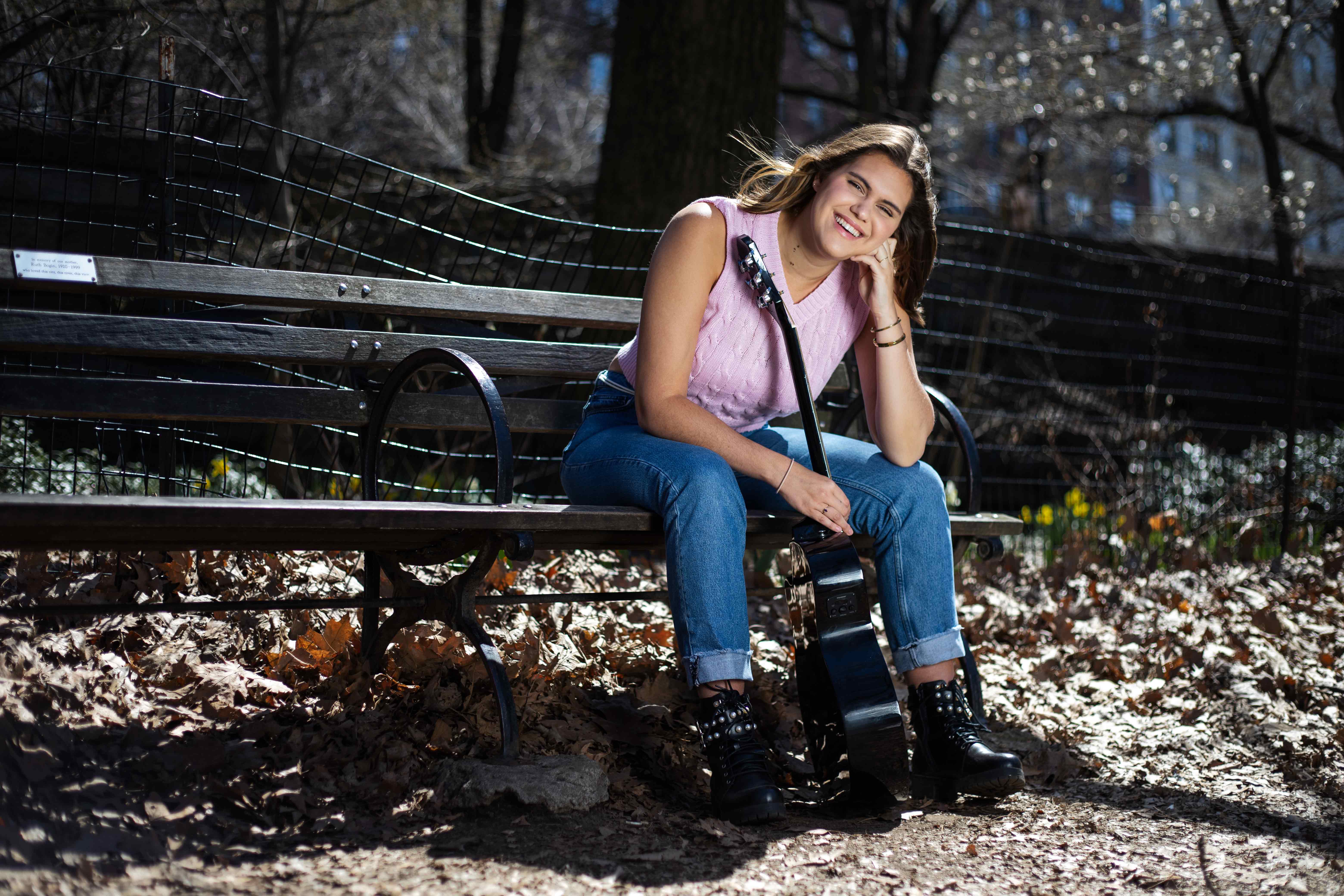 Eva Westphal drinks caramel coffee in the morning: a medium Dunkin’ iced coffee with caramel swirl and cream, to be exact.

“It’s God herself coming down to me through that freaking straw,” Westphal explains.

The Columbia College sophomore and singer-songwriter procures her drink of choice at least a few times a week to remind her of home. She describes her Dunkin’ habit as “Number 1 Bostonian shit,” but notes that not long ago, her relationship with the chain and the drink itself looked starkly different. Westphal was hesitant to display her authentic desires, emotions, and persona in high school, which manifested not just in her lack of a signature coffee order, but also in a deep sense of insecurity and struggles with eating disorders.

Westphal’s identity was lost in a sea of perfectionist ideals and plastered smiles, and Dunkin’ was swept away with it all. She constantly surrounded herself with friends to limit the time she spent sitting with her thoughts; eating disorders deterred her from ever indulging in small joys such as sweetened iced coffee. As a consequence, her ability and motivation to perform wavered with her energy levels during her greatest periods of struggle, yet, Westphal never lost sight of her greatest therapeutic tool: music.

Today, when she shares song clips with her 50,000 TikTok followers, the songwriter has no shortage of fans who find listening to her music as healing as it is for her to write it. She began publishing her music on Spotify in 2017 and most recently released “Dear Anna” and “Morning Shower,” where she sings about finding strength through a harmful relationship.

But before her recent release came thousands of hours spent listening to Stevie Nicks, Brandi Carlile, and classical symphonies in her childhood home. Westphal grew up surrounded by a “friendly battle for the aux cord” between her mom’s Puerto Rican family and her dad’s German heritage all nestled in downtown Boston. Classical music was a consistent feature in her household, as she began playing the violin at the age of six alongside her four younger brothers. Westphal first entered the world of contemporary music when she asked for a guitar for her 13th birthday. The poems she scratched into her third-through-seventh-grade notebooks were transformed into melodic recounts of her adolescent life.

“[Music] was a safe part of my life where I could just be myself and process anything that had happened to me or how I was feeling,” she explains. “It was not contingent upon anyone else; it was a thing I had all to myself.”

Her musical outlet provided Westphal with a break from her day-to-day people pleasing. For her, the ins and outs of middle school and high school seemed to require constant surface-level happiness and a forced smile. She recounts her mother explaining that “there was something off about her that you can’t really place your finger on; she feels uncomfortable in herself in some way.” Her songs functioned as a portal to such displeasure.

When an opportunity to share her music with an audience presented itself at her high school’s first-year talent show, Westphal anxiously signed up to perform. She decided to sing an original song but resolved not to mention the name of the artist. It was better, she thought, for the audience to assume it was a cover.

“What if they read into it? What if they know exactly what I’m talking about?” Westphal worried.

Her lyrics detailed a period of her life when she felt unsure of herself, and they were “sadder than [she] seemed,” she says. Falling back on the facade of someone else’s lyrics felt safer for the embarrassed first-year.

Luckily, or unluckily, for her, people did know exactly what she was talking about. Westphal received a slew of questions from her peers and other audience members about whether or not she wrote other songs and, if so, when they would get to hear them.

Although she had shared one song, the scope of her emotional depth reached far beyond what she could share in those few lyrics—a double narrative of Westphal’s character was thus created. At school, she appeared to be the “smiley, happy girl with the VSCO filter.” At home, she was recording and sharing musical recollections of her deepest, most genuine feelings.

“In real life, you can’t just randomly start talking about your problems, whereas I can release a song where I’m talking about my problems and it’s totally fine,” she explains.

As she received increasingly positive feedback about the vulnerability she displayed in her music, Westphal came to embrace her identity as a singer-songwriter in high school. Her songs felt authentically hers more so than anything else in her life—they grounded her in her passions throughout the academic and social pressures of high school. As Westphal puts it, her music is the “popcorn kernel” of her identity.

Even as Westphal grew more comfortable with public vulnerability, songwriting was not always enough to keep destructive patterns from controlling her life.

She attests in an Instagram caption, “Bulimia completely took away my voice and anorexia left me weak, unable to stand on stage and hold my own. I know that without the motivation to sing again I wouldn’t have fought so hard to recover.”

Along with inpatient treatment and support from her loved ones, Westphal turned to music for healing. Her song “Body is Home” explores the painful desires she felt while living with her illness: wanting to “fix [her] stomach and [her] nose and change the way [her] body grows.” Yet, she reflects further, writing, “Would you say the things you tell yourself to a stranger, a friend, or anybody else?” Completing her chorus, Westphal expresses a mantra she learned herself through recovery: “Your body’s home. Why do you burn yours down?” Although progress is not linear, the songwriter reflects on learning to love herself exactly as she is.

The long fight through her eating disorders in high school came alongside choosing a college. Although given the opportunity by prospective music schools to pursue songwriting full time, Westphal decided that a traditional academic experience would allow her to stay true to her method of producing songs, and thus she selected Columbia College.

“I realized I wanted to write songs about my life rather than have my life be 100 percent music.”

Attending college in New York City has certainly provided her with such an experience. Even during a pandemic, moments as simple as playing card games with friends or watching WandaVision with her roommate will introduce a fully-formed piece of a song into Westphal’s mind. She identifies these as her “moments of gratitude.” Whether it be a verse and a melody or just a chorus, Westphal says that these instances of genuine emotion are what motivate her songwriting.

Westphal’s melodies have always transported her to a safe space of self-expression; now Westphal is applying such principles of vulnerability and truthfulness to all facets of her life.

“That goes from everything from only making sure I’m spending time with people who add some sort of positive influence or learning experience to my life and who cut out the ‘BS,’ to being intentional about the food I eat.”

In the past year, Westphal has embraced her identity as a lesbian in her wave of intentionality. She explores her realization in “I’ve Never Written a Song about a Boy,” where she remembers telling her parents at six years old that “There’s no way in hell I’m getting married, you’re gonna have to drag me down the aisle.” From this kindergarten experience to her middle school dance, she realized, “I must’ve written 500 songs, have calluses to prove it, just me and the music; but something always just felt wrong, words without a tune, a wedding with a groom; then I realized, I’ve never written one song about a boy.”

Westphal’s newfound identity opened up a world of songwriting opportunities: while she never felt called to write about love before, it is now Westphal’s mother’s favorite topic to hear her daughter happily singing about. The discomfort she sensed within Westphal seemed to dissipate through her eating disorder recovery and coming out of the closet.

“It feels like there was a piece that was sideways and it righted itself,” Westphal explains. “Oh, this is the machine that I was meant to be now that I worked out the kinks in the system.”

“I’ve Never Written a Song About a Boy” has over 100,000 streams on Spotify, and such authenticity has led to the development of an international group of supporters—she boasts that 96 percent of her TikTok audience is women. Her primarily-female fanbase has fostered a space for positivity and self-expression.

Westphal is frequently sent thankful and sentimental notes in her Instagram direct messages, which she saves in a folder on her phone. In one of her favorite messages, a listener writes, “Tonight I finally got the chance to sit down and listen to ‘Body is Home.’ Only a few seconds after the song started I started bawling tears of joy and happiness. Just in September, I was hospitalized for my eating disorder and I have since been in the long recovery process … Your talent is powerful and I want to say thank you for sharing your story in such a beautiful way that I’m sure has reached many others like me.” To feel she has reached another through her music is to feel connected and validated in her struggles.

While Westphal’s message of wholehearted authenticity might one day resonate with a wide audience, she says that she would never want a fanbase larger than a few hundred thousand people in order to maximize her ability to truly connect with others who relate to her music.

In terms of meeting those outside of her Columbia and New York community, the switch to digital music promotion that came with COVID-19 has bolstered her success. Her introduction to TikTok upon her return to Boston from Columbia in March 2020 was accompanied by a period of deep emotional analysis and quarantine boredom. While Westphal is certainly disappointed she cannot engage with the New York City music scene, her songwriting remains what it always has been and always will be: an exploration of her authentic life.

“I’m going to be 85 and going to be writing songs in my room. I know that for sure,” she proclaims.

While her online fanbase and ability to pursue her truest self grow simultaneously, Westphal is paying close attention to the “moments of gratitude” which inspire her to reflect on her progress in recovery and personal discovery. Her latest song line came to her on her weekly Dunkin’ run:

“It hits me when I ask for caramel in my coffee.”