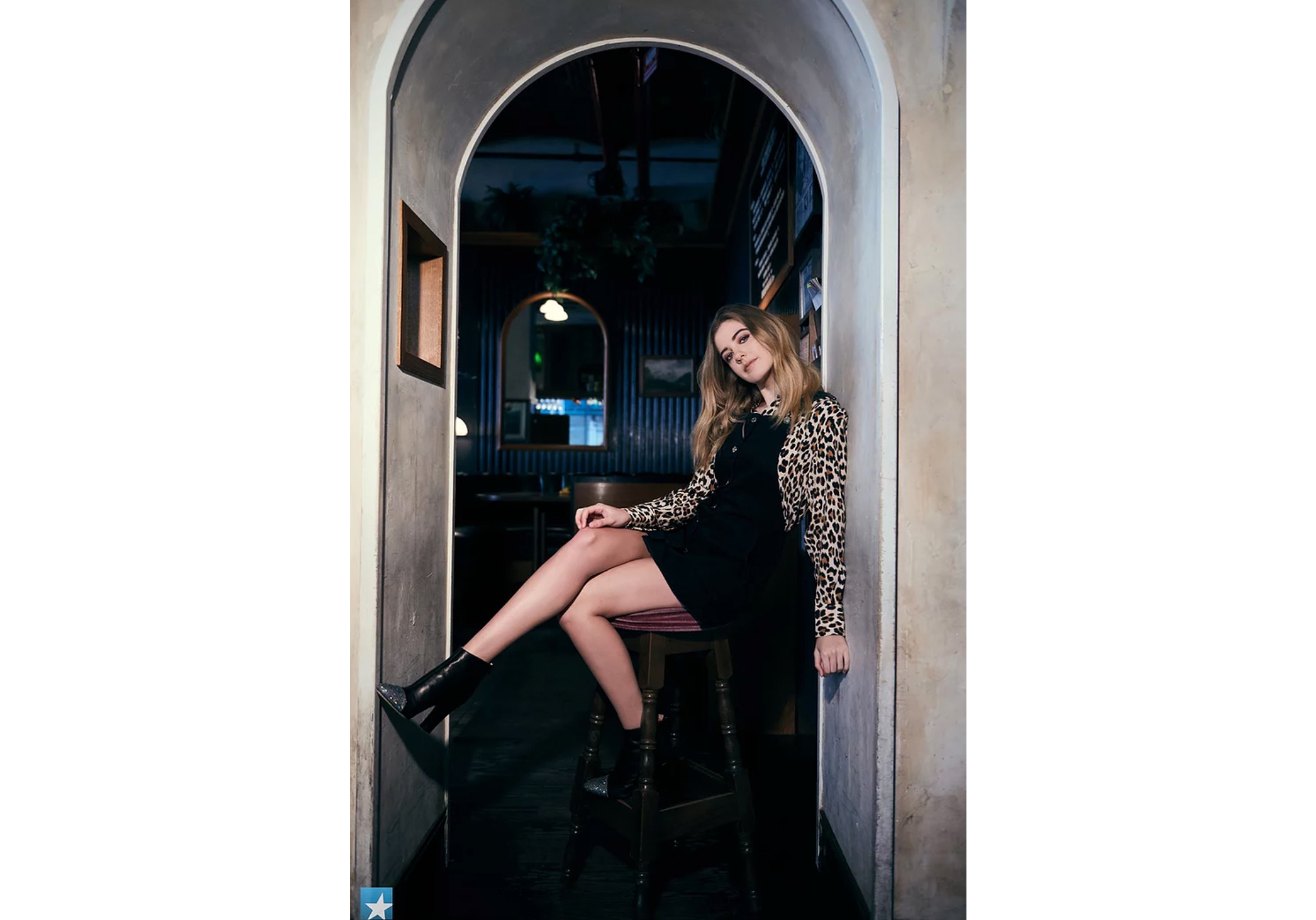 As Mallory Bechtel, GS ’24, sits in her childhood bedroom, I see four posters from musical theater productions behind her: Les Misérables, White Christmas, Bring it On!, and Whistle Down the Wind. The last, she tells me, was her first professional show—at the ripe age of seven, she was pulled from the training program to join the ensemble for the Houston leg of the 2007 U.S. tour.

14 years later, Bechtel is a bona fide Broadway star. She gained attention for her role as Zoe Murphy in Broadway’s Dear Evan Hansen in 2018. Her studio performance of the Dear Evan Hansen’ number “Requiem” has 4 million views on YouTube.

Bechtel has loved singing for as long as she can remember, and her interest in acting bloomed right after she joined the Humphreys School of Musical Theatre in Houston. Her parents discovered she had a knack for singing after one of her ballet classes, when her teacher asked the class to sing a Christmas song for the parents.

“I came home very upset because, I said, the other girls sang it wrong,” she recalls.

Soon, Bechtel’s mother began uploading videos of her singing, and she has since garnered over 3 million views on YouTube  featuring covers and performances from her early years.” At 11, she was scouted by her current manager and by the time she was 18 and graduating high school, she bagged a full time role in Dear Evan Hansen on Broadway.

Before she took over the role of Zoe Murphy, Bechtel was the vacation understudy for original cast member Laura Dreyfuss. She would miss classes and final exams to fly up to New York from Texas in order to rehearse for two weeks at a time and then to cover for Dreyfuss and be on call for a week.

“The job is to do it like Laura Dreyfuss because if you were to go on, you can’t make a wacky decision because there are people who are also on stage and they’re expecting a certain thing,” she explains.

Producers told Bechtel that she was on track to replace Dreyfuss as she began applying to college in 2017. She was ready “to drop everything” and not go to college, but her parents convinced her to still apply should the plan fall through. Bechtel was accepted into Playwright Horizons Theater School Studio at New York University’s Tisch School of the Arts, which she deferred for a year as an “extreme backup plan” after she signed her Dear Evan Hansen contract.

“Just in the case that I ended up leaving the show and having an insane craving to go to school, which funnily enough, I did not. That didn’t come until later,” she says.

Playing Zoe Murphy full time instead of as a part-time vacation understudy left Bechtel feeling like she had more freedom to experiment with the role. She first performed opposite experienced stage actor Taylor Trensch as Evan Hansen, but soon the titular role was taken over by rising star Andrew Barth Feldman, who is similar in age and experience to Bechtel. After she first broke onto the Broadway scene as a vacation understudy, she felt much more confident doing auditions.

“I remember thinking, ‘I’m never, ever going to be nervous walking into [an audition] again.’… I felt like I had kind of gotten my toe in, and I say this knowing that before I was in Dear Evan Hansen, I got so, so, so unbelievably nervous for auditions,” she says.

Bechtel was due to star in Bye Bye Birdie as Kim McAffee at the Kennedy Center in Washington, D.C., when theater productions around the world were halted indefinitely by the pandemic. She was about a week away from beginning rehearsals for Bye Bye Birdie, and counts herself lucky that the rehearsals or the show itself did not begin before the closing.

Bechtel discussed her friend Samanatha Williams, who was supposed to open as Emmie Thibodeaux in Caroline, Or Change: “[They] had just barely done any shows. … I would be tearing my hair out if I were in that position,” she says.

She remembers laughing off the shutdown at the time, reaching out to another of her theater friends and her Dear Evan Hansen successor, Gabrielle Carrubba, to hang out during their newfound free time. Like many others, Bechtel thought she would be back to the theater in three weeks.

In quarantine, Bechtel spent time with her family at home in Texas, playing Catan and Codenames, as well as doing a lot of reading. Many Broadway stars have flocked to TikTok and Instagram to keep up their presence in the now-virtual world of theater, but Bechtel has never been a fan of social media.

“I’m always just much happier when I don’t participate in it. So once quarantine happened, I was like ‘I’m just going to remove myself,” she says.

When Bechtel first joined the cast of Dear Evan Hansen, her producers encouraged a strong social media presence. Even after the high of gaining tens of thousands of Instagram followers, Bechtel still couldn’t get into it.

“I feel a bit weird about it.” she says. I’m not good at it, is the thing. I can see how other people post and interact. It does not come naturally to me.”

A few months into the pandemic, Bechtel felt an urge she had not felt in a long time: to go to school. Her Broadway career rendered college unnecessary as she consistently booked new roles. After some soul searching in quarantine, however, she decided to start looking into college applications.

“I was kind of nervous to tell my mom because it feels a bit like you’re giving up on theater by going to school,” she says.

But Bechtel’s mother was thrilled, and she was the one who found the School of General Studies. Going to a school in New York and studying in a flexible program ticked all of Bechtel’s boxes, as it allows her to return to the stage as soon as theater is up and running again.

Growing up, Bechtel enjoyed school but says she was shy and always nervous to speak in class despite her confidence when singing and acting. A year of living independently in New York and working on Broadway definitely gave her a confidence boost, but she still feels the same way about academic environments.

“I would consider myself an outgoing person, but the classroom … something about it! What I’ve discovered with my time at GS is it depends on the class and depends on the material and the vibe. So, in University Writing, I talked all the time,” she says.

Bechtel, who is planning on majoring in English, has been recognized by some fellow Columbia students. Some have privately messaged her mid-lecture―an interaction which has become a small, yet unexpected aspect of Bechtel’s Columbia experience.

While Bechtel is mostly known for starring in Dear Evan Hansen, film and TV buffs may recognize her from the small silver screens as well. Bechtel has guest starred in Law and Order: SVU and FBI: Most Wanted, and her first ever screen acting gig was in Ari Aster’s debut A24 film Hereditary.

When Bechtel first started auditioning for films and TV shows as a tween, she hated it. She was not used to watching herself back on video, and it was a world apart from musical theater.

“I don’t even remember this and I’m appalled at this story,” she tells me. “But apparently, I told my mom—I must have been like 13—that I didn’t want to do the film and TV auditions anymore. … [My manager] stopped sending me stuff for like a year or six months. … I’m like, I can’t believe that … how, how dare I?”

Bechtel admits that it is still hard to watch scenes of herself at times, but she believes that doing self-tapes for film and TV from a young age helped advance her theater career. She was only a rising high-school senior when she was cast in Hereditary as Bridget, a classmate and the love interest of Peter, played by Alex Wolff.

“The whole time in my brain, I was like, ‘I can’t believe I’m here. I’m trying my best. The Naked Brothers Band is inches away from me,’” she says. “I was just starstruck the whole time, but it was definitely very cool to get to see that world [of film].”

The three days while Bechtel was on set were the first few days of shooting the feature altogether, so there was a lot of nervous energy. The film had not yet been picked up by A24, so Bechtel truly had no idea of the film’s ultimate success, even when she found out it would be released in theaters.

While she has grown to love screen acting, she still feels new to the scene. Musical theater is her first love, and she is dying to go back to her roots when stages reopen.

“Now that I’ve been doing [college] for a while now, I’m really, really wanting to do theater. I always say I want to do whatever I’m not doing, which is maybe not a great personality trait,” she says. “Let me tell you, my first semester of Columbia I loved so much, and now I’m really just itching to get back out there.”

Bechtel is busy auditioning through self-tapes and Zoom callbacks as the arts makes its slow return. She eagerly awaits Broadway’s reopening.

“What’s weird about it is that even when [theater] does come back, there’s no guarantee I’ll be in anything for a while so I really just want to get out there … get my toes in the water and hope something comes out of it,” she says. “I will be diving in head first whenever I can.”

Arts and Entertainment staff writer Jane Loughman can be contacted at jane.loughman@columbiaspectator.com. Follow her on Twitter @queenofquirk.