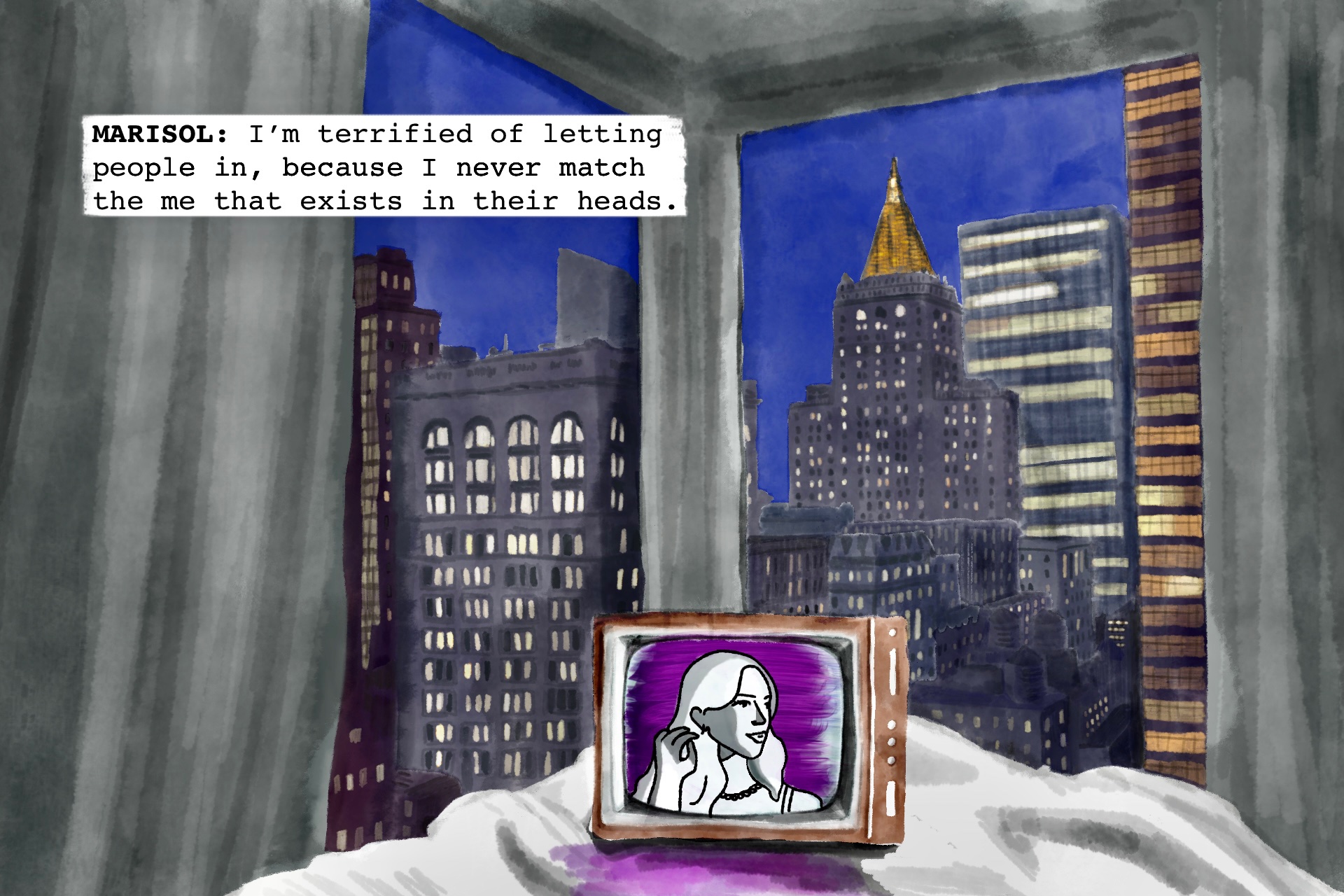 Her name is Marisol. She is 29, on the cusp of turning 30. She has a  picture-perfect life with an annoyingly hot fiancé—à la Fleabag’s “Arsehole Guy”—and a fabulous New York City apartment straight out of a HBO series. Yes, she graduated from Harvard Law, is a regular at Equinox, and radiates “it-girl” energy. She is so perfect that it is slightly irritating—almost too good to be true.

She also exists entirely in my head or, rather, in the TV script I’m writing. I like to think she came out of the many quarter-life crises I have had during the pandemic. Starting my 20s has caused me to stress eat ice cream and think through 20,000 theories about where I will be in five to 10 years. Maybe that is why Marisol is turning 30 and is absolutely terrified about it. The older I get, the more scared I feel about the decisions I make.  Time turns what-ifs into what happened. “Mari,” as her friends call her, was born out of the many what-ifs I had while comparing where I was in my life and where I thought I should be.

MARISOL: So yeah, I’m not jumping for joy at getting older. My life is basically over, and it feels like I never truly even started it.

Among the 20,000 theories consuming my thoughts during the pandemic, the ones about the future were easily the worst. I was left wondering whether my major would dictate my happiness or my success, and what would happen if I hated the path I end up on. The list of questions I asked myself, the universe, and whomever was listening were endless.

What if I majored in film and media studies and studied screenwriting? What if I tried my hand at acting and studied Strasberg or Meisner? What if I applied to the Yale Drama School? What if I flop and fail? What if my parents are disappointed in me? On the opposite end of the spectrum: What if I went to law school and lived in New York? What if I led a successful practice, or became a partner at a firm? What if I am satisfied, rich, and successful?

MARISOL: Chill, change things up, reinvent myself. A fresh start.

I settled on a happy medium, and Marisol came to be. I had never written a script, but I figured it wouldn’t hurt to try. I found it to be a formidable challenge, a different way to imagine the stories I made up as a young girl and ultimately let die in the margins of my tattered notebooks. I have always loved film and television and the escapism they bring. With a script, I could be in control of the vision and have it come to life. The focus on dialogue, scene composition, and character-building made it difficult for me to abandon this new world I had created. I am not the first person to leave a movie theater or finish a show feeling like a different person, but I wanted to be able to give myself that feeling. Plus, I had a free Masterclass subscription giving me premium access to legendary writers like Aaron Sorkin and Shonda Rhimes. This was far cheaper than therapy, and I did not have to dump my emotions on my friends. These what-ifs would cease to be possibilities floating around in my mind. They could become tangible steps towards a new path.

So I wrote. Marisol’s life became a surrogate for the one I pictured for myself. For the longest time, she was merely an asterisk waiting to be named. All I knew was that she was mine. I had the power to create an entire world and predict the future. Living out my “main character syndrome,” I wrote her story, borrowing from my own, but enhancing it. I jotted down bits of dialogue in the Notes app of my phone, tucked away for my eyes alone. During fall 2020 course registration, I enrolled in “Introduction to Film & Media Studies,” to take what I learned about film and use it to visualize the universe Marisol existed in. I then curated a Spotify playlist capturing all the emotions I felt during the writing process—Lorde’s “Liability,” SZA’s “20 Something,” Clairo’s “Sinking.” Spring came, and I joined Columbia Undergraduate Film Productions’'s Screenwriting Workshop.

Taking a story and a world that were mine and presenting it for critique to complete strangers felt like a huge step. It was more than a sharing session to get feedback on how to improve my script. I would compare it to letting people read a diary or following a finsta, except I’m spilling my guts through the experiences of a fictional 20-something who’s not really me. I had to get comfortable with my peers, but I also had to get comfortable with myself, and I had to get comfortable with putting Marisol out there. The stakes are always raised when art is shared because the lines between personal and public blur, especially when the characters and story don’t feel particularly fictional. I spent hours planning out my treatment and writing the first few episodes. On Sundays, both of our stories were presented and discussed.

MARISOL: I’m terrified of letting people in, because I never match the me that exists in their head, and I’m stuck trying to reach something that I can never be, that I’m just not, and fuck—I’m probably oversharing.

Time passed, and Marisol’s universe grew from what was once a little blurb in my Notes app to a 30-page document living in my Google Drive. Every detail was meticulously noted, and nothing was too small to consider when crafting her life. If she really represented one potential path for my life, she had to have some of the things that I wanted most for myself.. Her kitchen is heavily inspired by Dakota Johnson’s dreamy green one from the Architectural Digest interview. Marisol’s apartment has huge, south-facing floor-to-ceiling windows that bathe her many plants in sunlight. She and her partner met in law school and her favorite ice cream flavor is Ben & Jerry’s “Half Baked.” The cute next-door neighbor would be played by Matthew Gray Gubler, no doubt. Even if I couldn’t have everything I wanted in my life, Marisol would have anything and everything, no matter how cliché or unrealistic it seemed.

As Marisol took big steps in her life—an engagement, promotions at work—I watched her grow like a parent witnessing their child’s coming of age. I initially tried protecting her by shielding her from life’s difficulties; her biggest problem in the pilot was originally a coffee stain on her blouse. I wanted her to not have to worry about the concerns that kept me in a perpetual state of stress. I hoped things would fall into place for me the way they did in Marisol’s picturesque life.

COLLEAGUE: You ARE her, living that aspirational life. Look at you! A girlboss and shit.

MARISOL: I’m actually a mess, but you can’t even tell. And, please, don’t ever call me a girlboss. They’re actually the worst.

Yet, the more time I spent with Marisol, the more I realized that things weren’t actually all that great for her. I used her to escape from all the worries and suppressed fears that plagued me during the pandemic. She didn’t have imposter syndrome or struggle with people-pleasing, and in a naïve way, I believed that these issues couldn’t really be that bad for me if they didn’t exist for her. After a while, however, I started to wonder why her life felt so stagnant. She had everything, yet was empty. There was so much more waiting to materialize, another dimension of feeling and reality that I had neglected to give her because I was afraid of giving it to myself.  I think my subconscious knew I couldn’t hide behind Marisol forever.

FIANCÉ: We’ve been together for too long for you to keep holding things back. Sometimes you feel so far away, and I don’t know how to get to you.

MARISOL: I’m right here. I just don’t want to talk about it. Let’s just enjoy right now, being together. That’s enough for me.

It took a long time for me to be honest with her and even longer to be honest with myself. So, I messed up her life. She has a nasty break up with her fiancé, quits her job, and has a public falling out with her best friend. I have not yet written these scenes, but I know they need to happen. To bring Marisol to that point, I have to ask myself what I want out of life. Sometimes I wonder if I really chose to bring her to her rock bottom, or if that is where she needs to go for me to realize that her life is perhaps not what I want at all.

As I continue to write my script and delve more into her life, I think about how far Marisol and I have come. I can now live happily despite not knowing what my future holds. I’m still working on myself and enjoying the process of figuring out how to live on my own terms. Marisol comes to a similar conclusion during the finale of the first season, as she realizes that she has spent her entire life doing what was expected of her, both by others and by herself..

When Marisol drops a huge bombshell during a dramatic monologue at a party in one of the series’ final scenes, it might seem as if her outspokenness is out of character. For Marisol, the discovery of who she truly is and ultimately aspires to be is a radically liberating revelation for her and her alone. A few lines of Marisol’s monologue came to me while I was laying in bed, trying and failing to fall asleep.

MARISOL: There has to be something better than this, right? I have to try to live my life differently. What I thought I wanted isn’t fulfilling me, and I’m tired. Exhausted. I’m finally understanding what it is I want. Something so simple and yet so liberating. Maybe you can never know everything about a person, but you can at least try to know yourself. That’s what I’m going to do, and, for the first time, I’m doing something for myself.

My name is Briani. I’m 19, on the cusp of turning 20. By no means am I perfect, nor is my life or Marisol’s. I’m working on finishing her storyline, and if she can discover herself on her own terms, I don’t think it would be out of character for me to do the same.