In Pursuit of New Beginnings

In Pursuit of New Beginnings 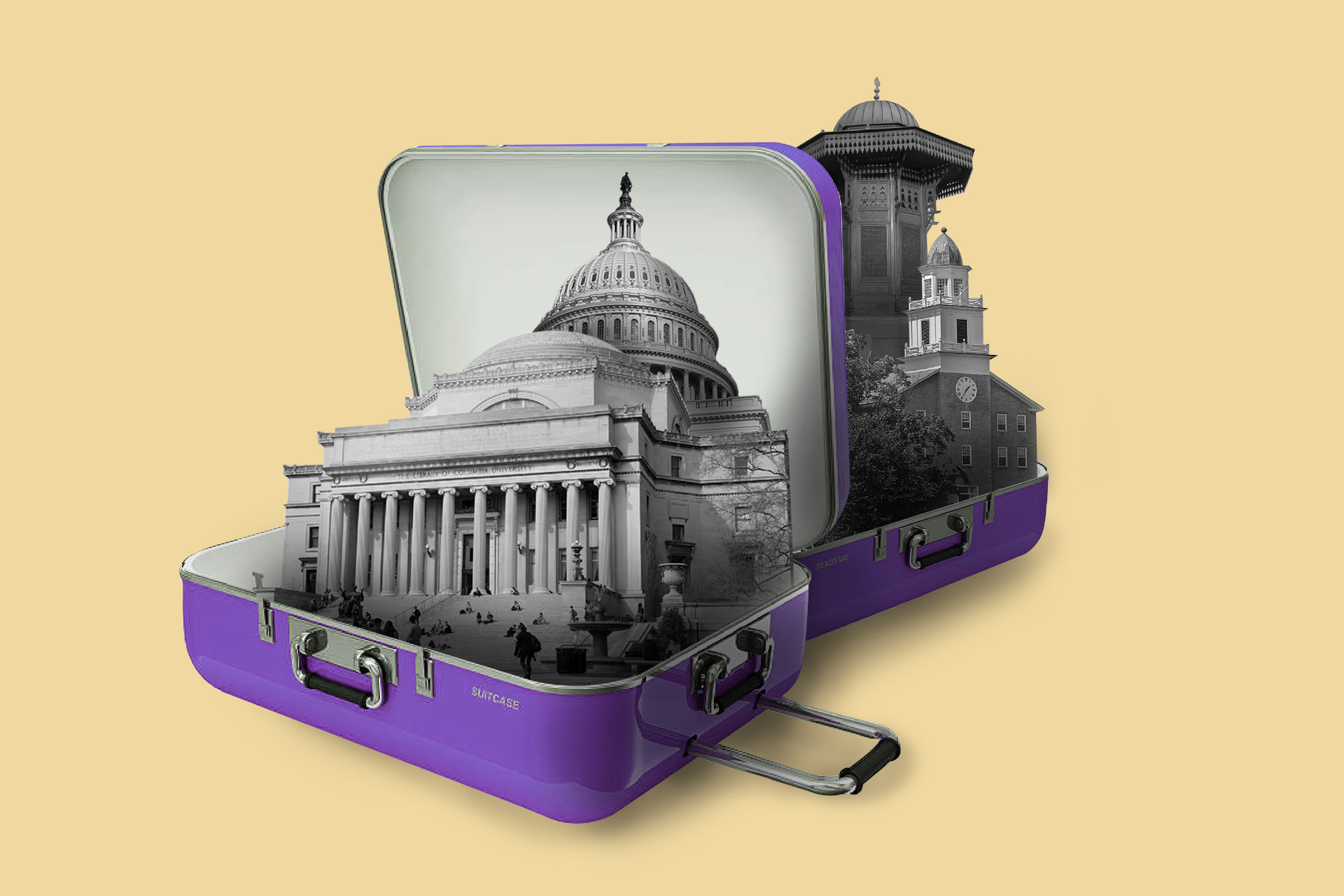 I used to be obsessed with the idea of starting over. I spent a majority of my school years in the same Maryland public education system, and I romanticized moving away as an attempt to remedy the feelings of loneliness that permeated my youth. By my junior year of high school, I was determined to graduate early and start over somewhere else—this time on my terms.

Applications to the United States Department of State’s fully funded exchange programs dominated my junior year. While most of my peers focused on making college lists and preparing for the SAT, I worked relentlessly on writing essays for various scholarships. I yearned to leave my problems behind, and the idea of waiting another year until college was terrifying. I was obsessive, but I saw these applications as my most certain ticket out of my troubled teenage years, and I was banking on receiving one of them. When I was accepted into an exchange program in Bosnia-Herzegovina, I knew virtually nothing about the country aside from the war that had taken place there more than 20 years prior. What I did know, however, was that I would go.

For the week leading up to my departure, I sat on the floor of my childhood bedroom surrounded by the contents of my closet and two purple suitcases. I packed and unpacked the two suitcases, cycling through manic phases in which I attempted to fit all my favorite books and painting materials into one suitcase before realizing that my bags were well over the 20-kilogram limit for checked baggage. I brainstormed how to get my guitar across the Atlantic without breaking it, despite the impracticality of bringing a guitar to Bosnia. I eventually gave up and threw in an odd variety of clothing—a few sweaters, my best pair of jeans, a couple pairs of atrociously ugly (but comfortable) sneakers. It seemed impossible to so casually fit one’s entire life into the confines of two suitcases.

The year I spent in Bosnia was as formative as it was exhausting. I remember feeling like my mind could never take a break—from studying Serbo-Croatian in an attempt to better articulate to my host-mom why I failed my econ exam to trying to form friendships with my peers in the short 10 months in which I was in school. It took me about eight months to reach a language level where I was comfortable expressing myself in most social situations. By April, not only could I tell my host mom that I failed my econ exam, but I could also understand when she explained the concepts to me and helped me write my term paper. Things were finally coming together.

Just as everything began to fall in place for me academically and socially, my program came to an end. I flew back home to my Maryland suburb, where I spent the next three months desperately and unsuccessfully dealing with the seemingly artificial notion of reverse culture shock. I remember feeling disoriented almost everywhere I went. Basic interactions in grocery stores or cafés gave me headaches as my thoughts blurred between English and Serbo-Croatian. I also attempted to divide my social life into catching up with high school friends, who experienced an entire senior year without me, and navigating the time difference between me and my friends who still hadn’t finished classes in Sarajevo. The whole experience made me feel immaterial and liminal, like an impostor who didn’t belong in either world.

My summer passed in a blur, while thoughts of starting college occupied my mind. As I unpacked my bags from Bosnia, I began to repack them with clothes and personal items that were more suited to the cold landscape of Vermont. When I arrived on the campus of Middlebury College in fall 2018, again off a plane with two suitcases in tow, I knew that it wasn’t the place for me. I don’t know that I ever had a reason for feeling out of place there; just a year prior, Middlebury had been my dream school, and it was a place I imagined as a picturesque ideal of vibrant higher education and an intimate college experience. The reality was much more bleak, and again I struggled with feelings of isolation and loneliness that were compounded by 3 p.m. sunsets in the winter. Thoughts of transferring dominated my entire fall semester and winter break, and I worked endlessly on applying to college for a second time. Once again, I viewed transfer applications as a way to start over somewhere better, and I obsessed over every detail of my applications, viewing transferring as the only way to remedy my unhappiness. I think that my resolute determination to leave Middlebury prevented me from ever really assimilating—especially since starting over is exhausting.

I received an email a few weeks after getting into Columbia as a transfer student with the subject line “Welcome to College (Again)!” It felt like a cruel joke, a reminder that my inability to do college right the first time necessitated another discursive attempt at starting over for the third time in three years. While I did dread the process of reintegrating into college as a transfer, I realized that transferring was a new opportunity to cultivate myself into exactly who I wanted to be—the person I failed to be at Middlebury—and I was determined to make friends, join clubs, and settle down. By the time I actually got to Columbia, I was drained. Most people probably come to a college with the understanding that it’s where they’ll spend the next four years of their lives, and despite missing out on a freshman Columbia experience, but I was content knowing that I would have three years in the same place. Although I felt drained, I was excited to leave behind the snowy landscapes of Vermont for the urban austerity of the city, and I knew that Columbia was a place where I could thrive.

Unfortunately, like everyone in the world, COVID-19 completely derailed my plans. I felt an eerie similarity to how I’d felt the past two years—like everything was coming to an end just when I was starting to get comfortable in my day-to-day life. I said goodbye to suitemates and close friends who I now haven’t seen in over a year and once again haphazardly threw all my belongings into the same two purple suitcases.

Over the summer, I made plans to move back to the city with a friend and a bunch of friends-of-friends. I signed a lease in early August and, soon after, moved into a small apartment with four other people whom I barely knew—most of my friendships were pretty surface level due to the nature of having my first year cut short. The first night I spent in my new apartment was one of my loneliest of the past three years, despite a summer filled with social distancing and sporadic Zoom calls with friends. I was back in New York, only a few blocks from Columbia’s campus, and yet I still felt like I was about to start over for the fourth time in four years. I knew it wasn’t exactly the same as before—at the very least, I had a few friends in the city and was somewhat familiar with Columbia’s social and academic scenes. But fall 2020 felt like just another iteration of new beginnings—I lost contact with most of the people who dominated my sophomore year experience, either by nature of Zoom fatigue or the realization that we wouldn’t be seeing each other again anytime soon.

The uncertain nature of the pandemic has been part of a much longer continuity of abrupt transitions in my life. The process of starting over in a new place and watching everything come crashing to an end is discouraging. I’ve often felt hopeless, like maybe I’m incapable of ever really fitting in anywhere and instead am destined to forever stay in this transitional reality between one life and the next. I think that at a certain point, change became easier for me than stability. When situations become difficult, it’s so simple to leave my problems behind and start over somewhere new, and eventually the feelings of liminality became a self-perpetuating cycle. For me, the disruptions in my life brought on by the pandemic were yet another new opportunity to start over. In my previous attempts at new beginnings, I enjoyed the feeling of agency associated with choosing to restart somewhere new. This time, my lack of choice made me realize that romanticized notions of new beginnings were a means by which I tried to run from my problems. Starting over isn’t necessarily a key to happiness or completeness.

I like to think that the past few years of change have made me a better person in some ways—more adaptable, more comfortable meeting new people. As I prepare for my senior year of college, I wonder what next year will look like and how the pandemic has affected the continuity of everyone’s lives. A return to campus will mean the rekindling of all the lost relationships that were affected by COVID-19, but it will still be a new beginning for many students whose social and academic lives have been unequivocally altered by the space and distance imposed upon us this year. I will enter the fall 2021 semester with more continuity than I had possessed before the pandemic, I will live with one of my current roommates, and for reasons I can’t exactly explain, I finally feel like I will continue the trajectory of my life rather than begin a new one.