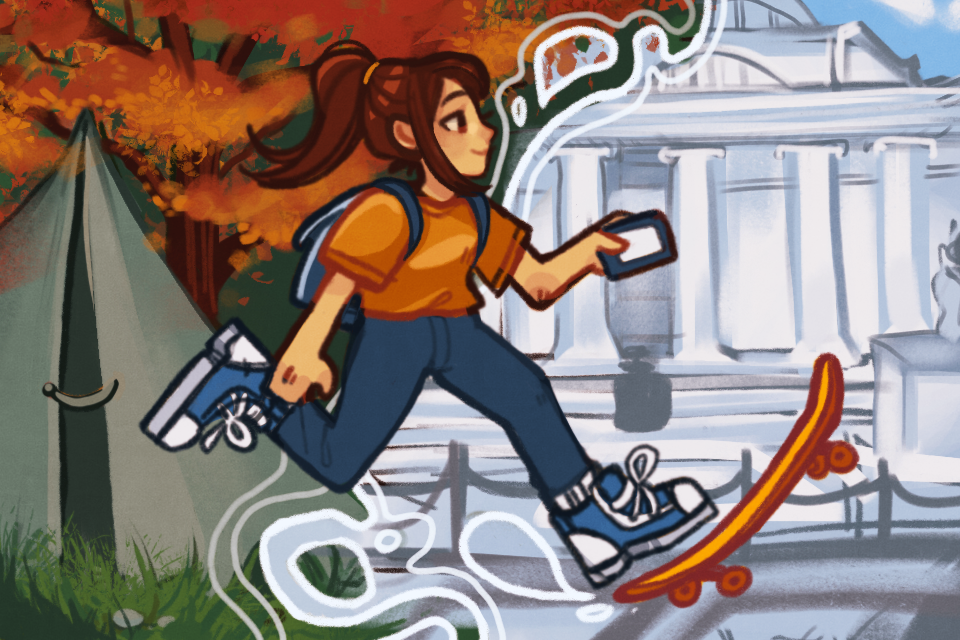 I pulled up to the corner of the lake in my mom’s beat-up SUV, which had been filled to its limits with sleeping bags, tents, beer, and my friends pushed up against one another. They had all been complaining about my driving for the last two hours. The bright, almost dripping colors of the Adirondacks’ fall foliage bent themselves into my car’s windows as I pulled her through the final stretches of road to our campsite, hidden just north of Saranac Lake.

This was not how I imagined my fall semester of senior year, a time that high school me dreamed would be filled with skyscrapers and a pretentious, coming-of-age narrative in the city. I never thought I’d go back to my hometown for more than a few weeks at a time. But just months before graduation, I was there with my high school friends on a forgotten lake, searching for firewood and listening to some haphazard folk-punk playlist. Still, things felt right for the first time in months.

I don’t want to write the all-too-familiar story being told over and over again today: that the pandemic was, and is, a difficult time for me and that I was really sad. Instead, in my final piece for The Eye—a publication I found my first year when I was floundering for a place in this intimidating college and where I ended up finding a lovely group of funny and genuinely good people—I want to remember the things that taught me how to love and how to feel love amid my crumbling final year of college.

I defined so much of who I was throughout my life by my goal of escaping my small town. I was different and wanted to live in the big city—it’s not a phase, Mom. When I flew back home from my abbreviated study abroad experience last spring, I thought I was going to have to figure out how to survive a couple of weeks in my isolated hometown again. Ten months later, I was still in my childhood bedroom taking Zoom classes and relying on my younger sister for almost all of my social interaction. (Kiera is admittedly much cooler than I was when I was in high school, or can ever hope to be.)

At Saranac Lake, about 70 miles from where I grew up, my friends and I have claimed one campsite as our own, going back time and time again throughout the summer and into early winter until the night frost finally convinced us that the season has ended. This specific afternoon was the first of several trips to the site I would make with my friends throughout 2020. It is big enough that I could pull my car all the way in and pray she would be able to pull herself out of the sand the next morning. We took all of our stuff out of the trunk and set up the tiniest tent the world has ever seen. I had also insisted on bringing a hammock, which I made my friends set up for me. I, annoyingly, spent the first 20 minutes just taking photos of them and pointing at trees saying, “Wow!”

These are boys I hadn’t spent more than an evening with since I was 17, and now here I was asking—forcing—them to trek out into the middle of the mountains and spend hours in the woods with me as often as possible. I am so beyond grateful for them. It is a gratitude that I could never express fully to their faces and something that we don’t say to one another enough, but still, looking around at that campsite, I knew. They held my emotional hand through the hardest year of my life. I have spent hours with them since May when I harassed them into teaching me how to skateboard, and then they accompanied me on a months-long endeavor where I tried to learn how to kickflip. (I am so close to landing it finally. Don’t worry!) They were the people who I told first about my canceled fall semester, about a severe illness in my family, about the small day-to-day things I so needed to share during a period when it felt like the outside world was an unreachable void.

I don’t get cell service in the Adirondacks, and when I’m there anything could be happening. This isolation is not the silence or hollow self-discovery of Walden, a book that irritates me to no end; it is a sense of community with kids around whom I am not performing normalcy or contentedness. We just are. I forced them to swim in the lake at midnight. It was freezing and I couldn’t feel my feet as I splashed through the silt in that tiny mountain pond, the firelight of nearby campsites flickering through the trees across the lake. It was a reminder that we were not alone but far too distant to feel intruded upon. I looked up and yelled; the stars were so bright there, and I thought about how you can’t see this in the city. My friends called me an idiot and told me to get out of the water. They were holding s’mores for me. As I dragged myself out of the lake, jumping around like a fool to regain feeling in my body, I was so happy and the world was meant just for us.

I grew up thinking this kind of community was just something I would always feel. My town has only 1,600 people, and my family is very small. I grew up going to my mother’s parents’ home every weekend, and they seemed like an inseparable extension of my home life. My father grew up bouncing between my hometown and the Akwesasne Reservation, a Mohawk boy in a rural white town whose livelihood relied on his and his siblings’ interdependence. In the yearly Haudenosaunee Thanksgiving Address, we are taught to thank those around us as well as the very environment we are gathered in. After these expressions of gratitude, we repeat, “Now our minds are one.”

This kind of bond with ourselves, with each other, with the ground we stand upon and the sky we look up at, feels so necessary now. The pandemic has forced a reshaping of the way I believe I exist in the world, of the time and devotion I owe others. Throughout the pandemic, I longed to be in the forest so often for a reason, feeling as though escaping to the woods would allow me to feel some sense of wholeness again. It feels like coming home to something that I can’t find in the city and costs nothing more than a few gallons of gas and s’mores supplies.

I woke up early in the morning and unzipped the corner of my tent to the smell of campfire and warm August air. My friends were milling about the edges of the lake and the fire, picking up all that we came with so we could make the journey home. I sleep best in the woods, partially because I’m always exhausted but also because of the quiet and shared atmosphere of camping. I stretched and ran over the to-do list for the day as I got ready to reenter reality, even though it had only been a 24-hour break from it. The future was daunting, my legs were covered in skateboarding bruises, and my anxiety was at an all-time high. I asked my friends if they wanted to get ice cream on the way home.

Now, months later, I lay out on Butler lawns and in Central Park and any other green space I can scrounge up in the city. My friends and I share John Jay meals six feet apart and I sprawl in the grass for hours. It’s not a small mountain lake in the woods, but the sun feels the same here, even after months of darkness. The friends and conversations are different, though not lesser than, and the playlists now have more hyperpop than folk punk. But I’m still skateboarding, just now in Riverside Park, and experiencing the same moments of small world, big feelings when I look at my friends and realize how much I love them.

The gratitude of these moments is all-encompassing and makes post-graduation life seem a little less terrifying. What a terrible time to be a senior in college and what lovely people I have to share it with. I’m keeping that in mind as I put on Pantone 290 this month and experience my series of “lasts” at this school. At the risk of sounding trite, these people are the best thing I’m bringing with me beyond the temporal borders of my undergrad degree. With vaccines rolling out more and more every day, I can hope there is a time soon when I can return to Mountain Pond with both my hometown friends and the friends I swipe into John Jay every day. I’m even making a playlist for the occasion. Until then, I’ll keep finding pockets of sunlight in the city and sharing them with the people I love.