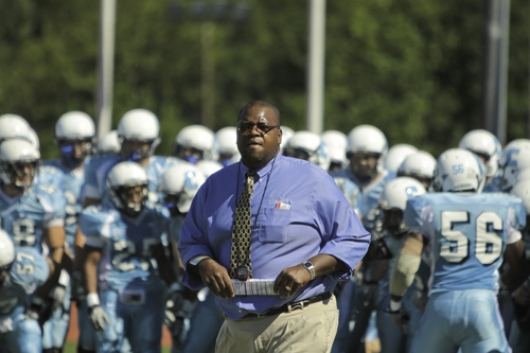 The athletic department has confirmed that Columbia has released head football coach Norries Wilson with immediate effect. The news comes after the conclusion of the 2011 season, which saw the program go 1-9 overall, and 1-6 in the Ivy League. The lone win came in yesterday's season finale against Brown. See after the jump for the entire press release from the AD.more COLUMBIA ANNOUNCES LEADERSHIP CHANGE FOR FOOTBALL PROGRAM Head Coach Norries Wilson Will Not Be Retained NEW YORK  – Dr. M. Dianne Murphy, Director of Intercollegiate Athletics and Physical Education at Columbia University, announced today that head football coach Norries Wilson has been relieved of his responsibilities, effective immediately. "We are appreciative of the effort and hard work that Coach Wilson has contributed to the Columbia University football program over the past six years," said Murphy. "Norries has dedicated himself tremendously to the University and our football players. Norries is a great leader of men.  He did so much for the young men on our football team.  His leadership is second to none." "Norries has accomplished a great deal in helping us rebuild a stronger foundation for Columbia Football.  We thank him for his tremendous service and wish him the very best in the future. " Arriving on Morningside Heights in December 2005, Wilson led Columbia to a 5-5 record in the 2006 football season, the winningest season of any first-year coach in school history since the start of Ivy League play in 1956. In 2009, Wilson's fourth season at Columbia, the Lions finished tied for fourth place in The Ivy League, their best finish since 2001. He is the only head football coach in school history to lead Columbia to victories over Princeton in consecutive seasons. Overall at Columbia, Wilson finishes with a won-loss record of 17-43, with an Ivy League record of 10-32. Added Murphy, "Making a decision of this nature is always difficult. That said, in order to achieve the goals that we have set for the Columbia football program, we believe that it is necessary and appropriate to make a change in leadership at this time." Columbia will launch a national search for a new head football coach immediately.