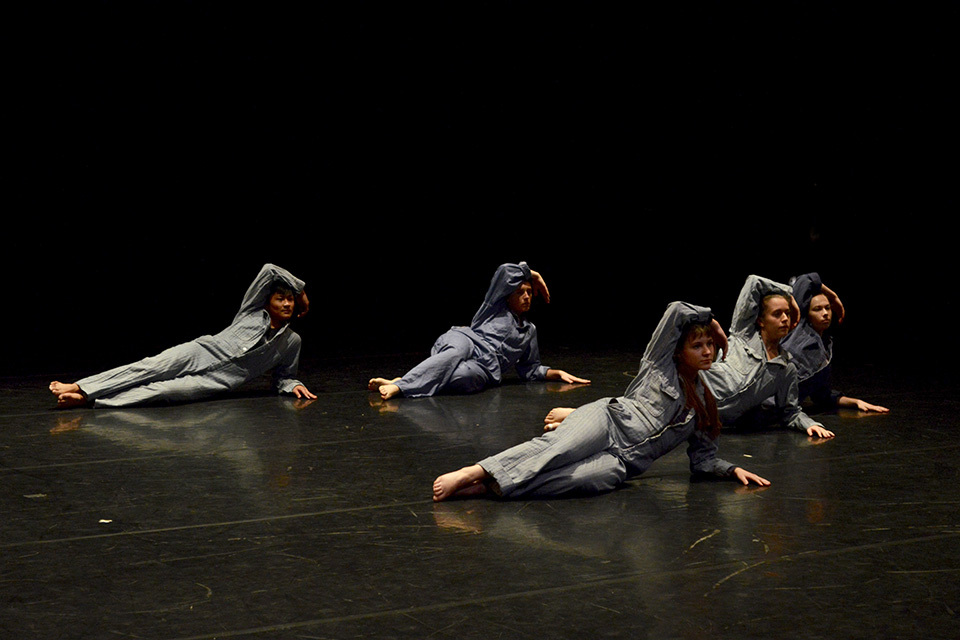 Forty Columbia and Barnard students will perform at New York Live Arts this Thursday through Saturday.

The 12th season of "Barnard/Columbia Dances at NYLA," a concert produced by the Barnard Department of Dance, will take place this Thursday through Saturday at New York Live Arts in Chelsea.

Forty Columbia and Barnard students, selected during auditions at the beginning of the semester, will perform the world premieres of three pieces by Joanna Kotze, David Thomson, and Jennifer Archibald. The concert will also feature the first restaging with American college students of "Fantasie," a work by the famed Berlin-based choreographer Sasha Waltz.

During a rehearsal at NYLA, choreographer Joanna Kotze gazed up at her dancers from the front row of the empty theater and said with a smile, "It's gonna happen, everybody. It's happening." After rehearsing for six hours a week since September, the anticipated performances were finally imminent.

Kotze's creative process began with the dancers in the studio in order to avoid preconceived choreographic plans. "I [didn't] go into class ... with a dance already made. I walked into the room with them and started the process with them," Kotze said of her method of creating choreography. "It's been a long process together this semester."

The rehearsal space, located in the studios of Barnard Hall, is where three of the four pieces featured in the concert were created. The one exception, "Fantasie," originally premiered in 2006 at the Opéra de Lyon in Lyon, France.

"There was definitely some pressure in knowing that we are trusted with being the first college students to perform 'Fantasie,'" dancer Kosta Karakashyan, CC '19, said. "But it came with the rush of learning a new way to move."

"Fantasie" requires a heightened awareness among dancers of the performers around them. During the dress rehearsal, the dancers often moved subtly in unison, shifting their body weight until they leaned on the dancer adjacent to them. As each made contact with the next, the conglomeration of bodies melted in the direction the dancers are leaning toward.

Kévin Quinaou, who performed in the 2006 world premiere of the piece, was tasked with restaging it for the NYLA concert. "It's been incredible," he said. "If Sasha could be here tonight, I'm sure she would be extraordinarily happy about the work that's been made."

Kotze's piece, "Right Now," is a fascinating montage of movements. In rehearsal, one dancer twisted from side to side like a washing machine, one scurried across the marley, and another seemed to do a modified rendition of the hand jive. Meanwhile, two more resembled a frantic air traffic controller and a cardio workout enthusiast, aggressively punching the air during a series of calisthenics. They worked like cogs in a machine—repeating individual tasks to manufacture an integrated whole.

At times, the machine disassembled, and one dancer took the stage as the rest, frozen, looked on. Or, the machine reconstructed itself entirely—the performers rushed up the staircase and out of the theater then re-emerged downstage, fabricating a new movement machine.

The unconventional extension of the stage into the audience reflects the emphasis Kotze put on frame and design, an outgrowth from her degree in architecture.

"I know this theater very well," Kotze said. "Space is a huge part of the practice I work with the dancers on."

While dancers in “Right Now” will perform Kotze’s choreography that has developed over the past three months, David Thomson’s “Tone” features a bold amount of dancer improvisation—an opportunity that Thomson said dancers don’t normally get. Because of this, each performance will be different.

"This piece is kind of like gambling," Thomson said. "The process of making this piece became a lovely opportunity to work on the idea of how people engage and how performers become truthful in making movement, cutting and splicing from their bodies' natural motion."

The final piece of the program is "Shades," by Jennifer Archibald, the founder and artistic director of the New York City based Arch Dance Company. The piece, which fuses ballet and funk, also incorporates soundbites from rap artists like Tupac and Kanye West and political activists like Angela Davis.

"This piece is about revealing the hip-hop aesthetic as a story," Archibald said.

The choreography featured a dynamic use of levels—from lifts to floor work—and juxtaposition of steps from different movement vocabularies, such as grand battements and body rolls.

Such bold amalgamations, like "Shades," are a unique product of the collaboration between the best of the University's dance department and four renowned choreographers who have been artists-in-residence at Barnard throughout the semester. When the efforts of these dancers and choreographers are brought to the stage for the first time this week, the result will be revolutionary.

"Over the course of the semester, I've seen some amazing things that they've created and built," Thomson said. "It's been a great ride."