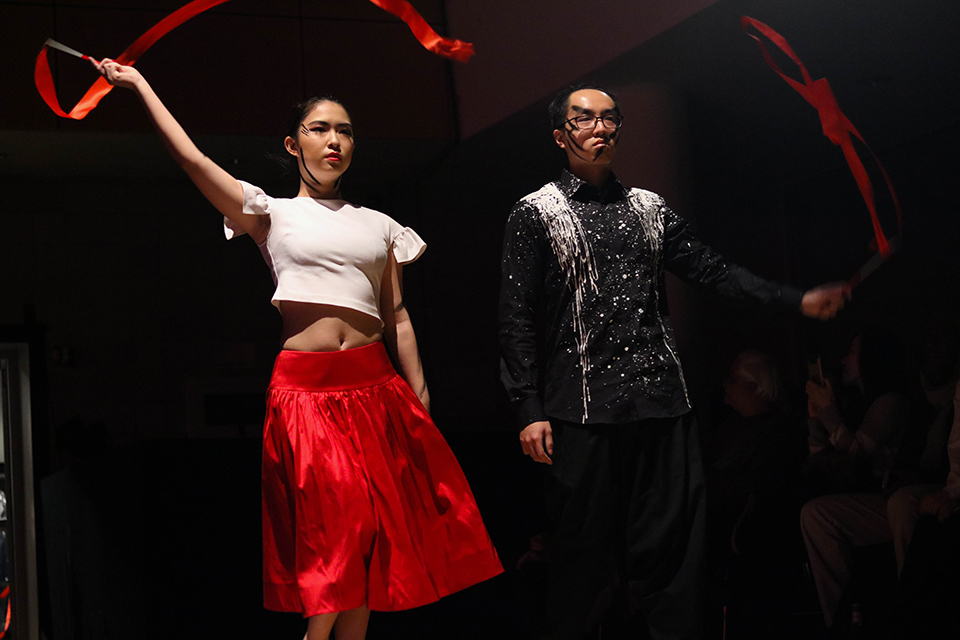 Models perform at the 2017 Lunar Gala, of which the theme was "Harmony."

What effect has the United States’ current political climate had on fashion? Following recent shifts in the national mood, much of the atmosphere on campus—in reflection of the entire country—has been in a constant flux of uncertainty. The Chinese Student Club’s 38th annual Lunar Gala Fashion Show addressed this issue with the theme “Harmony,” in an attempt to convey solidarity amidst political chaos in the Columbia community.

“In Chinese traditional culture, harmony is a gentle force, evoking peaceful coexistence. Harmony is a constant state, beckoning us to embrace individual differences and find acceptance within ourselves and of each other,” the fashion show’s online program stated.

The subtlety with which directors Kosta M. Karakashyan, CC ’19, Mehmet Sonmez, SEAS ’19, and Richard Zhang, SEAS ’19, carried out the performance was impressive. While there were no overt political statements expressed in show’s pieces, there was a narration of individual journey from chaos to peace. The effect was a series of “mood pieces” stitched together—an arresting array of visual and tactile imagery that assaulted one's senses as they followed the story’s progression. 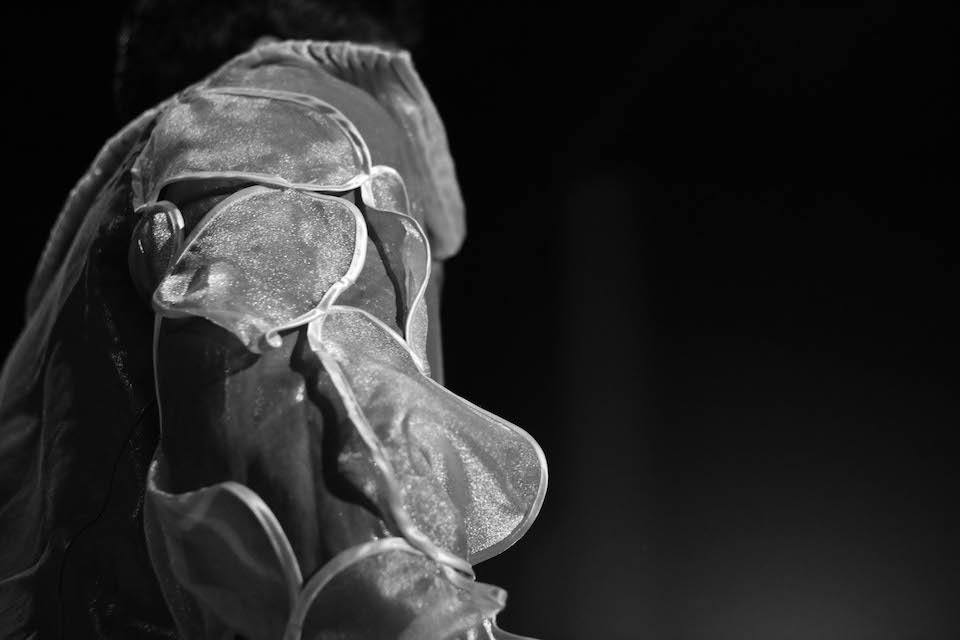 Featuring designers from Parsons, Pratt, and the Fashion Institute of Technology, this year’s collection encompassed an eclectic range of materials to showcase the varying mood pieces. The first scene was meant to convey China’s industrial period, as a scientist assembles his group of “perfect” robots. Instead, it had the strangeness and eeriness of another planet, complete with loose cuts of white silk that flowed from the models as if they were moving underwater.

The following collections were futuristic, if not dystopian, as the models’ heavy suits and long dresses evoked a sense of theatricality. Models wore glitter eye makeup (courtesy of Sam Choi, SEAS) that seemed to suggest degeneration rather than vitality, complete with Zorro-esque masks and glow-stick wires that made the models look as if they were hospital patients connected to IV drips. That is, until the wires lit up. 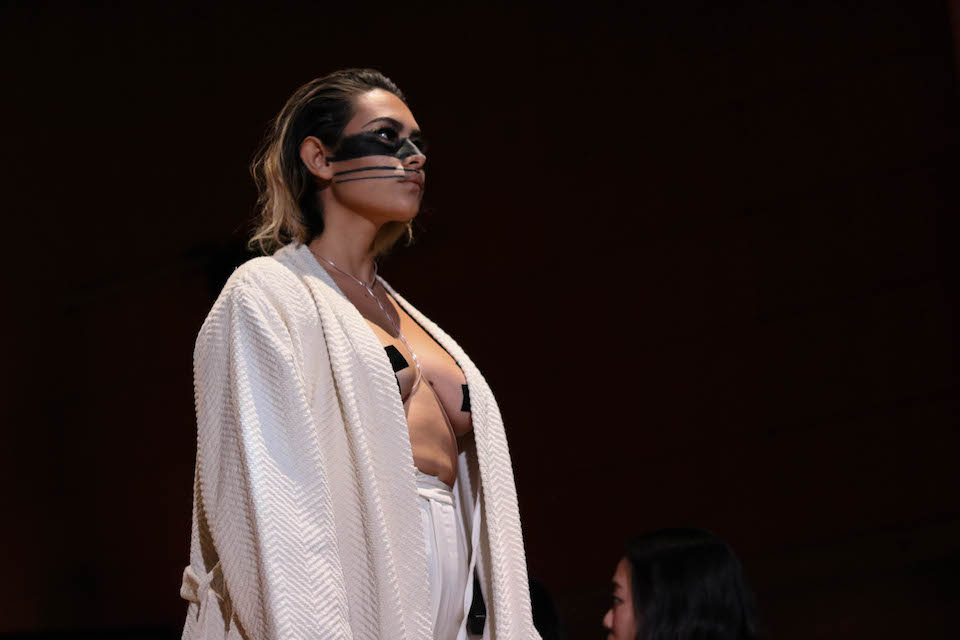 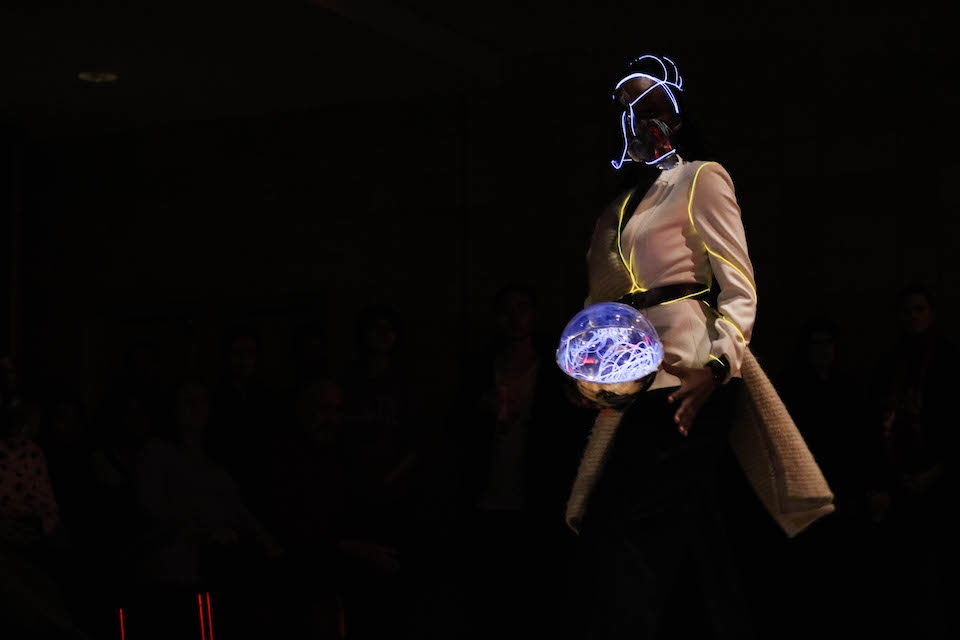 The sense of frenetic energy in the first two collections transitioned into the third scene, which itself seemed to depict a period of transition—one where the individual begins to find themself. Directed by Antonia Georgieva, CC ’20, it was perhaps the weakest part of the fashion show: Dancers were dressed in stage blacks, while models strained to convey emotions—initially of uncertainty and then of a strengthened resolve to belong in a community, which complicated the piece. It felt overly-theatrical and did not allow the featured collection of colorful pastels and deconstructed denim outfits to speak for itself. 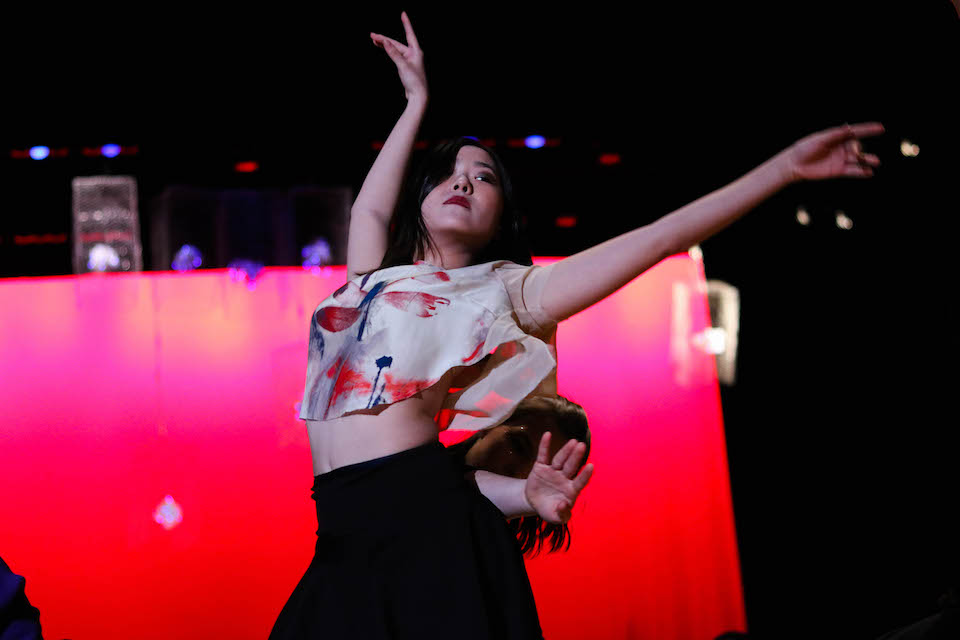 The strong finish to the end of this year’s show, however, made up for the previous scene. Directed by Theresa Yang, CC ’20, and Elshadai Tesfaye Biru, CC ’19, it hearkened back to traditional Chinese culture, with dancing ribbons, bold red taffeta skirts, and a lone spotlight that looked like a rising moon. Performers wore various avant-garde outfits as well, including clothes with black and white splatterings that reminded one of calligraphy ink being spilt across fabric.

The Lunar Gala ended quietly, with a lone violinist playing as the models froze on stage. After the stimulating and sensorially exhausting first half, the simple ending felt gratifying. Overall, this year’s fashion show succeeded in its aim of telling a story about a journey. Through its assaulting display of lights, music, movement, and, above all, costumes, the show compelled its audience to come along as it carved out the individual’s path toward harmony with oneself and with others.