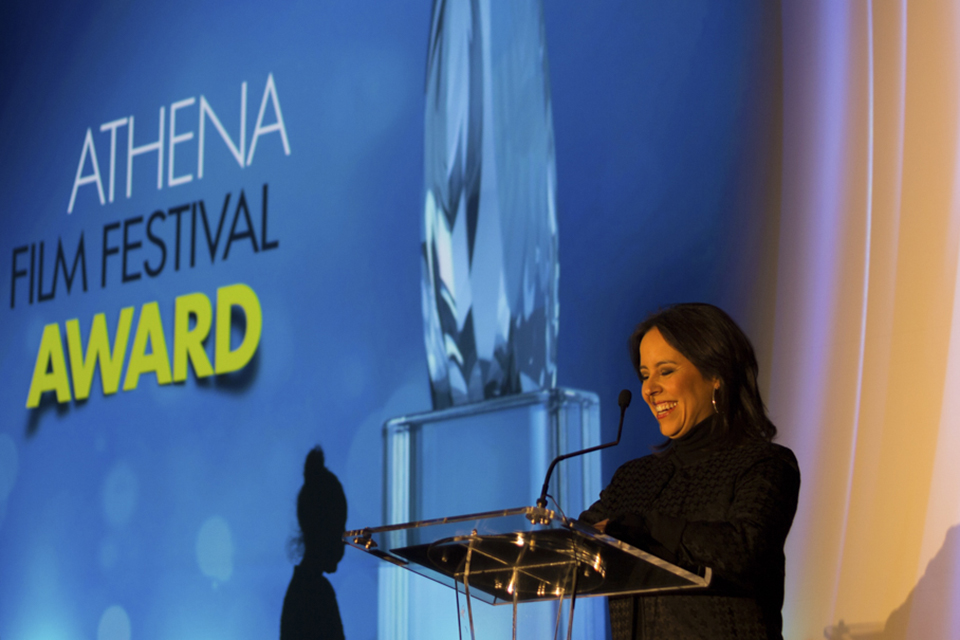 Director Patricia Riggen, an alumnus of Columbia's School of the Arts, accepted her Athena Award at the ceremony on Friday night.

The Diana Center played host to a red-carpet affair on Friday evening, as notable personalities from the film and activism worlds converged for a celebration of achievements.

The stars and champagne were only part of the event, which was the centerpiece ceremony of the Athena Film Festival. The four honorees—Eve Ensler, David Oyelowo, Patricia Riggen, and Regina K. Scully—as well as the equally well-known awards presenters, had been chosen for their efforts in elevating and inspiring women in film and the arts. The message was clear: These awardees embodied the spirit of the festival—a time and place for women to stand in solidarity with one another, celebrate diversity in the film industry, and engage in discourse to understand where progress still needs to be made in breaking the gender barrier in film and the arts.

Festival co-founders Melissa Silverstein, SoA ’93, and Kathryn Kolbert, director of Barnard’s Athena Center for Leadership Studies, expressed enthusiasm for the festival’s continued growth since its inception seven years ago. “The festival is better attended, more ambitious than we’ve ever been,” Kolbert said, also noting that more films were shown at this year’s festival than ever before.

Silverstein, founder of the women-centered activism site “Women and Hollywood,” highlighted the political urgency of supporting women in a traditionally male-dominated industry. “I expect people to try to think about what leadership means in our world today in a different way than they might have thought about it a month ago, as our world has shifted,” Silverstein said, referring to recent political developments in the United States.

Each awardee had a message for women in the film industry—and, more generally, in the arts—in light of a changing political climate that threatens to be hostile to minorities and female artists. “We’re seeing a predatory mindset take hold in every direction,” Ensler said of the situation.

The first award went to Oyelowo, who received the second-ever “Athena Leading Man Award” for his vocal support of women in the film industry and artistic professions. “I think anyone who has a voice and can use it for the betterment of others,” he said. “It behooves you to do so.”

Riggen, whose 2015 film “The 33” told the story of the 33 survivors of the San José mining disaster in Chile, garnered international attention for her treatment of what many perceived as a “masculine” subject. Her time at Columbia as a graduate student, she said, changed her life. Her growing reputation in the film world has also opened her eyes to the latent sexism in the industry.

“They need to recognize it so they can stop it,” she said of this problem among film-industry personnel. “We need to talk about it. They don’t do it on purpose; it’s just the culture that we are in on this planet.”

Scully, director of widely hailed documentaries such as “Miss Representation,” which Columbia included in its Sexual Respect Initiative list of films, served as a co-chair of the festival and also received an award on Friday. As a filmmaker whose subject matter deals primarily with social justice and women’s issues, Scully acknowledged the role that women must play in the combat for representation. “We are at the center of it all,” she said of women in the industry.

The final award went to Ensler, Tony Award-winning playwright, author of “The Vagina Monologues,” and founder of the worldwide “V-Day” movement, who qualified the current state of culture and politics in the United States as “in crisis.” Ensler emphasized, however, that activists and engaged women must not lose hope.

Each honoree was asked to describe in their acceptance speech a woman—other than their mothers—who inspired them, in keeping with the theme of women’s empowerment. Notably, Scully sang the praises of Gloria Steinem, world-renowned feminist activist and journalist, who later made an appearance at Sunday’s town hall on activism.

Oyelowo encapsulated the spirit of the evening in an animated speech about his awe of the female directors present, which earned him some laughs and resounding applause. “If you have a daughter, or have a mother, or had a mother, or a wife—someone who’s female who you love—this is your fight as well,” he concluded.