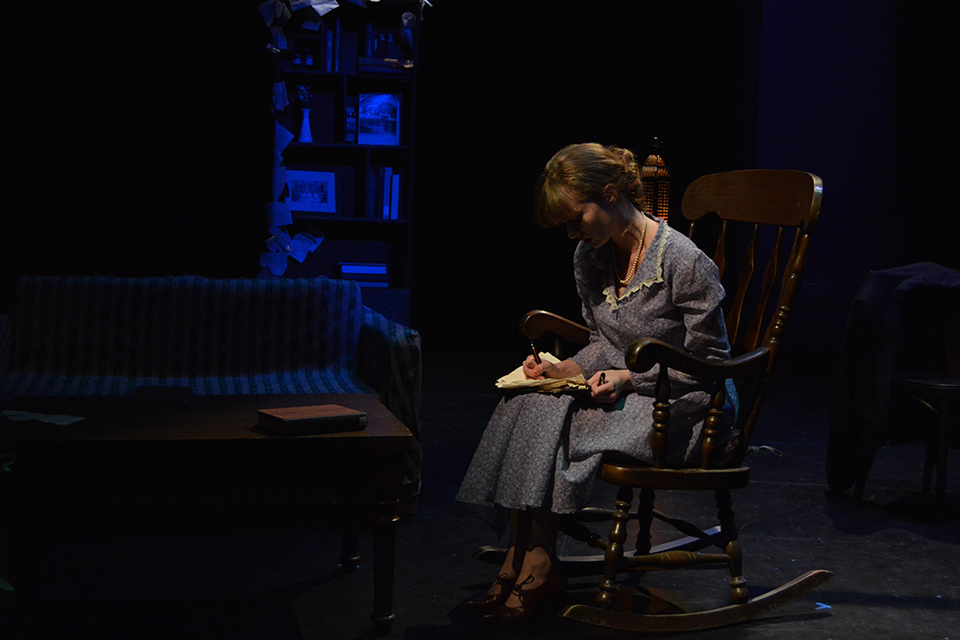 NOMADS presented "West" from March 31st to April 1st in the Glicker-Millstein Theater.

High above a formal dining room hang letters, handwritten in a scrawling font. They are replicas of real correspondence between Virginia Woolf and author Vita Sackville-West, her lover for two decades. In her original one-act play, “West,” Antonia Georgieva, CC ’18, imagines a dinner party between Woolf and Sackville-West, as well as their respective husbands, Leonard Woolf and Harold Nicolson, and their friend T.S. Eliot.

“What happens when the people we are on paper and the people we are on flesh collide?” director Nadya Shahd, BC ’20, asked during an interview after the show, which ran March 31 to April 1 in the Glicker-Milstein Theatre. While Woolf and Sackville-West wrote passionately to each other in private, publicly they were constrained to their marriages and the strict gender roles of the time. “West” explored these and other themes, cumulating in a deeply moving production despite a few execution flaws.

Tensions built between the two women’s characters throughout the production, until eventually their secret came out, to the dismay of Woolf’s husband and the deeply religious T.S. Eliot. This was no surprise, however, to Sackville-West’s husband Harold Nicolson, who was also gay and who was married to Sackville-West for utilitarian purposes.

“West” featured an all-female cast. “There’s something about women playing men that means that gendered acts are more evident. It drives a more clear visual line between the gendered worlds these different characters inhabit,” Shahd said. Her rationale came through clearly. The exaggerated performance of gender highlighted what a façade much of these famous writers’ lives were, as they were not free to be who they really were.

Although the character’s body language was well-executed, some of the timing in the production felt off. The first few scenes attempted to highlight the awkwardness between Virginia and Leonard, as well as Virginia’s anticipation of Vita’s arrival, but the duration and frequency of the pauses caused them to appear unrehearsed rather than intentionally awkward.

A scene in which Virginia frantically began to write “Orlando,” which she based on Vita’s life, included a nice blend of creative lighting and audio of Vita’s letters, but lasted for about twice as long as necessary. After a while the effects began to feel repetitive— rather than highlight Virginia’s emotions, they felt tedious and drawn out.

“West” featured some truly stunning cast performances, including an outstanding performance by Grace Hargis, BC ’20, as Virginia Woolf. Hargis’ portrayal of the anxious author never felt overdone and never slipped into comical parody. She somehow stayed precariously on edge for the entire performance, giving the production a feeling of breathlessness and anticipation. Sarah Billings, BC ’18, was another standout, delivering a judgmental yet endearing T.S. Eliot.

Some clever costume choices included Virginia's violet dress, which represented Vita’s other lover, Violet, and the flower itself, which was often given by women to their lovers during this era. Vita also donned a shawl in Virginia's favorite color, pale green, but the furry texture and vibrancy of the shade of green made it feel out of place for the period. Other details, such as tight seams drawn on in marker and a lack of hair gel on the otherwise-polished male characters, were distracting.

Overall, “West” was a fascinating look at interpersonal relationships and the secretive and non-secretive world two women shared. Its gorgeous, well-written dialogue and the skill of the actors who performed it brought it to life beautifully, and its thoughtful directorial choices gave it an impact on the audience beyond the brevity of its single act.