Hip-hop, Hecuba, and other heroes of Seneca’s Trojan Women

Hip-hop, Hecuba, and other heroes of Seneca’s Trojan Women 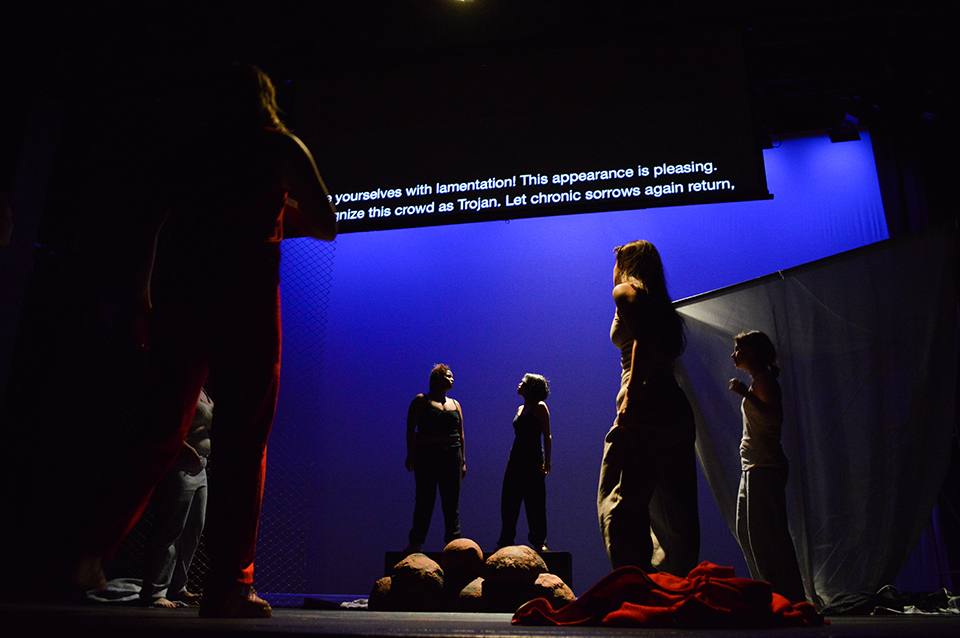 Subtitles were displayed over the stage of Barnard Columbia Ancient Drama Group's production of "Troiades," which was presented in Latin.

With last weekend’s performance of Seneca the Younger’s “Troades” or “Trojan Women”, the Barnard Columbia Ancient Drama Group delivered a dazzling ancient production in its original language for the 40th consecutive year.

The drama was driven by the choices of director and Graduate School of Arts and Sciences student Yujhán Claros to include contemporary motifs in costume and accompaniment. A hip-hop style musical score, in particular, was accentuated by the melodic spoken Latin of the script.

From March 30 to April 1, each nightly performance began with a single figure in black leaping through hanging wire mesh onto the nearly bare stage of the Minor Latham Playhouse. The light from the illuminated exit sign glinted off the swish on the gold Nikes of Paula Gaither, CC ’17, the first of two women to play the role of Hecuba.

This year in particular, directors and producers made conscious choices to integrate the artistic expression of the greater Columbia community. Breaking out of the undergraduate bubble, the team collaborated with alumni and graduate students like composer Ediz Ozelkan, a graduate student in the Center for the Study of Ethnicity and Race, and Raw Elementz choreographer and alumna Sarah Esser, BC ’15, to develop unique and modern choral movements.

The compositions themselves, too, were unconventional in their derivation from modern hip-hop music. The drama was wrought with moments of emotional poignancy, where the harmonic spoken Latin of the chorus paired startlingly well with drums and electric chords.

Discussing the choice to clad the mourning Trojan women in hoodies for much of the production, Claros said that Greek women were a source of inspiration.

“We were primarily influenced by our understanding that Greek women were covered and veiled, and so we wanted to explore covering and veiling from the beginning, and so the hoodies were conceived as an extension of covering.” Similar contemporary costume choices permeated the piece.

While from time to time the audience’s confusion at misplaced subtitle slides was rivaled by the confusion onstage over choreography and the difficulties inherent to the Latin tongue, the overall effect was rare and enthralling. The disorderly impression of some choral numbers was more than exceeded by the outstanding command of both linguistic and dramatic techniques displayed by performers like Lauren Nguyen, CC ’19, a producer and the play’s second Hecuba, Elizabeth McNamara, BC ’21, an incoming first year who played the role of Andromache, and Nathaniel Marrinson, CC ’20, a convincing Ulysses.

Rejecting the departmental exclusivity of the drama group’s past productions, producer Victoria Schmidt-Scheuber, a student at GSAS, contended that they aimed to characterize the emotions and themes of such a potent drama to students, faculty, and classics majors alike.

“Bringing the best of classics, the best of theatre, and then just the best of that human experience is something that we want for our audience and as well as for those in the group—our cast and crew, who really make all of this possible,” Schmidt-Scheuber said.