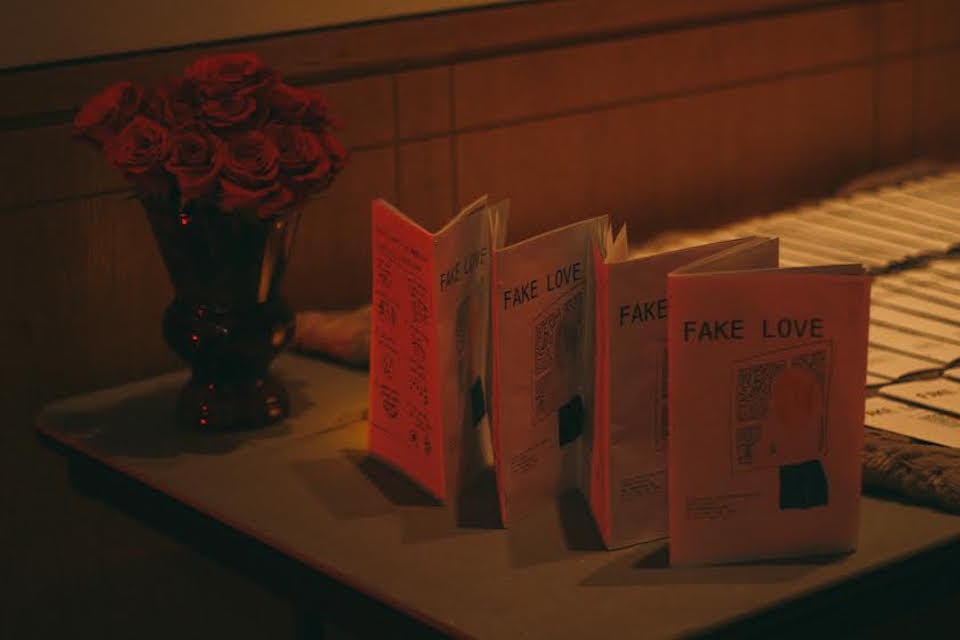 Copies of "Fake Love," a zine that Ginger Mayo, BC '20, spearheaded and launched in February, were available at a launch party on Barnard's campus.

Necks were craning as over 120 people strained to hear Ginger Mayo, BC ’20, speak about her first zine last February. The turnout was greater than expected, with students backed all the way against the wall in the small, softly pink-lit room of Sulzberger Tower.

This semester has been particularly notable in the college’s zine history, thanks to the zines that Mayo has pioneered. Centered on themes of personal growth and introspection, Mayo’s zines (“Fake Love,” which was released in February, and an upcoming one titled “Spring Awakening”) have resonated with the Barnard community to a large degree.

Mayo became inspired to create her own zine after a bad breakup last semester, which compelled her to find a creative outlet for her hurt and to call on other storytellers to share their experiences of pain and growth. “I hope that this zine makes people feel more at home with their pain, and that it encourages us to seek all the real love (it is abundant, though hidden),” she wrote in the Editor’s Letter of the “Fake Love” issue. Her first zine drew in 35 submissions of poems, illustrations, and collages, a collective outpouring of emotion and creativity from the Barnard community. 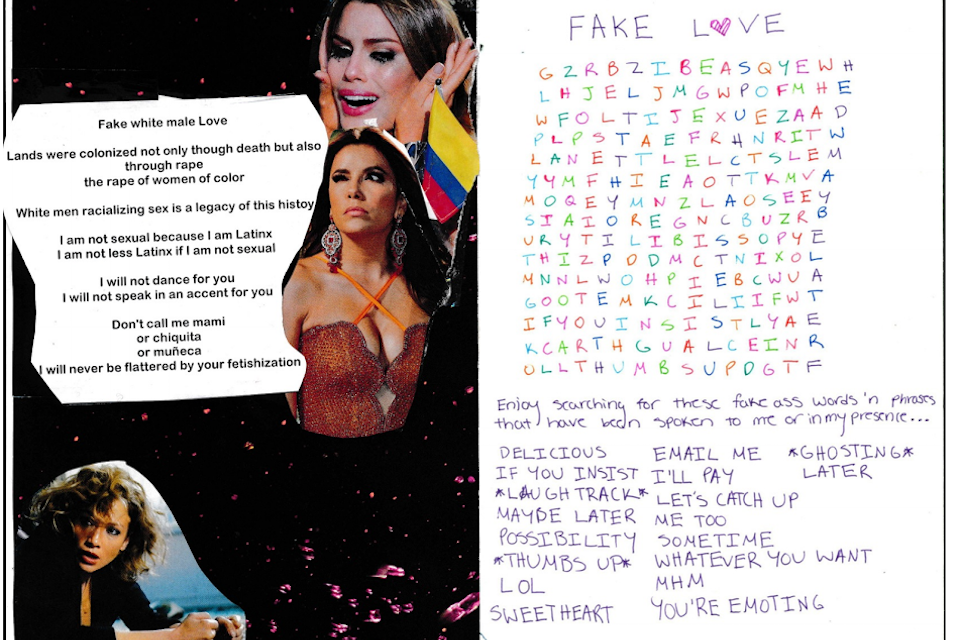 Courtesy of Ginger Mayo and Danielle Fox
An extract from Mayo's February zine, "Fake Love;" she also collaborated with Say Word for this zine's launch party.

One student submitted a crossword puzzle composed of “fake words” that people had said to her in the past, including “Let’s catch up!” and “I’ll pay!”. In a poetic submission, one girl wrote, “that is a still peaceful long pond in my soul which deserves no tossed rocks, no ripples. In 2017, Only Real Love.”

The power behind Mayo’s zine project is that it is a collaborative work. She uses social media and word of mouth to reach out to the entire Columbia community for contributions. She is persistent when calling for submissions, especially on Facebook and Instagram, where she posts about her zines at least three times a week. In February, Mayo also gained a new platform to promote her zines through the launch of Say Word, a narrative storytelling project from the WKCR news and arts department.

Say Word co-founder Danielle Fox, BC ’17, approached Mayo with the idea of adding a live storytelling component to the zines. “I told her that I think the kind of work we are looking to do with Say Word is also embedded with what she is looking to do with zines in terms of encouraging this kind of compassionate reading, listening, and storytelling,” Fox said.

Together, they gathered five storytellers—who shared experiences with “Fake Love”—for the first zine launch party. Over 120 people attended the crowded event in Sulzberger Hall last February. In addition to picking up a copy of the zine and listening to the storytellers, participants could try their hand at water colors, write love letters, get fake tattoos, and indulge in some cake.

“I enjoyed going to the launch party, especially the live storytelling event hosted by Say Word. The stories were hilarious and sad and inspirational and I think that live storytelling events are the kind of thing that could really impact campus culture in a positive way,” said Esmé Ablaza, BC ’20, who, along with Jessica Saunders, BC ’20, submitted a collage for the first zine.

The zines Mayo has created appear to have become a component of her and Say Word’s larger initiative to create more space for storytelling on campus.

“Of all of my years at this University, the ‘Fake Love’ zine event—that was the most people I ever saw together, listening to people share a wide range of intimate to vulnerable to funny to ridiculous … all of these really personal things, and for there to be a space for that, I thought it was a beautiful thing,” Fox said.

Mayo and Say Word have partnered again for tonight’s “Spring Awakening” zine launch party. Like the previous zine, “Spring Awakening” has a bittersweet theme: This time, the focus is on growth and the pains and joys that accompany it. Growth is, to Mayo, coming from “darkness to light; times when you’ve let yourself grow, times when you’ve felt you needed to grow and were unable to.”

Among the submissions for this upcoming zine, some of Mayo’s favorites include a girl who experiences a breakup as she experiences the beginnings of disordered eating, as well as another girl who finally legitimizes her unhappiness and chooses to go to therapy.

What can be said of the sizeable impact that this budding zine culture has had on the Barnard community? Mayo cites the appeal of storytelling.

“Storytelling is how our histories, our identities, and our cultures are preserved. Being honest and open about trauma is difficult, but it can have a meaningful impact for others who are unable to speak out and have their voices heard,” she said. “I hope that in the future we can keep pushing this concept and grow this community.”