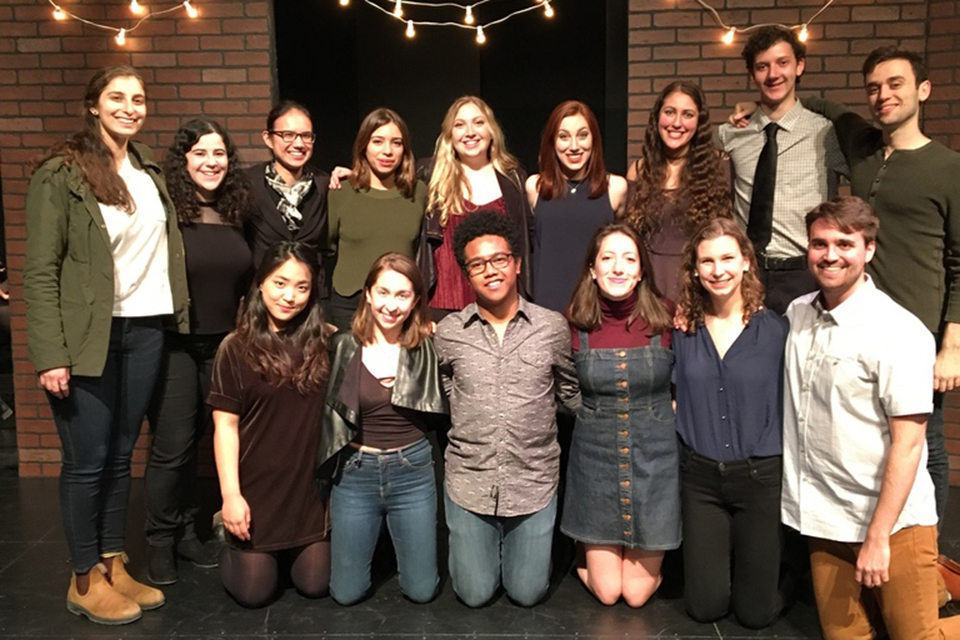 At the first of two sold-out performances this Friday night, audiences were treated to a lighthearted yet heartwarming celebration of the musical theater endeavors of this spring’s graduating seniors. The room was packed and awash with sometimes ironic, always harmonic voices, and the scene was set.

The Columbia Musical Theatre Society delivered its Senior Showcase at the Glicker-Milstein Theater on Friday, April 7, at 7 and 10 p.m. to zealous audience reception. The performance was a revival of the annual Senior Showcase first put on in 2015 and was the second iteration of such performances.

The show was a compilation of songs selected and performed by current seniors who had been in the cast of at least one musical theater show on campus during their time as undergraduates. With song selections ranging from the 1971 musical “Follies” to 2011’s “The Book of Mormon,” the production encapsulated a wide variety of Broadway-style pieces and Columbia student talent.

While everyone in the company delivered dazzling performances and displayed a particular affinity for engaging with audience members, making the performance a crowd-pleasing success, there were several members of the cast who were especially remarkable.

Zachary Flick, CC ’17 and a fixture of multiple scenes in the show, including “I’m Still Here” from “Follies” and “I Don’t Do Sadness” from “Spring Awakening,” was always the first to turn heads and to receive a hearty laugh from the audience. His energy and charm naturally heightened as he engaged with the audience and talented pianist, Sofia Geck, BC ’17.

Equally outstanding were student performers Sam Balzac, CC ’17, and April Cho, CC ’17. Balzac’s dynamic persona charmed the audience so completely that his inimitable voice was nearly drowned out by uproarious audience laughter during his rendition of “I Believe” from “The Book of Mormon.” Later, Cho’s energy radiated across the stage when she gave impassioned performances. Her impressive vocal range and intense commitment routinely won her cacophonous cheers from the audience.

Further noteworthy favorites among the Columbia musical theater community were Emma Grueskin, BC ’17, Jahbril Cook, CC ’17, and Megan Litt, BC ’17, each of whom uniquely illuminated the stage this Friday. With personas and inflections they managed to convincingly develop throughout their songs, and with solid, exceptional voices, they and their peers helped to make the show spectacular.

The talent and charisma displayed in the Senior Showcase was dazzling. However, what remained most evident—and most unique—was the actors’ and actresses’ ability to make the audience feel as warm and connected to the musical theater community as anyone involved. Looking around, one would have been hard-pressed to keep a smile from their face in the presence of such a community.