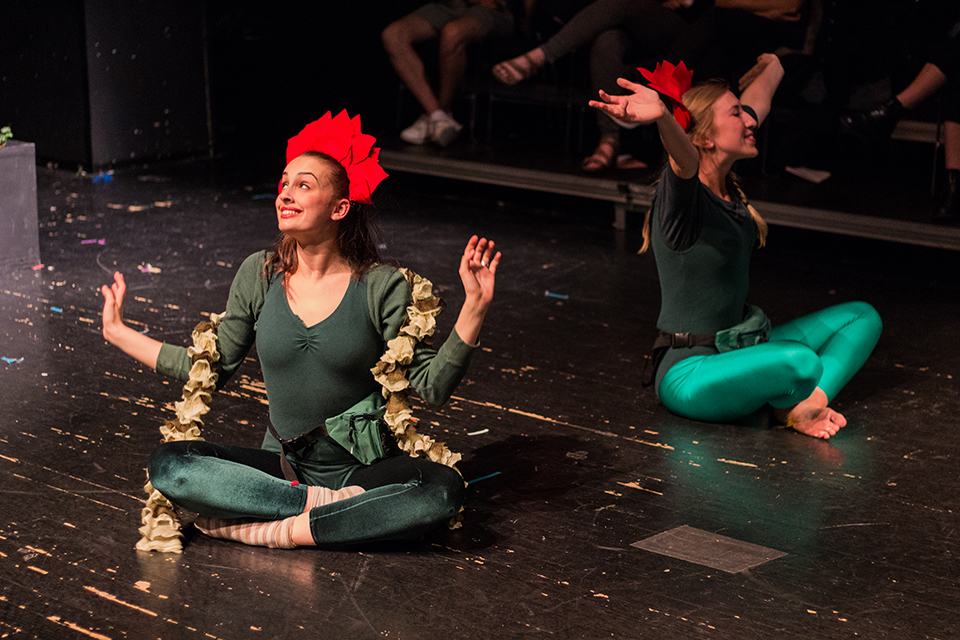 “You know what would be cool? A drunk, sad Santa Claus beating up a giant bird in front of two screaming kids,” somebody at LateNite Theatre thought, apparently.

The Barnard and Columbia comedy theater group took the stage again from April 13 to 15 with its Spring 2017 Anthology of short comedies written, directed, and performed entirely by students. This semester’s anthology, which took place in Lerner’s Black Box Theatre, featured a total of seven student plays.

LateNite has been putting on 11 p.m. performances of its semesterly anthologies since 1995. Referring to itself in its program notes as existing in “the underworld of campus performance,” LateNite is known for its bizarre brand of comedy.

This spring’s performance did not disappoint in its outlandishness. Plastic utensils were distributed to the audience during intermission for no apparent reason. Two flowers dropped acid and had sex during “Roses are Red,” written by Matthew Taub, CC ’17.

A highlight of the evening was the scatterbrained “International Cool Emporium,” written and performed by veteran performers and Spectator opinion columnists Alex Saltiel, CC ’18, and Shreyas Manohar, CC ’18. The sketch began with a suggestively dressed Henrietta Steventon, CC ’18, arguing with a sock puppet, before Saltiel and Manohar burst onto the stage in plastic sunglasses and wacky outfits. The two guys, self-described owners of the “International Cool Emporium,” jumped and danced around while engaging with the audience to determine what was cool.

The two made references to campus cultural phenomenons, labeling columbia buy sell memes as “uncool since December” and sarcastically stating that rushing ADP was “really cool, it’s, like, a great community.” The duo topped off its performance with some over-the-top levels of physical comedy, including Saltiel pretending to suck a sausage attached to his waistband, because, as the two put it, “What’s cooler than sucking a dick? Sucking your own dick! Self-care is important.” Though much of the short felt random, it conveyed to the audience a feeling that literally anything could happen next, for no reason.

A guy and a girl in a heterosexual monogamous relationship, played by Dylan Dameron, CC '20, and Sophie Laruelle, CC '17, talked about memes, “doggos,” and Sabra hummus. Amelia Arnold, BC ’17, paced around in the background in a trench coat, becoming increasingly enraged until she finally exclaimed, “I’m not watching this heterosexual bullshit again,” and slapped one of the “normies,” to cheers from the audience.

The anthology also featured an impressive mix of audio and visual media, such as the swirling colorful video and slurred music that accompanied the flowers dropping acid in “Roses are Red.”

Two of the three shorts in the second half of the anthology, “East v. West 2: Electric Boogaloo” and “Flat Earth Society,” were creative, but lengthy, and made the second act drag on a bit. The show lost some of its wacky lightheartedness as the drawn-out jokes began to feel tiresome.

Nevertheless, LateNite’s spring show was a loony lark that had audiences laughing almost from beginning to end.

Correction: An earlier version of this article reported Zane Bhansali, CC ’17, and Annie Surman, CC ’18, as the main actors in the normie play. Bhansali and Surman were in fact the directors of the play; the article has been edited to reflect this. Spectator regrets the error.