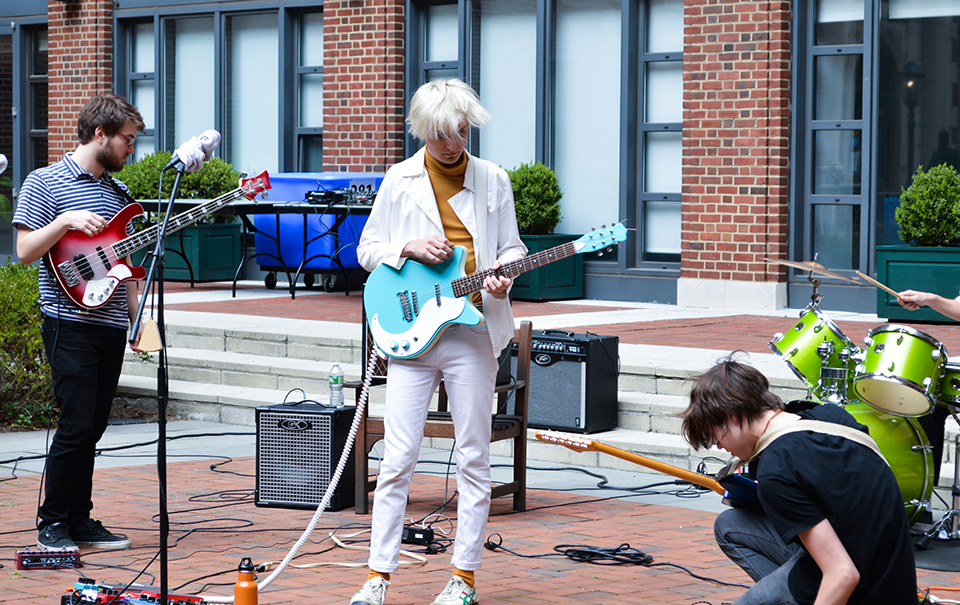 Palm Pilot, comprised of Bard College students Aiden Berglund, Rain Johannes, Laszlo Horvath, and Charles Michie, was one of the bands to play WBAR-B-Q in the Barnard quad on Saturday afternoon.

Music reverberated through the Quad, creating a brilliant acoustic setup for listeners and drawing in pedestrians on Broadway. Despite the cloudy weather, listeners sat on benches and crowded in the center of the Quad to watch the performances.

Douglas, a student at Union Theological Seminary, peppered amusing stories between songs and even engaged the audience in a vote over which song they would play next. However, Douglas forgot their guitar and guitar bag at a previous show, meaning their entire set was performed on a borrowed guitar from WBAR. Still, Douglas’ music was soft and captivating, echoing in the Quad long after they had left the stage.

Headliner Ravyn Lenae’s performance was a favorite among concertgoers, who danced along to her charismatic electronic songs. The last time Lenae, a Chicago native, performed in New York, she opened for Noname, a poet and rapper who has worked with Chance the Rapper and Saba and released her own critically acclaimed album “Telefone.”

While the Quad was an excellent choice of location, it was a change from previous years, since WBAR-B-Q has typically been held on Barnard Lawn. However, lawn seeding and a lack of outdoor space due to the construction of the new Milstein Teaching and Learning Center forced the event to relocate.

Despite the change in location, Julia Lubey, BC ’18 and general manager of WBAR, said the festival still followed tradition.

“As an entire staff we choose who we want to come. [The bands] say yes, we order some food, and everyone shows up,” Lubey said. “It’s a good time.”