The making of the mystery: Producing the Varsity Show

The making of the mystery: Producing the Varsity Show 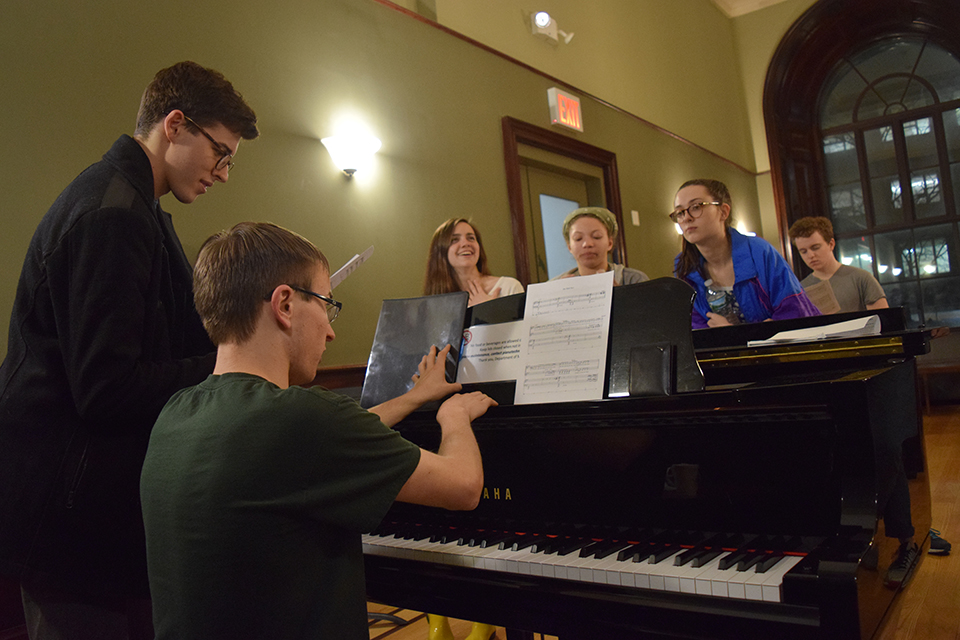 Courtesy of the Varsity Show /

Cast members of the 123rd Varsity Show rehearse together in preparation for the premiere next weekend.

“The Varsity Show is a self-selecting group of insane motherfuckers!” exclaimed cast member India Beer, BC ’20, citing wisdom that writer Amelia Arnold, BC ’17, had passed on to her. “Which I think is pretty accurate,” Beer continued, “but they’re also some of the best people that I’ve ever met.”

The 123rd Varsity Show will premiere next weekend in the Roone Arledge Auditorium. Columbia’s oldest performing arts tradition, the show is a student-written, student-directed, and student-performed musical that satirizes events that have taken place in the community over the course of the school year. Aside from its famous alumni, among whom are Oscar Hammerstein II, CC 1916 ,and Richard Rodgers, CC 1923, the show has built up a reputation on campus for its intensive drafting and rehearsal phase, which begins in November.

One of the most intriguing aspects of this process is that the plot is kept a secret until the show’s premiere. No press is allowed into rehearsals, and members of the cast and crew are forbidden from discussing details with anyone outside the production team.

“I hated the secrecy,” Arnold said. “That’s the one thing about Varsity Show that I’m not really into. That’s just a personal thing that comes along with the level of mystique and elitism that we project.”

Director Kyle Marshall, CC ’17, said that he has seen the level of caution about the show’s secrecy change over his four years of involvement. Newspapers are no longer plastered over windows of rehearsal rooms, and Marshall attributes this to a change in the way the topic of the show’s secrecy is thought about by its cast.

“I think that [the secrecy] has relaxed in recent years because the definition has changed,” Marshall said. “We want to be secretive so that we can give you the biggest surprise at the end of the year once the actual show happens, and less because we’re a cult doing all of these things that we don’t want you to know about.”

Marshall views the confidentiality of the show’s material as necessary for the audience’s enjoyment. Writer Mark Lerner, CC ’18, also mentions its usefulness, as the script is constantly changing as new events happen on campus.

“As a result, characters, jokes, entire scenes, and songs are getting added and subtracted, and if stuff gets leaked out, it creates this whole mess, and people are like, ‘What did you do with the song about that one thing that we loved?’” Lerner said.

Elucidating the particular dynamics of the rehearsal process, Marshall said that development begins informally in December with rehearsals that are mainly improvised. The period from January to early March consists of run-through after run-through, with each version receiving hours of feedback. Following the Turkey Day preview, at which the show is performed for and reviewed by alumni in early March, the script typically undergoes a complete transformation. By spring break, everyone is ready to dissect the script again and condense it, shrinking the year’s happenings at Columbia into just a few hours of stage time.

As the plot unfolds, directors, producers, and actors work together to characterize their shared Columbia experience. “It’s been super instructive to test performers in different situations, giving them different types of characters to see what sticks,” Marshall said.

Many team members cited this capacity for change and evolution as one of the principal reasons they fell in love with the Varsity Show—the malleability of the plot directly communicates the issues and controversies on students’ minds, while still allowing them to laugh at themselves. For the cast, the student body is the script’s driving force.

“While a lot of Varsity Shows have the message of convincing the faculty of one thing so they’ll change it, we want to let people know that they can use their voice.” Marshall said. “We would rather impress the students, because that is a larger group of people who can go out and affect the change.”