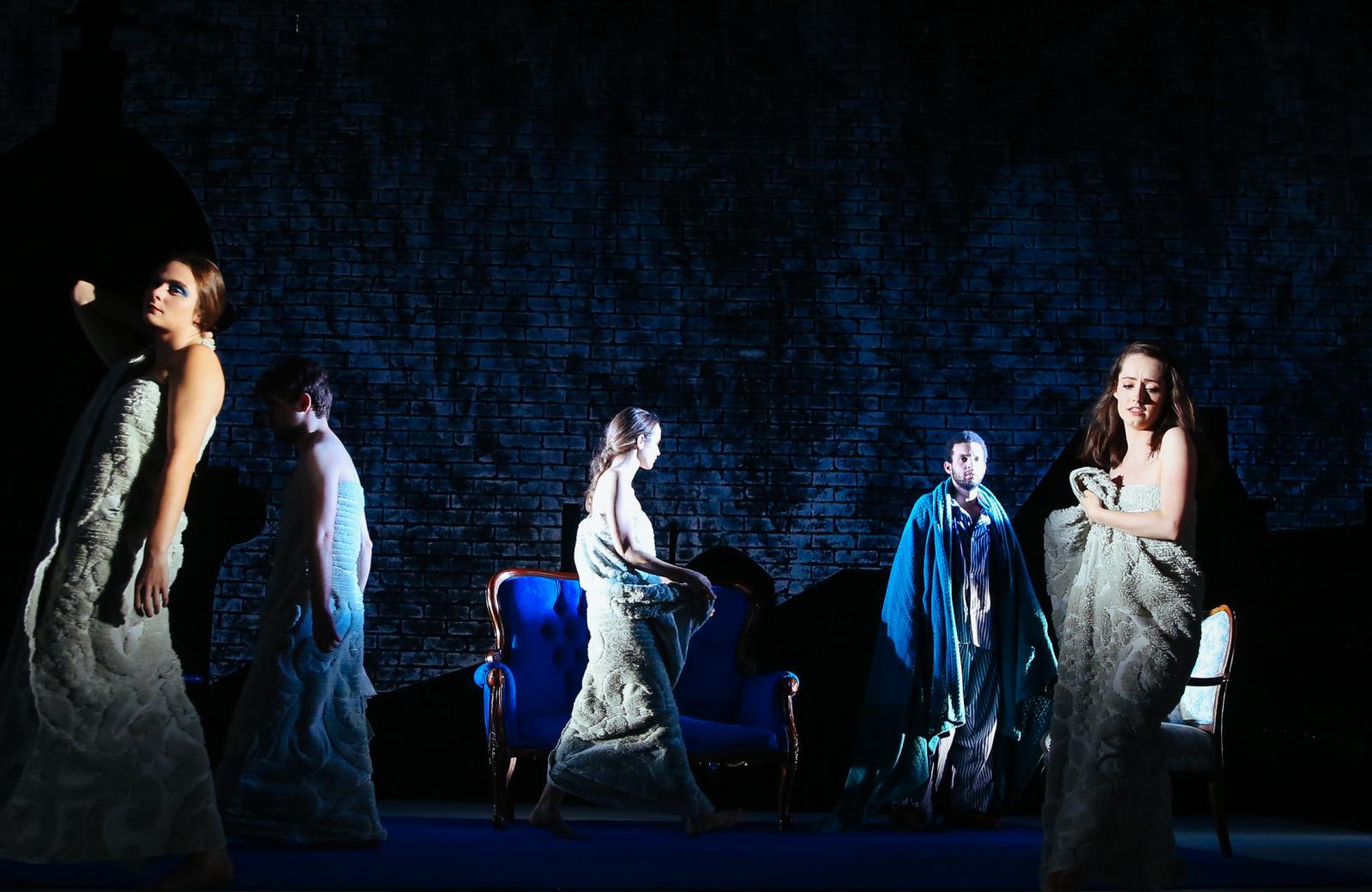 Courtesy of Barnard Department of Theatre /

The Barnard Department of Theatre held their senior thesis showcase from April 20 - 22.

Plays by students from Barnard’s Theatre Department were performed over the weekend of April 20 to 22, when four senior directors from Barnard and Columbia took the stage to conclude a year and a half of work. Each piece was performed multiple times over the weekend to allow theater-goers to enjoy the full range of theses, spanning genres from magical realism, to absurdist theatre, to political drama.

Directed by Leo Angulo, CC ’17, “Bernabé” depicts a world steeped in squalor. The setting is a small farming town in California with a substantial Mexican immigrant population, which includes the protagonist and his mother, cousin, and uncle. Adapted from a play by Chicano playwright Luis Valdez, it is a curious mixture of morality play, slapstick comedy, and magical realism. At times the play had an uneasy beat, as if unsure how to tread the fine line between humor and drama. However, it was buoyed by an all-around stellar cast, which valiantly kept up the pace and energy throughout the uneven play.

One example was Wilson Greaton, CC ’18, who delivered a portrayal of the childlike and mentally disabled Bernabé, who has declared his love for “la tierra” and is considered odd by the rest of the village. Greaton played the virgin Bernabé with a rather effeminate air, and the scene in which he is shown buried in a hole, making love to the earth, made the air thick with discomfort.

Bernabé is “loco” and has some obvious mommy problems (for example, a scene in which he has sex with a prostitute turns into a fantasy about his mother), but Greaton captured something uncontaminated and ethereal about his protagonist. Was Bernabé too pure for this world? Perhaps so.

Another thing that made Angulo’s production memorable was the work of lighting designer Laura Blaszczak, BC ’18. Blaszczak’s designs were particularly spectacular toward the end, when in a dreamlike reality, Bernabé encounters his love, La Tierra (Isabella Oliva, BC ’20), the personification of the Earth. Mimicking the birth of nature, the lighting here was a beautiful prism of rose pinks, oranges, and clear yellow, giving the impression of staring into the heart of a budding flower, or watching the sun at the end of a long highway go up in flames.

Overall, “The Saliva Milkshake” was tighter and more polished than “Bernabé.” That being said, the play, directed by Talley Murphy, BC ’17, lacked the emotional spark required for the audience to invest in the characters’ fates.

However, that may have had to do with the choice of material; the play, written by Howard Brenton, is a short piece about a young man named Martin who comes home to find his friend from his revolutionary socialist days, Joan, fleeing after committing murder. For it’s length, the play feels over-packed with grim philosophical musings.

The set was impressive; enveloped in a neo-noir ambiance complete with fluorescent white lighting, cigarettes, and guns dangling from wires. Yet why did there need to be props attached to wires, when Brenton’s play was written as a part of “Plays for the Poor,” a series of plays he intended to be performed for those in poverty, with a minimalist set and little stage design? In short, Murphy’s added theatricality made the play prettier to look at. There was also the chilling intensity of Murphy’s small cast: Nell Bailey, BC ’19, Devin Hammond, BC ’20, and Joshua Zoeller, CC ’18, all made an effort to add a flair of distinction to the heavy, sobering storyline. The juxtaposition between Hammond’s soft-spoken Joan and Zoeller’s nervous, chatty Martin added refreshing originality. “Devon Hammond should be a James Bond girl,” one audience member remarked at the end of the play.

For those unfamiliar with Eugene Ionesco’s play, the unraveling of “The Bald Soprano” came as a surprise. Audience members were jolted by a growing sense of mass hysteria on stage, in what originally appeared to be an idyllic home belonging to Mr. and Mrs. Smith (played by James Ritchie, CC ’20, and Bailey Coleman, BC ’19). Directed by Brittany Searles, BC ’17, “The Bald Soprano” is a play of absurdity, with couples trapped in seemingly arbitrary marriages. Mindless chatter becomes even more meaningless when highlighted by the incessant ticking of the many clocks that Searles placed on set and isolated through a technique of theatrical absurdity.

It felt like a critique of humanity in the 21st century and a growing awareness that meaningful connections are harder to form and that perhaps everything one says nowadays is reduced to clichés and arbitrary phrases.

Of the three productions so far, Searles’ play had the audience most engaged. At times, it felt like sitting through the taping of a sitcom, given the loud bursts of laughter from the crowd that punctured the performance. One particular standout was Coleman, who avoided a stock-type portrayal of the housewife Mrs. Smith. One only needed to look at her face throughout the performance to glimpse the hysteria going on in her character’s mind.

A modernized interpretation of Seneca’s “Phaedra,” this brief, charged, and riveting performance was the tragic tale of a stepmother plagued by an incestuous infatuation with her stepson and her family’s subsequent fall from a position of political advantage.

The play was adapted for the modern stage by playwright Sarah Kane in the 1990s, featuring contentious and sometimes disarming depictions of physical and mental violence, sexual frustration, and the mind games of a royal family whose dysfunction trickled down to affect its citizens. Director Waverley Engelman, BC ’17, however, stated in her director’s note that she hopes the audience shared her conviction in the story’s timeless warnings against cruelty and manipulation—and against overwriting one’s personal dignity for the sake of public image.

Steve Ali, CC ’18, was a poignantly insensitive Hyppolytus, Phaedra’s absent husband’s son and the object of her unrequited love, who transformed the production with his ease on stage, powerful speech, and physical movement. The audience saw the mood of the show shift as he exited his apathetic, depressed state and performed a vigorous interpretive dance during a scene change. Sophie Laruelle, CC ’17, a well-known name in the Columbia drama scene, drew gasps and thunderous applause from the audience from her first impassioned dance as Phaedra to her final spoken line.

Overall, it was a weekend of demonstrated hard work and talent on behalf of everyone who worked to actualize the four seniors’ creative visions on stage. “It was truly surreal seeing the culmination of so much thought and preparation,” Searles said. “I’ve had the privilege to work with the other directors for years, and watching their work was truly a pleasure. Each piece encapsulated their distinct styles that I’ve seen them grow and develop since our first directing courses.’