2017 Varsity Show: ‘A Tale of Two Colleges’ that misses the mark

2017 Varsity Show: ‘A Tale of Two Colleges’ that misses the mark 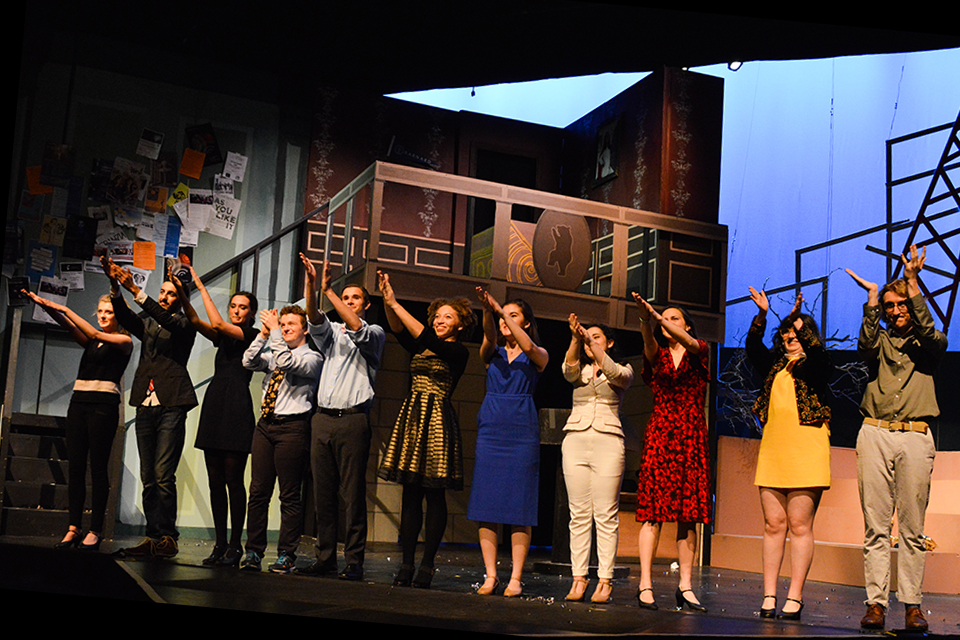 Cast members of the 123rd Varsity Show gather onstage for their final bows at Friday's performance.

The 123rd rendition of Columbia’s favorite musical showcase may not have lived up to its reputation on Friday night. Interspersed with distracting lighting mishaps, microphone complications, and disjointed scenes and character dynamics that came from a largely inaccessible and underdeveloped plot, the energetic show was met appreciatively by the audience, but not as enthusiastically as in past years.

This year’s production, performed from April 28 to 30 in Lerner’s Roone Arledge Auditorium, is titled “A Tale of Two Colleges.” Written by Amelia Arnold, BC ’17, and Mark Lerner, CC ’18, the story takes place in an alternate reality where the financial instability of Barnard leads Barnard President Debora Spar (Rachel Greenfeld, BC ’19) to accept a buyout from Columbia to absorb the college into the larger University just minutes before her departure for Lincoln Center. The chaos that ensues centers on a small band of Barnard and Columbia College seniors rising up against administrative tangles from both schools to try to reverse the merger. While this plight of the underrepresented underdog against administrators has traditionally been a common feature of the Varsity Show, the writers may not have made their show accessible to a large portion of the audience by choosing to focus on such a specific demographic.

With a show that historically takes its material from the ever-evolving campus climate and major happenings of the year, the choice of a Barnard-Columbia merger plotline seemed like a missed opportunity. The chronology of the show was decidedly lacking, and the conflict—and climax—was never quite engaging, making the speedy resolution more confusing than satisfactory. An anticipated yet underdeveloped romance between main characters Zoe (Lauren Wilmore, BC ’20) and Liv (India Beer, BC ’20) added little to the story, but a few songs in particular—composed by Simon Broucke, CC ’19, and Max Gumbel, CC ’18—sustained the audience’s interest through the vocal ability of the performers and the lively score.

While the difficulty of hearing vocals over the churning harmonies of the pit orchestra might be attributed to the less than ideal venue of Roone, some of the bungled choreography in the first act and overwritten dialogue cannot. Many of the jokes seemed only to land because the audience expected them to be made, and characterizations like that of interim Barnard president Rob Goldberg in particular, played by Jacob Kaplan, CC ’20, were baseless. Goldberg’s role was one-dimensional in its melodrama, depicting him as a flamboyant, out-of-touch, and idiotic middle aged man trying uncomfortably hard to connect with youth culture but failing to understand the basic tenets of feminism. 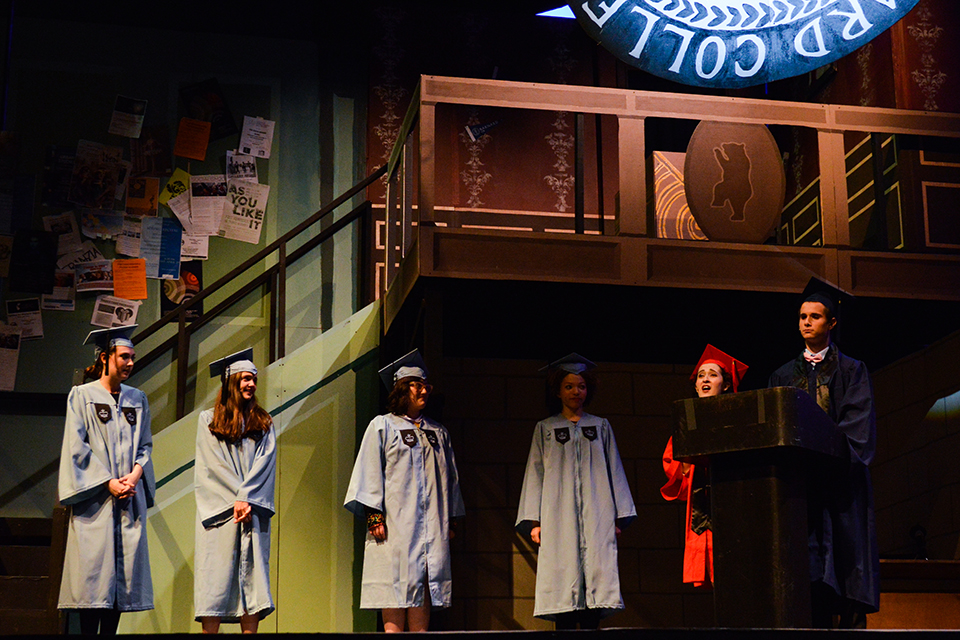 Many of the show’s technical confusions can be attributed to opening night missteps, and with any luck the Varsity Show will see substantial improvements over the course of the weekend.

Still, this year’s Varsity Show was not a total flop. There were several invigorating and energetic dance sequences that left the audience roaring from their chairs. The first act even featured a tap number in Tom’s Restaurant, referred to as “the 1020 of restaurants” and “the greatest diner at the greatest university in the greatest city in the world,” complete with chair dancing and a saxophone solo by Joel-Isaac Musoki, CC ’20.

There were also some excellently delivered jokes and some terrific acting. Most of these, as expected, put the University’s infamous stress culture as the butt of the joke. As Tom Phelan, CC ’20, said, playing the role of the chipper Columbia College Student Council President Gavin, “It didn’t say anything about memeing your loneliness away in the admissions brochures.”

The supporting characters, most notably Phelan, along with Harrison Gale, BC ’20, as WBAR DJ Barbara, and Greenfeld as Spar, ultimately stole the show. Gale’s bird-obsessed onstage persona was a rare bird herself, and she delivered each eccentricity in her unique, deep tone that frequently left the auditorium lost to guffaws. Greenfeld perfectly captured melodramatic mannerisms typical to Spar that the audience ate up. Phelan simply lit up the stage throughout the night with unwavering energy despite the meandering plot.

Yet both this year’s show and the Varsity Show as an annual project will go on. The undergraduate experience continues to evolve, and so will our comedic interpretation of it. And with such young and promising rising actors in the mix, there will be a great deal to look forward to in future years.