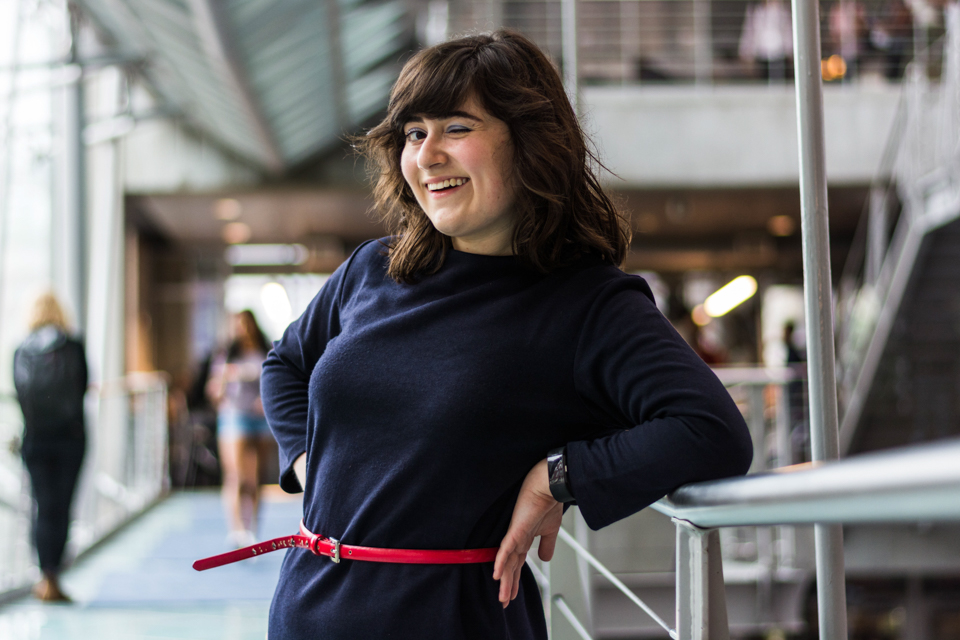 Harrison Gale, BC '20, will perform in two comedy groups and two theater productions, as well as hosting a weekly radio show, this semester.

When Harrison Gale, BC ’20, auditioned for the 123rd Varsity Show, she forgot half of the words to the song she was singing. Despite the mishap, she was cast as the cheeky, eccentric WBAR DJ, Barbara.

“I’ve since learned to put whatever doubts and insecurities I have away into a small box and simply try my best,” Gale said.

But Gale’s talents don’t end with musical theater and a positive attitude. In addition to being a cast member of XMAS!, Mary Stewart, and the comedy groups Third Wheel Improv and Chowdah, Gale is a staff writer for The Federalist and co-hosts a WBAR radio show named Writer’s Unblock.

An English and film studies major with a passion for comedy, Gale always knew she wanted to continue with theater in college. Initially surprised at the sheer enthusiasm and welcoming nature exhibited by the Columbia theater community, she found that it has helped her flourish during her short time here.

“I was pleasantly surprised to learn that there was a whole other world here, and I feel very lucky to have been embraced with open arms by so many people in the student theater community,” Gale said.

Gale maintains a delicate balance between her involvement within Columbia’s drama and comedy community and her academic work. She feels that she has “definitely overcommitted [herself] this year.” Nevertheless, Gale remains passionate about her endeavors and is prepared to pull back when she must, admitting that she recused herself from one of the productions she was involved in.

Gale shared that her key to being successful and remaining on top of her various commitments is knowing her limits and prioritizing sleep and self-care.

“You’re not going to be helping the group if you’re coming to rehearsal miserable, or you’re so tired you can’t remember your lines.” she said. “It’s challenging to have to pull back, but at the end of the day, you can’t do any of that stuff if you’re a physical and mental mess.”

“I think it’s recognizing that no, you can’t do it all, but you can do a lot of the things that you like to do,” she added.

She described her acting philosophy as a combination of taking positive risks, banishing insecurities, and consuming as many types of media as possible in order to expand her repertoire.

She cited Robin Williams and other character actors as sources of inspiration for their ability to be generous with other actors and support the story.

“Theater is a communal effort,” Gale said, “and at the end of the day, acting is about empathy and trying to understand another person’s story. The more you’ve seen and watched and experienced, the easier it is to empathize and put yourself in someone else’s shoes.”

Thinking back to her stressful audition for the Varsity Show last year, Gale recalled her gratitude to the directors for giving her a second chance. Refusing to talk up her own abilities, Gale said, “I’ve never thought that I can do anything other people can’t, but I take risks. As the classic high school motivational poster says, ‘You miss 100 percent of the shots that you don’t take.’”