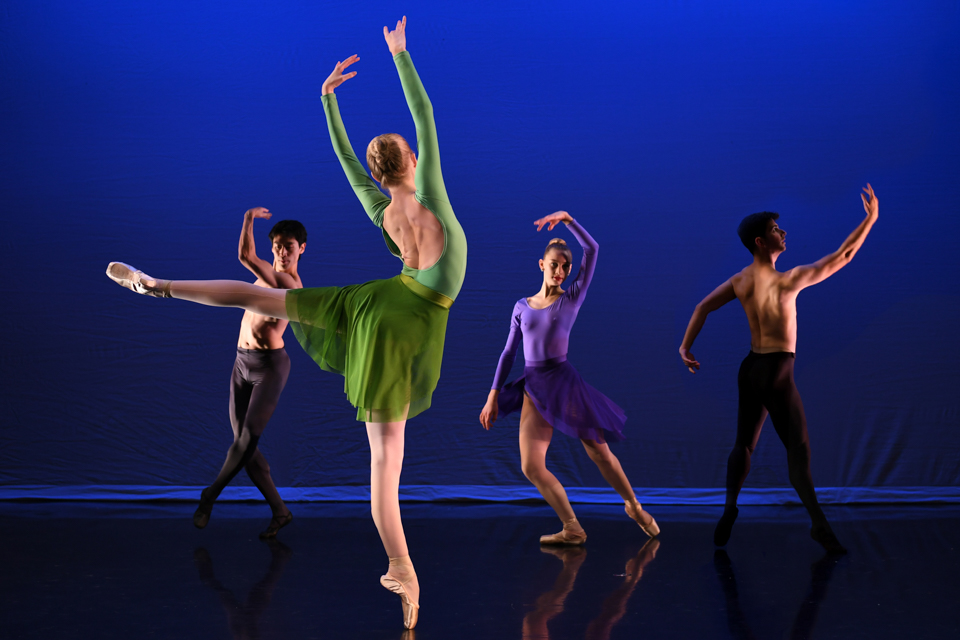 Columbia Ballet Collaborative’s fall 2017 showcase at the Manhattan Movement and Arts Center on Friday and Saturday nights pushed against traditional ballet stereotypes by presenting six diverse, modern, and exciting pieces. From original works to a revival of a prominent 20th-century piece, the night was a modern take on classical ballet.

Saskia Randle, BC ’19 and the artistic director of CBC, introduced the night’s performance, saying that the group’s goal is to “promote collaboration and creation of new work.”

The standout performance of the night, “Los Cuatro,” was choreographed by Antonio Carmena, an adjunct professor of ballet at Barnard. The performers of the piece, Nicholas Rio, CC ’19, Kennedy Roese, GS ’20, James Shee, GSAS ’19, and Alexandra Waterbury, GS ’21, seemed to have stepped off the stage of the New York City Ballet.

“Los Cuatro” highlighted the contribution that collaboration between the schools, most notably the School of General Studies, brings to the Columbia ballet community. The two couples were intricate, mature, and powerful, showcasing remarkable athleticism in explosive leaps and turns.

The other pieces performed were diverse in tone and content, successfully showcasing the versatility of the CBC ensemble.

The first piece of the night, “Transpositions,” was choreographed by Max Goldner, CC’19. Featuring nine dancers—three men, three women in flat shoes, and three women in pointe shoes—the piece played with the structures of an ensemble. It was composed of angular movements to a hurried score and a repeated motif of flat palms.

“Transpositions” was decidedly modern, with an architectural focus on the specific formations created as dancers wove in and out of lines and shapes. The dancers met the energy of the score with vigor and athleticism, using their arms to create angles and highlight the grace of the piece.

In contrast, the most classical piece of the night was Antony Tudor’s well-known American ballet “Continuo.” The piece was staged by Amanda McKerrow and John Gardner, two representatives of the Antony Tudor Trust who were acclaimed dancers with the American Ballet Theater in the ’80s and ’90s.

CBC honored the history of the piece by giving a polished and mature performance. The ballet featured three couples performing intricate partner work and lifts, and the dancers handled the difficulty with ease.

The other three pieces of the night were new works by New York City-based choreographers. As described on its website, one of CBC’s central goals is to facilitate “collaboration between professionals in the New York dance community and Columbia University students.”

“For Adaline” was choreographed by American Ballet Theatre corps de ballet member Kelley Potter. Featuring a bright blue background that contrasted with the dancer’s stark red costumes, the ballet was dramatic but serene, with beautiful emphasis on flowing arms and crisp footwork. The final section of the piece, in which the dancers were bathed in a golden light and moved to an a capella song, made for a quietly meditative ending.

The lights rose again on “Vestiges,” a piece choreographed by Janice Rosario, after intermission. It was modern in its shapes and angles, featuring dramatic movement and high-energy leaps. The five dancers in the piece kept up with its physical demands, with legs reaching higher and jumps pushing further at every moment.

The biggest ensemble piece of the night was “Begin Again,” comprised of two acts choreographed by former Ballet Austin member Michelle Thompson. Dancers wandered onstage in silhouette, backlit by a soft yellow light. The first act was centered around the sound of a clock ticking and the interplay of syncopated movement against the steady beat. In modern dress, 11 women and one man moved as a unit and in individual featured parts.

The first section, which was more serene and optimistic, was followed by a darker second act that highlighted isolation and the feeling of being trapped. A beautiful gesture of reaching upwards into the spotlight with frantic arms set the tone for the section, and the dancers seemed to question their place onstage. The ensemble’s performance was strong, and the contrast between the two acts showed off their versatility.

Every piece in the showcase was followed by whispered excitement from the audience reflecting on what they had just seen and anticipating more. The cheers and shouts of “Bravo!” after the final piece were well deserved, as CBC’s fall performance set a high standard of artistic excellence for the group.