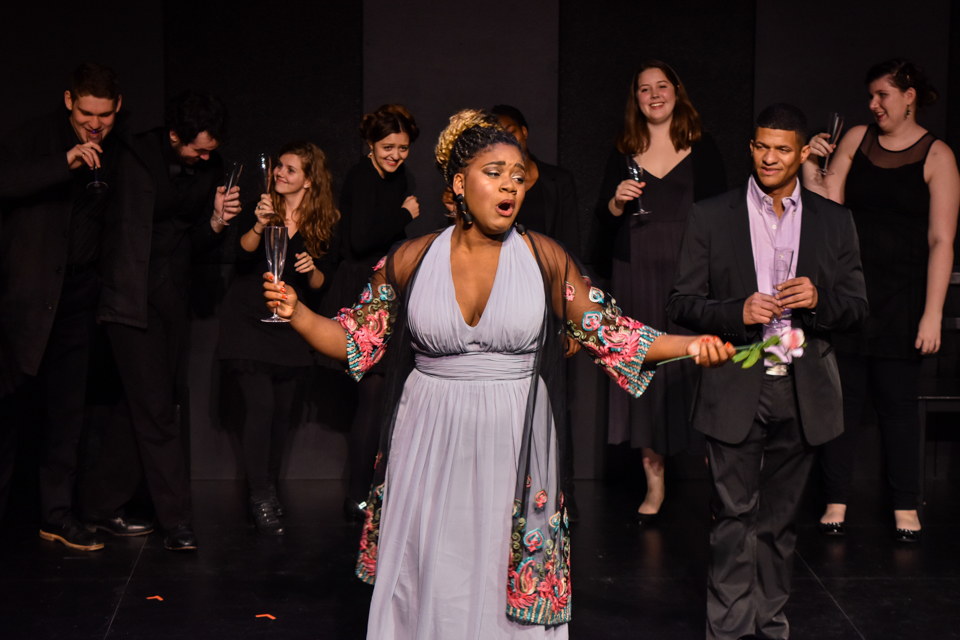 Ashley Grier, SoA '17, was one of the standout performances of the night.

The stage, bare apart from a couch and a few tables, the walls dark and undecorated, and the performance, an assemblage of scenes from different operas: On the surface, the New Opera Workshop’s fall repertory could be perceived as thrown-together. But the moment the orchestral prelude began, the set faded to a clean simplicity that allowed the musical prowess of the performers in this operatic collection to shine through.

The Columbia University New Opera Workshop presented the first night of their fall collection of repertory scenes on Thursday night, including pieces from operas such as Beethoven’s “Fidelio,” Mozart’s “Don Giovanni,” Verdi’s “Nabucco,” and Humperdinck’s “Hansel and Gretel.” Performed in the Barnard Glicker-Milstein Theatre, the program opened on November 30 and will run until December 2.

The collection of eight scenes was expertly juxtaposed, ranging from a dramatic sorrowful duet, to a comedic trio, to the dramatized slaying of a giant snake. The program drew from the works of five composers, written in four different languages. English subtitles were projected across the back wall, allowing audiences to follow the story accompanying the melodies. Whereas some traditional operas can become grueling in their length, the variety of the program kept each performance engaging.

The program’s opening piece, taken from Verdi’s “La Traviata,” was led by Ashley Grier, School of the Arts ’17, as courtesan Violetta. Grier’s performance felt effortless and her tonal clarity projected in the theater. Sarah Fleiss, CC ’21, was equally effervescent, harnessing grace and captivating emotion as the heartbroken Donna Elvira in “Don Giovanni,” and with pure vocal prowess in the best performance of the collection, the beautiful “Lakmé” duet.

Other standouts included Madeleine Collier, BC ’19, as both Gretel in “Hansel and Gretel” and one of the three ladies in “Die Zauberflöte,” imbuing each of her performances with a bright energy layered in vocal precision. Mike He, Mailman School of Public Health ’20, effectively opposed Fleiss’s Elvira as Leporello in Don Giovanni, and aroused audience laughter with his animated demeanor.

The student orchestra, skillfully conducted by Katie Cooke, CC ’19, rounded the repertory in expert fashion. Succinct, yet fulfilling, and interspersed with moments of expert clarity, the New Opera Workshop’s repertory was fully deserving of a “bravo!”