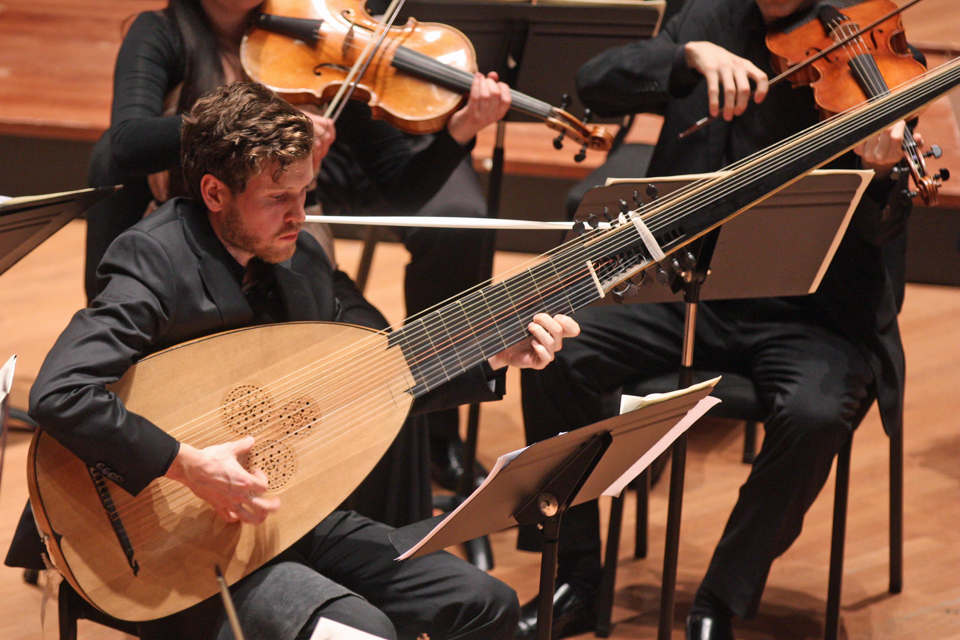 A member of Juilliard415 plays the theorbo.

Soft pink light illuminated the back of the Miller Theatre stage on Tuesday night as concertgoers sipped free drinks and enjoyed music from The Juilliard School’s period-instrument ensemble, Juilliard415, a group made up of graduate students in the Juilliard Historical Performance program which works with a roster of well-known musicians including William Christie, Masaaki Suzuki, and Harry Bicket.

The performance is part of Miller Theatre’s ongoing pop-up concert series, made up of “pop-up” concerts that take place sporadically throughout the year on Tuesday evenings. This winter’s series began in January with performances from pianists Eric Huebner and Steven Beck. During performances, concertgoers sit on the stage itself around the musician, while overflow audience members sit in the auditorium seating, where view of the performers is somewhat impeded.

Free admission is accompanied by a free drink for audience members over 21 and an hour-long performance. At Tuesday’s show, drinks were distributed from a bar in the corner of the stage. String lights hung from the ceiling, giving the typically austere Miller Theatre a more intimate feel for the evening.

Performances vary from concert to concert. This Tuesday’s performers featured four musicians from Juilliard415’s larger ensemble. Juilliard415 performs music from the late 16th to early 19th century using period instruments. The quartet focused on Baroque-era music, using the type of instruments that would have been used at the time of its composition: a violin, cello, flute, and theorbo.

The period instruments provided a unique touch—many modern concertgoers unfamiliar with baroque music do not have a chance to see baroque instruments such as the theorbo, a plucked string instrument with an elongated neck in the same family as the lute and oud, onstage. However, the authentic instruments also showed their limitations, as the violinist had to stop and retune midpiece due to swelling in her organic violin strings due to humidity.

Pieces performed included a work from Leclair, Boismortier, Porpora, and as the violinist joked, “underground artist” George Frideric Handel. The overall tone of the group’s set was light and airy, which was suggestive of the coming spring.

After the show, performers mingled with and answered question from audience members, who milled about the stage and leisurely filed out of the theatre.

The next pop-up concert will be on April 3, featuring contemporary music collaboration Ensemble Signal. Violinist Lauren Cauley and pianist David Friend will perform solos and duets.