‘What I’ve Been Looking fORCHESIS’ delivers nostalgia and fun

‘What I’ve Been Looking fORCHESIS’ delivers nostalgia and fun 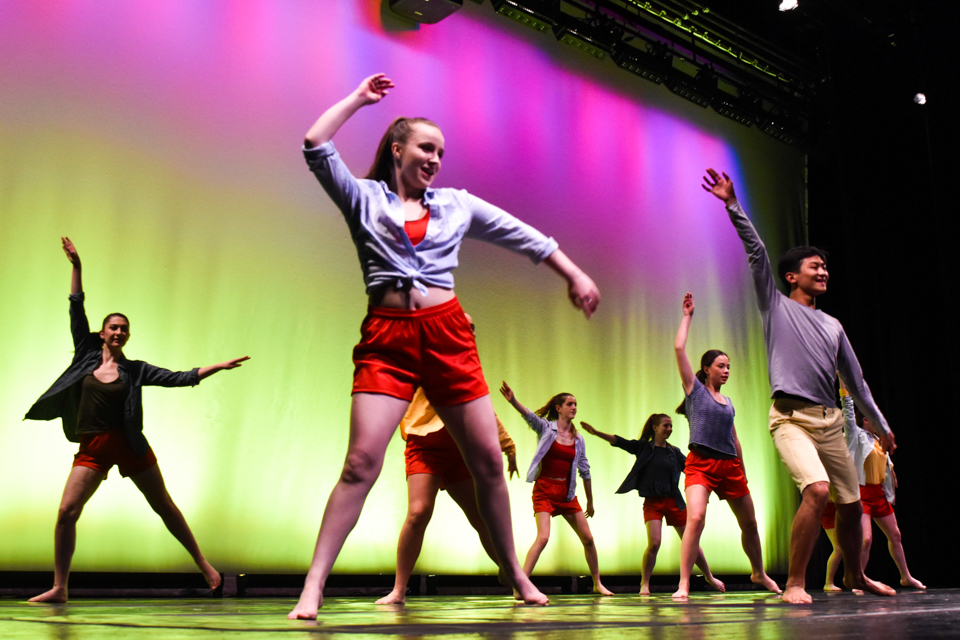 The lights of Roone Arledge Auditorium lowered, silhouetting dancers against the purple light of the backdrop. The audience whooped and hollered, screaming out names as they recognized the poised silhouettes at a biannual performance by Orchesis, Columbia’s largest performing arts group.The title of the show this semester, “What I’ve Been Looking fORCHESIS,” is a nod to one of the “High School Musical” duet ballads; as the title implied, the show’s theme was the Disney film. In what amounts to nostalgia for Columbia’s late-’90s-born undergraduate population, the “High School Musical” theme was a chance to revisit the campy movie soundtrack of the student body’s collective elementary school years.

Orchesis, which casts every dancer who auditions for the show, provides students with a low-stress and enjoyable way to perform dance on campus.

“I love Orchesis because it’s a really inclusive dance community with just so many people that are passionate about the same thing,” Kat Bartley, BC ’20, said. “It’s just a really chill way to keep pursuing our love for dance in college and keep it up without it being too much of a time commitment.”

The show started off with another nod to nostalgia for Disney classics of the ’00s generation, with a piece set to songs from “The Incredibles” titled “No Capes,” choreographed by Lauren Wilmore, BC ’20. The piece was equal parts punchy and nostalgic, with dancers mimicking the movement of an animated action movie as strobe lights flashed in the background. Wilmore explained the short timeline that dancers have to practice before the performance.

“All of these pieces only rehearse for one hour a week. I believe it comes out to be nine rehearsals total, or something like that, which is really not that much time,” Wilmore said.

After Wilmore’s “No Capes,” the backdrop went blue, and the next piece, “Anyone Who Knows What Love Is (Will Understand),” choreographed by Gabe Garon, CC ’21, began. Dancers swayed against a purple and red backdrop moving their arms dramatically.

“In Cold Blood,” choreographed by Sanjana Marcé, CC ’21, was one of the most impressive technical pieces of the show. It started slowly, as the lights raised to reveal dancers dressed entirely in black. The pounding music of the piece built to a series of lift turns as the dancers raised each other above their heads.

The next piece, “in which we attempt to hold hands with the people we don’t yet see but still live with”, was slower and more melodic, with dancers in skirts and flowy pants moving in wide sweeping motions. Dancers’ limbs lifted up, and the piece ended with dancers laying on their sides as their hands floated up toward the ceiling. A glance down at the bill showed the decision of the choreographer, Marya Merriam, CC ’19, to include activist undertones in the piece: “For every half-degree of warming … societies will see between a 10 and 20 percent increase in the likelihood of armed conflict. … Surely this blindness will not last.” This motif was reflected in the choice of green and pink lighting hinting at nature and the importance of its preservation.

In the most modern piece of the show, “29 #Stafford APTS,” dancers in black formed distinct groups, entering from both sides of the stage and switching formations, from lines to clusters to one solitary dancer. They touched and ended the piece kneeling on the ground.

The show’s finale was as exuberant and ironic as the atmosphere of the entire show as all 130 of Orchesis’ dancers poured out onto the stage for one last musical number, replicating the finale dance number in “High School Musical” in synchronized steps. It dissolved into improvised dancing and the full stage of dancers laughed and yelled out in response to the calls from the audience.

At a school so often cited for issues of student isolation, poor mental health, and suicide, the performance seemed to be almost an act of collective catharsis. By casting everyone who auditions, the group seems to provide a space of support and community in both structure and implementation.

Yet the show’s levity contrasts with the truly substantial accomplishment of pulling together a performance with 130 dancers and 13 pieces and choreographers in less than a semester.

At the end of the show, the side doors of the theater opened and dancers in makeup and costumes streamed out into the crowd. Surrounded by friends and family, many with arms full of bouquets, the atmosphere was jubilant.

Brianna Zúñiga, CC ’21, spoke about her involvement while her grandmother waited beside her. She cited Orchesis’ creative atmosphere as her reason for joining.

“I wanted some sense of community on campus that was very creative-based, and just where I could just be working on several different layers with students—we’re playing choreographer, we’re playing dancer, we’re playing performer; there’s just a lot of changing dynamics within it that just makes it so fun,” Zúñiga said.

Orchesis What I've Been Looking FOrchesis