In Proving Up’s Miller Theatre debut, the American dream dies in a sandbox

In Proving Up’s Miller Theatre debut, the American dream dies in a sandbox 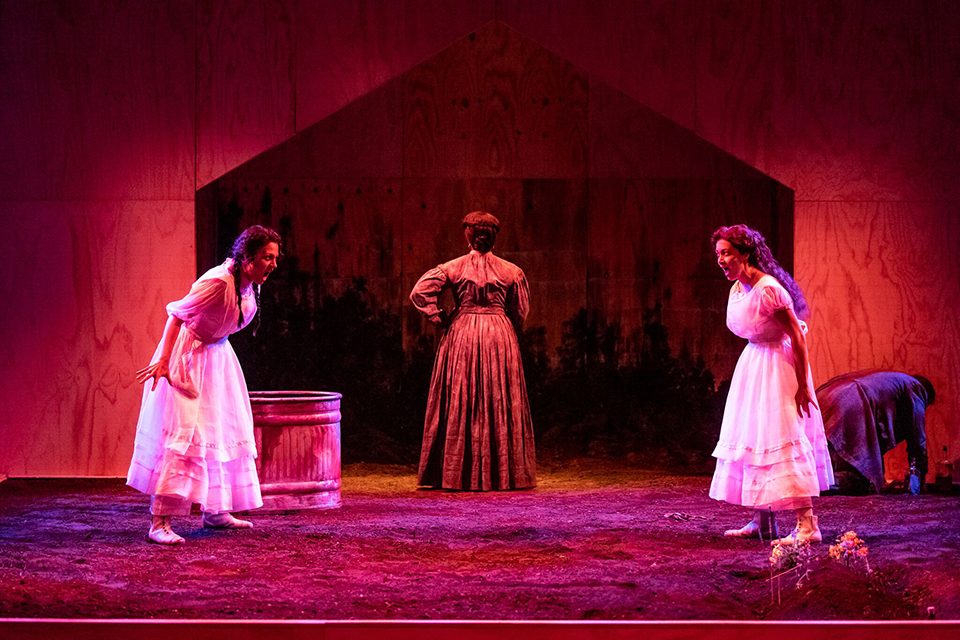 "Proving Up" put a horrific spin on the tale of a family in Nebraska during the 19th century.

The words “opera” and “horror” are rarely used in the same sentences. Traditional operas à la Puccini, Bizet, and Verdi call to mind soaring opera house ceilings, elaborate sets, drama-filled romances, and ultimately great, heartrending, tragedy. But in Missy Mazzoli and Royce Vavrek’s opera Proving Up, which premiered in New York on Wednesday at Columbia’s Miller Theatre, the set is nothing more than a sandbox representing the arid land of Nebraska, and the story begins in hopelessness only to end in a tragedy that leaves the audience horrified.

The opera follows the travails of the Zegners, a pioneer family trying to become landowners by taking advantage of the U.S. Homestead Act of 1862. In order to “prove up,” pioneers like the Zegner family have to stay on the land for five years, build a sod house, fulfill a host of other requirements, and most trivially of all, own a glass window. The family, luckily, has owned a glass window from the beginning and is generous enough to share it with their neighbors when the inspector comes around.

The audience soon learns that the Mr. Zegner really stole the window from a dead neighbor who had already proven up. Even more terribly, on his way to deliver the window to his neighbors, the Zegners’ youngest son Miles is killed by “the sodbuster,” a grim reaper-like character.

The horror element of the story is unrelenting and permeates every layer of the opera. Mazzoli’s score, with its almost disturbing levity, includes ominous spins on usually cheerful fiddle tunes, unsettling dissonances, and an unobtrusiveness that does not allow the audience to ever comfortably sit back in their chairs. The two dead sisters of the Zegner family are onstage throughout the entire opera, playing a morbid game of hide-and-go-seek around their living family members, waiting for one to join them.

The unsettling imagery occurs on a more superficial level with the obvious blood and gore across the eldest son’s body as he returns from a terrible, unnamed accident. There is an entire song by Mr. Zegner about strange trees planted by their neighbors, trees which after a couple of minutes reveal themselves to be bones. Mrs. Zegner, while praying for rain and mourning her dead daughters, pulls the daughters out of their graves as their ghosts dance around her.

Most disturbing of all, however, is the opera’s message about the American dream itself. After suffering enormous losses, the Zegners still believe that they can prove up in the end. They believe it even as the message “the inspector is a rumor,” which insinuates that proving up is just an illusion, is repeated over and over in the latter half of the opera. They continue to believe it until they ultimately lose both of their sons to the great Homestead Act, the law that drew them onto the plains of Nebraska.

By the end of the opera, the American dream is quite literally dead. There is not a moment of lightness in the opera, not a moment of reprieve. The audience members, along with the Zegners, are asked to confront their own mortality and hopeless ideals and ultimately to accept that even when they give everything, they may get less than nothing in return.