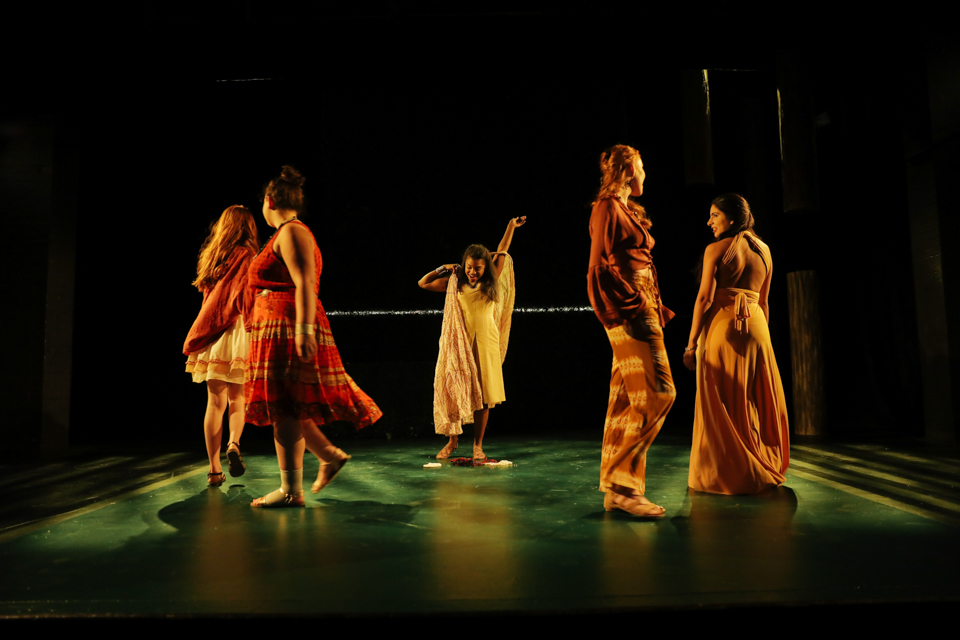 As the ensemble shifts around him, Peer Gynt, played by Angel Dudley, is lost in his own world.

While there were certainly a few setbacks in Barnard’s recent production of Peer Gynt, they were well-compensated for by a unique composite of casting decisions that broke gender expectations, unsettling of boundaries, and the brilliance of several lead actors.

From Oct. 18 to Oct. 20, the Barnard Theatre Department staged Peer Gynt by Henrik Ibsen, translated by Gerry Bamman and Irene B. Berman, in the Minor Latham Playhouse. The adapted performance was directed by professor Shannon Sindelar, with set design by Jo Winiarski and stage managing from Sarah Cook, BC ’19.

Ibsen’s work is an episodic five-act play about the life of a man called Peer Gynt who believes himself to have supernatural abilities. As the tale takes us from Peer ambitiously fantasizing in his woodland village in the Norwegian mountains to his leaving home to explore the world, the protagonist’s beliefs become his downfall as he slowly recoils into his own mind.

As her character descended into madness and the boundaries between her mind and reality blurred, the experience of watching the play became an uncanny mirror of Peer’s own spiral. One started to feel mad listening to philosophical monologues on selfhood while staring into the bared teeth of Dudley, who craftily harnessed the experiential effects of a decelerating narrative arc in the second half of the play.

Even as the narrative momentum of the play deliberately stagnated, Dudley never stopped delivering with aplomb. As the audience was dragged through Peer’s inner mind, her spectrum of facial expressions was electromagnetic and communicated the message behind her lines.

Although Bailey Coleman, BC ’19, who played Ingrid and other cameo roles, did not appear as frequently as Dudley, she made every moment onstage worthwhile. Coleman’s pinnacle performance came toward the end of the play as the Button-Moulder. Striding onstage strapped with leather pants, acting as the arrogant harbinger of Peer’s death, Coleman coldly requested Peer’s soul with an impressively apathetic voice and rod-like posture.

Yet behind her statuesque presentation, a twinkle in her eye conveyed a psychotic enjoyment behind delivering the fateful news. This clever piece of acting both distinctly dislocated Button-Moulder from the pitiful narrative of Peer and created an interiority to Coleman’s character.

Just as Coleman’s acting created a Button-Moulder independent from the play, the set design and lighting, by Winiarski and Christina Watanabe respectively, toyed with transgressing the code of theatrical and psychological boundaries.

Vertical tree trunks in troll-inhabited woods fluidly transformed into horizontal driftwood on a Mediterranean beach. Flashing of colorful lines of lights inset into the upstage wall, as the main stage lights darkened, highlighted the shifts between reality and the fantastical. The apt selection of technical moments entertained the unsettling of boundaries.

The smudging of spatial boundaries, however, would not have been possible without the adaptability of the ensemble shifting between various roles.

To only name several of their roles, Rachel Greenfeld, BC ’19, whose aptitude for onstage presence never seems to disappoint, played both a pen and the Mother of the Groom; Joel Meyers, CC ’21, transformed from the Old Man of Dover to troll king to asylum resident; and Elena Nisonoff, BC ’20, from Blacksmith to village bully of Peer and lastly to suicide victim.

It must be noted that Director Sindelar’s decision to not stage the hanging in the asylum scene, as well as refraining from visceral depiction of the wrist cutting, was sensitive and astute in light of recent events.

Another decision made by Sindelar to gender swap the dramatis personae, added nuance to characters’ relationships. This was especially evident between Dudley as Peer, and her mother, Aase, played by Lydia Georgantzi, GS ’22. Through a feminine solidarity, the mother-daughter connection was made to feel so genuine and authentic that when Aase passed away, the onstage melancholy mood became material.

Unlike the invisible materiality of Peer’s grief, Duda Penteado’s, CC ’20, portrayal of Anitra’s desire for material goods was superbly magpie-like. Nonetheless, while the greed of Anitra is certainly a characterisation that can be emphasized, the representation lacked a multi-dimensionality that disappointedly suffocated the opportunity for novel homosexual dynamics between Peer and Anitra.

Another unfortunate blot in the performance was the lack of meaningful enunciation of lines at the start of play. Possibly due to nervousness or assumed foreknowledge of the lines, it was difficult to hear the particulars of what was being declared—contrasting heavily with the rest of the play.

Along with this (very) short-lived period of muffling, the guitar instrumentals aimed to add a risky and unorthodox musical texture to Ibsen’s play, but the country-genre strums jarred with the dark intensity of the show. Despondent operatic singing from Estee Dechtman, BC ’20, however, evoked a depth of despair and tragedy that paired brilliantly with Peer’s descent into madness.

This performance of Peer Gynt was certainly not immune to flaws. Yet, gender-swapping that evoked complex relational dynamics between characters, an adaptable cast and set that unsettled spatial and identity frontiers, and an ending that made one feel like an inhabitant of the mad Peer Gynt’s mind remedied the instabilities with a fresh and unpredictable medicine.