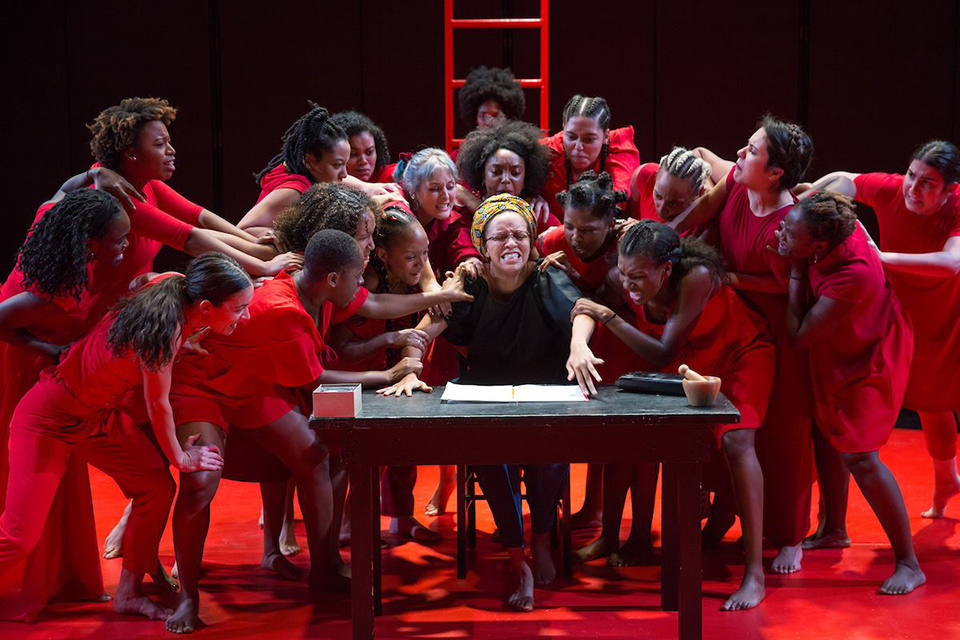 'LORDES' featured an ensemble cast of over 50 actors.

Audre Lorde is the “black, lesbian, feminist, poet, warrior, mother” that Katherine Wilkinson, MFA ’19, needed growing up and continued to be inspired by in the writing and directing of her senior thesis.

With Gethsemane Herron-Coward, MFA ’19, Wilkinson co-wrote and directed “LORDES,” her senior thesis. It is a deliberation on the life and final years of Audre Lorde, a famous New York poet, writer, activist, and librarian who died in 1992. The play sees her battling cancer, determined to finish her last poem. The production was held in the Flexible Performance Space at the Lenfest Center for the Arts, which ran from Oct. 17 to 20.

Wilkinson received a B.A. in performance studies from University of North Carolina at Chapel Hill and is currently pursuing her MFA in directing from Columbia’s School of the Arts. She has directed for over 10 years and has shown her work across the U.S. and overseas. She is the founder and producing artistic director of the Gale Theatre Company based in Austin, Texas.

With “LORDES,” Wilkinson sought to expand the bounds of theater. The production hinged on moments of intensity, like 50 women in red stomping their feet in unison or two women silently looking each other in the eye—moments of which Wilkinson was particularly proud. There was choreographed dancing, singing, and group and one-person scenes, all of which retained intimacy.

Audre Lorde, portrayed by Lauren Marissa Smith, is incredibly important to Wilkinson and her work both as a woman and a poet.

“I encountered Audre Lorde for the first time when I was 18 years old, and I was first really understanding what feminism was to me and what being gay was to me,” Wilkinson said. “‘Poetry Is Not a Luxury’ I kept in my purse for 15 years. It was crucial.”

Wilkinson’s mission, as co-writer and director, was to produce an important and relevant work.

“I wanted to do something for my thesis that would reflect the politics in the place that we are in as our world right now,” Wilkinson said. “Destabilizing heteronormativity, destabilizing white supremacy, destabilizing the patriarchy is a very big part of my mission as an artist, and creating communities that are upheld by those destabilizations.”

This destabilization is exemplified in the duality of Lorde. She endeavored between moments of defiance (“If you have the audacity to worship yourself, why can’t I?”) and moments of infant-like vulnerability (“Mother I need.”). Wilkinson wanted to do justice to the two sides of Audre Lorde.

“I think that one thing that particularly women are confined to in western drama is you're either sexy, you're either a mother, or you're Joan of Arc—you're battling something,” Wilkinson said.

This show translates vulnerability to power, with Wilkinson wanting, she said, to destabilize systems—including destabilizing the perception of women in media—and Audre Lorde within her own narrative. Wilkinson wanted to show that Lorde was “a powerhouse,” but that she also faced great hardship. She was simply a woman struggling with both terminal illness and language.

When asked what’s next for Wilkinson and this production specifically, there was no hesitation in her response.

“We would like to package the show and tour it through universities, because Audre Lorde is on every women's studies curriculum around the country,” Wilkinson said. “We're going to teach you about making new theatre; we're going to teach you about Audre Lorde, social justice, and intersectionality. [Lorde] is also offering this incredible opportunity to just look at a particular body that is never centralized in the narrative. A black lesbian is never centralized in a narrative.”

Wilkinson is dedicated to collaborating, unsettling tradition, and manifesting creativity in unorthodox ways—something she is encouraging others to do as well.