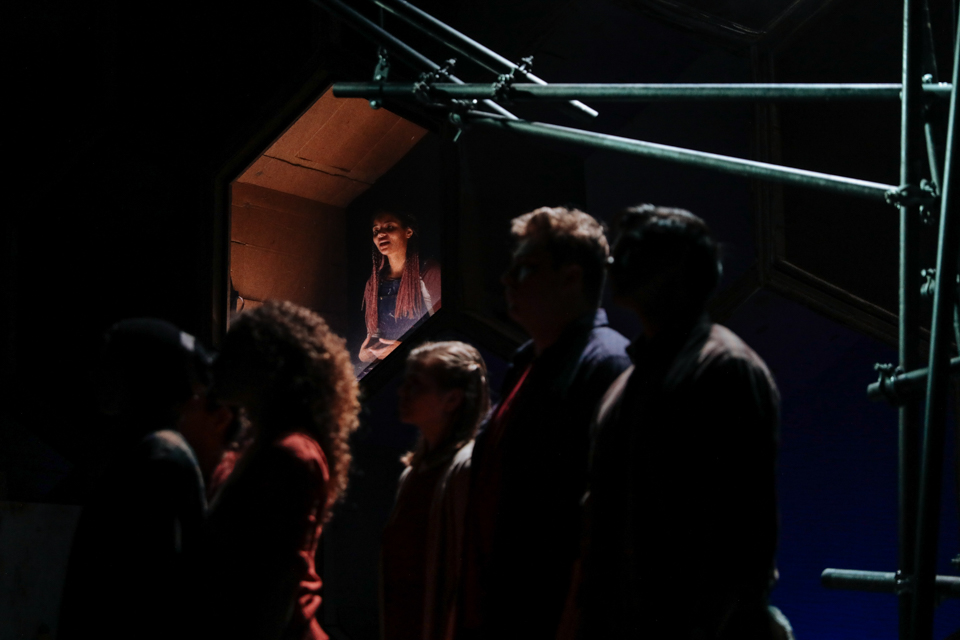 Girl, played by MoniQue Rangell-Onwuegbuzia, CC ’22, kneels inside one of the hexagons of the honeycomb structure.

Helicopter blades whir in the distance. The auditorium lights blackout. A radio blares out something about a missing person. Five flashlights turn on, beaming light directly into the eyes of the audience, piercing, searching, hunting for a perpetrator. Like hexagons of a honeycomb, disordered segments of storyline sew the narrative together.

From Dec. 6 to 8, the Barnard theatre department staged Stefanie Zadravec’s play “Colony Collapse,” featured on The 2015 Kilroys List of outstanding new plays by women. The production was directed by Lisa Rothe, former Director of Global Exchange at The Lark, and during rehearsal, Zadravec herself provided tips for the actors. Staggering technical features, including a gigantic honeycomb scaffold, uncannily realist make-up, and acutely emotive acting, made this performance raise the bar for college theatre.

“Colony Collapse” follows the mixed-up lives of residents in insular rural Oregon after a teenage girl has been abducted. In the hunt to find the snatcher and rescue the girl, families are exposed as discordant, drug addicts relapse, and society continues to crumble each day the girl is not found, mirroring the breakdown of a beehive.

The play is named after colony collapse disorder, a phenomenon occurring frequently in bee communities where the queen bee is abandoned by worker bees, causing the community to disintegrate. 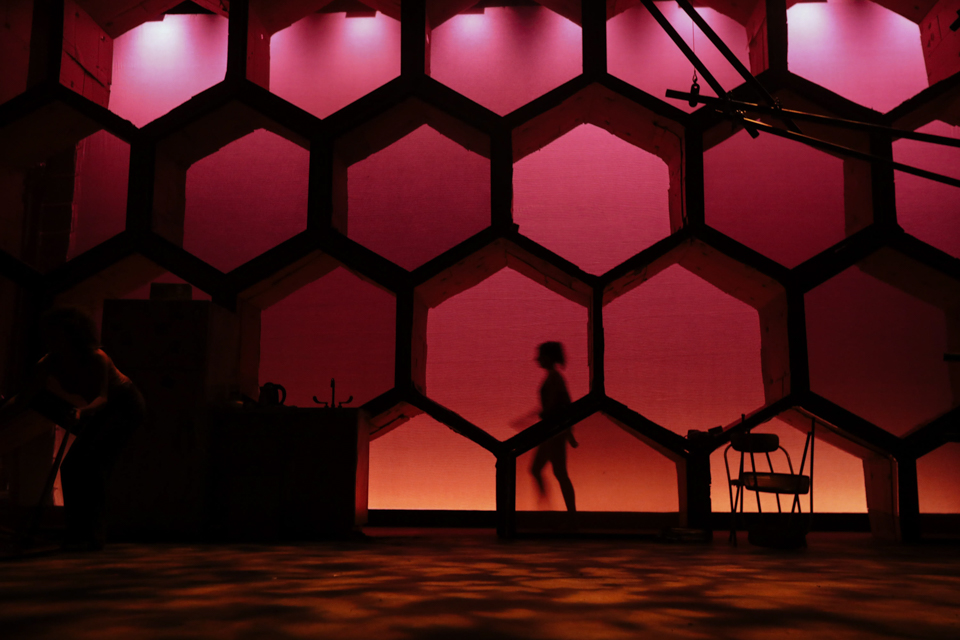 The beehive analogy materialized fantastically onstage, aided by a twenty-foot honeycomb structure that dominated upstage. The program proudly asserted it was part “100 percent recyclable steel,” part “scrap plywood” and part “reclaimed cardboard from Barnard Dining Services.” Unexpectedly, the first sighting for the audience of the lost girl, played by MoniQue Rangell-Onwuegbuzia, CC ’22, saw her curled up in one of the honeycombs, 10 feet above the stage floor, hands bound by yellow rope.

Technical details were key to the success of this production. Spheres of white light danced on the stage floor, mimetic of helicopter searchlights. When it rained in rural Oregon, buckets were placed onstage to catch leaks from the farmhouse roof. When the stoner son Jason, played by Daniel Kvoras, GS ’19, fanatically smeared dirt onto his face, the dirt stuck for the rest of the play.

Makeup and costume design also deserve acclaim simply for their intricate manifestation on Nicky, played by Nell Bailey, BC ’19. The tattoos, bruises, and cuts on the drug-addict mother were so bloodily visceral that for a split second calling 911 seemed more appropriate than appreciatory credit. 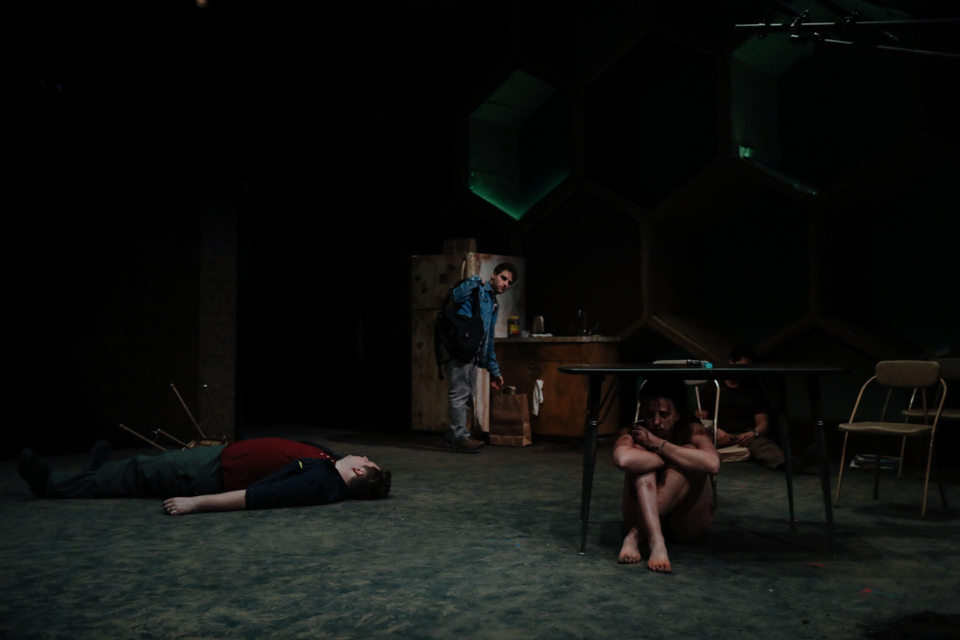 Nevertheless, without the high quality of acting and expert casting, the quality of the tech would have been redundant.

Eyes constantly twitching, Bailey mercurially flipped between aggression and temperance in an unsettling manner, all the while scratching at her arms. Her portrayal of a meth addict was astonishingly accurate.

Husband and wife Mark and Julia, played by Brian William Price, GS ’19 and Lily Whiteman, BC ’19, portrayed their recovering addict characters with such conviction that they genuinely appeared haunted by thoughts of relapse.

The other town residents, played by Adam Glusker, CC ’21, Carolyn Friedman, CC ’21, Diego Lomeli, CC ’21, Emma Smith, BC ’19, and Alexis Rangell-Onwuegbuzia, CC ’22, wafted in and out of the scenes in a ghost-like manner.

Sometimes they would deliver chilling monologues on their traumatizing personal experiences, sometimes they would stand as statues in a cemetery, silently watching the scene unfold. Twice Glusker walked into the audience, slipping out of theatrical space and unnervingly invading the rows of red-cushioned seats. Often without a line in the scene, the apparitional figures would hand over props to Julia, Mark, Jason, and Nicky. Indeed, Lomeli and Glusker even swapped one performative mask for another as they turned from sensitive, retrospective fathers to the sheriff and his henchman. Through the characters sifting nonchalantly in and out of the “Colony Collapse” universe and various personalities, intensely precarious boundaries between the real and the fictional were formed.

Unfortunately, while Price, who played Mark, was perfectly cast—his thick beard and hefty frame screamed father figure—early on in the play his acting came off as lazy during his irate moments, with predictable gestures and boring vocal tone shifts. Yet, though it took time, Price blossomed into his role by the end of the performance.

Spoiler alert for the end of the play: The lost girl is found dead. The child-snatcher is none of the characters, and the colony remains collapsed. As the final lines of the play denote, Zadravec’s narrative is not meant to offer the audience satisfaction.