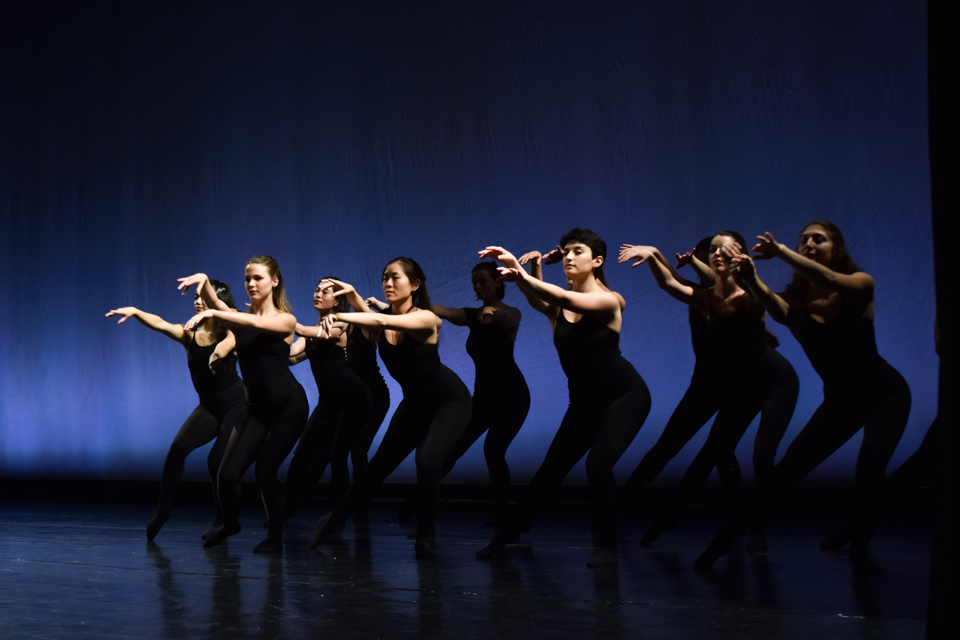 Over 140 dancers took the stage backed by the music of Bruno Mars, Sam Smith, and Ed Sheeran, among others.

In Roone Arledge Auditorium on Friday night, audience members were met with dancers draped in tie dye, sequined tops, animal onesies, and rainbow socks, to name a few. But their colorful garments were only one of the highlights of ‘Versace on the FloOrchesis,’ Orchesis’ end-of-semester performance, a show emphasizing the importance of supportive communities.

‘Versace on the FloOrchesis,’ a nod to Bruno Mars’ “Versace on the Floor,” continued Orchesis’ open-door tradition of casting every dancer who auditions for the show. Over 140 dancers performed routines—each choreographed by a different student—to either a single song or a mashup of several, consisting mostly of contemporary pop hits by singers including Sam Smith, Kehlani, and Ed Sheeran.

Upon the curtain’s lifting, family and friends of dancers began excitedly chanting the names of loved ones. In this semester’s performance, Columbia’s largest performing arts group delivered an energetic blend of dance styles in a set of 16 performances and three interludes.

The show’s first half comprised primarily of performances by less experienced dancers, categorised as open-level. Orchesis’ space coordinator and choreographer Hanna Scholze, BC ’19, explained the purpose of integrating dancers with a variety of skill levels into the ensemble.

“[Open-level pieces] are about finding [dancers’] confidence and making them feel comfortable with performing on stage,” Scholze said. “Watching them grow from learning movement, struggling and asking, ‘Which way do I turn, which way do I go?’ to being completely comfortable dancing together is really rewarding.”

The show’s first dance to a slow song, “No Easy Way Down,” choreographed by Zoe Novello, BC ’21, opened with dimmed lights, showcasing the dancers’ silhouettes engaging in wave-like movements against a blue backdrop. The dancers tumbled into each other gently at center stage in a strong finale, giving the piece a memorable ending. However, the inclusion of Carole King’s song written in the 1970s clashed with the mood and genre of the otherwise contemporary repertoire.

In between the routines, high energy interludes provided fun breaks from the sequence of dances, all performed to a selection of Bruno Mars songs including “Treasure,” “That’s What I Like,” and “Just The Way You Are.” In one particularly memorable interlude, members of the Orchesis executive and general board choreographed a comedic take on “Uptown Funk” by Mark Ronson featuring Bruno Mars, where one dancer performed the worm while wearing a lion onesie.

“Praying,” choreographed by Naava Ellenberg, BC ’21, was an emotional highlight of the show, delivering a moving execution of Kesha’s song, based on the singer’s legal battle with alleged abuser and former producer Dr. Luke. Dancers dressed in white garments responded to the song’s charged lyrics with assertive kicks and punches. At times, the ensemble lifted each other into the air, creating a palpable supportive energy that culminated in a powerful embrace before the lights dimmed.

For one of their largest numbers, “Rihanna Mashup,” choreographed by Ibby O’Carroll, CC ’21, and Kyra Schindler, BC ’20, dancers emerged on stage holding open umbrellas for their performance of “Umbrella,” by Rihanna. Though this appearance received laughter from the audience, several of the umbrellas unfortunately turned inside out upon being spun, causing a distraction from the actual performance.

Following the intermission, “Shape of Us,” choreographed by Yaël Cohen, CC ’19, delivered an expressive rendition of “Shape of You” by Ed Sheeran. Attired in denim, flannel shirts, and sunglasses, dancers playfully acted out the song’s lyrics—including pretending to drink a shot on stage——and closed by posing for a photo taken by a fellow dancer.

In “This Is Me,” choreographed by Christine Sedlack, BC ’19, performers wore a single rainbow-patterned knee length sock to accompany the song from the film “The Greatest Showman.” Dancer Carla Melaco, BC ’21, spoke about how the visually striking costume choice reflected the choreographer’s aims for the piece.

“[Christine] talked a lot about being a warrior and about being yourself, so I guess that played into it,” Melaco said. “It was super musical theatre and fun. I think it was an incarnation of her character.”

For the final performance, all 150 dancers joined the stage wearing a variety of the garments used throughout the evening. The energized dance that followed was backed by the show’s titular song, “Versace on the Floor.” This celebratory moment echoed Orchesis’ true accomplishment of the night: uniting dancers and audience members for a show as much about support as it was about dance.

Updated 11:48 p.m. December 10, 2018. This article previously mistakingly identified “No Easy Way Down” as the first dance in the show, rather than the first dance to a slow song. Spectator regrets the error.