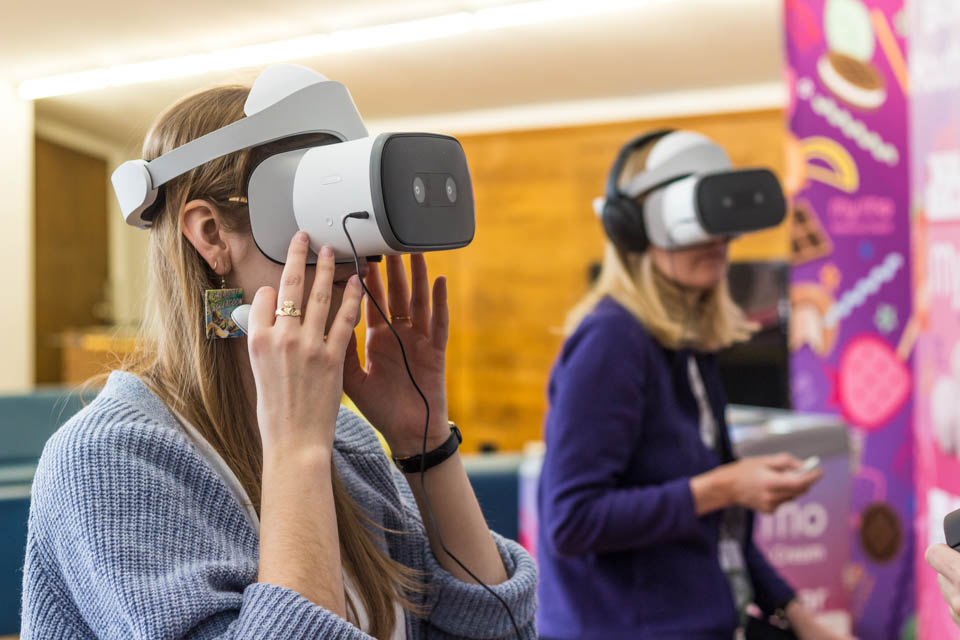 The VR Lounge at the Altschul Auditorium included five Oculus VR headsets that viewers could use to experience state-of-the-art film production techniques.

The film industry experiences an increasingly rapid technological turnover every year, a growth on par with few other industries. From new camera equipment to special effects to virtual reality, studio spaces and start-ups are promoting superior shows for the silver screen.

Barnard’s ninth annual Athena Film Festival did its part to promote new technology in film this past weekend, featuring both virtual reality professionals and technical professionals. Events dealt with the future of cinema and the necessary steps for developing filmmakers to become a part of this changing film industry.

The film industry is undergoing a tech revolution in the way films are being viewed and produced, and this new technology took center stage at Athena. On Saturday, Athena held its third annual virtual reality experience, which gave viewers a taste of where the future of film might be headed.

The VR Lounge at the Altschul Auditorium included five Oculus VR headsets that viewers could use to experience state-of-the-art film production techniques. Through a sponsorship with Google, the event allowed viewers to experience two short documentaries focused on powerful women in leadership roles on the battlefield. For these documentaries, the use of VR technology helped tell groundbreaking stories about the struggle for women’s empowerment at home and abroad.

One of the two documentaries was “She Flies By Her Own Wings,” a nine-minute short created by Jesse Ayala, which followed the story of Shannon Scott, a proud transgender veteran. In an immersive three-dimensional experience, viewers are placed directly beside Scott, who is seeking justice for the vets who championed equality before her in the wake of Donald Trump’s military ban on transgender soldiers. The video includes striking clips of committee chambers, offices in congress, monuments in Washington, and a moving experience at Washington’s congressional cemetery.

The second film featured was The Sun Ladies, a documentary created by Celine Tricart and which features Xate Singali and her female-only fighting unit that risks everything to protect the Yazidi community from ISIS attacks at the Iraqi border. Formerly featured at the Sundance Film Festival, Tricart and her film are among the first to enter the growing virtual reality film industry.

Altogether, the VR Lounge at Athena allowed festival-goers to take a peek into the future of filmmaking. Virtual reality technology in film is currently in its infancy, but as filmmakers and producers push the boundaries of what is possible, viewers could be treated to more immersive experiences in the future. With these films, the VR Lounge at Athena hinted at a bright future for film in virtual reality.

Also on Saturday, the festival held a forum about the technology of filmmaking, granting festival-goers unsurpassed access to professional filmmakers and their insights into production.

The event was co-hosted by the Barnard Media Center and split into two sections, led by cinematographer Nara Garber, SoA ’98, and director-editor Shruti Ganguly, respectively.

Garber began her career in film with Columbia’s master in fine arts program. In her half of the forum, she discussed the quality of resources available at Barnard, the pitfalls of the evolution of technology, and self-development within the industry.

“I'm really impressed by the facilities here and by the accessibility of the equipment. I think it is thrilling that Barnard has [these facilities] and that you as members of the Barnard community have access to these resources,” Garber said. “The fact that you actually have decent cameras on which professional work is being done available here with editing systems, I would say if you have any interest, if you think you might want to make a serious film two years down the road, just start shooting short films now.”

Addressing some hesitations that arise from tech in the trade, Garber spoke more generally about the ever-advancing technology involved in filming.

“The technology changes so quickly. If you said ‘I have $6,000, I'm going to buy the best thing that I could buy for $6,000 today’—and then you didn't do anything because you're still writing for a year from now—‘Shoot, I should have waited a year and then I could have bought this camera!’ It's like computers. Anything in a digital world is going to change,” Garber said.

Ganguly took over the second half with descriptions of her editing process, discussing different examples of how editing can influence the tone and final feel of a film. She advocated for the control that editing could grant a filmmaker, and articulated how unconventional the process could be.

“When you are an editor and you’re working backwards, it's almost like you’re deciding what the [film] looks like. You get to put the pieces together, which is quite interesting and it even helps you make choices when you're figuring out what are your shots, what are the inserts you need to take, and what should you do,” Ganguly said.

Both Garber and Ganguly directed those interested in getting involved with filmmaking to numerous resources in the city, particularly the non-profit New York Women in Film & Television and The Black List, a website where screenwriters can network.

The common thread that tied the forums together was an encouragement to start filmmaking as soon as possible.

“If there's one thing I truly believe is that when it comes to filmmaking, it’s that you learn by doing. And I would just encourage everybody, if you're interested in film, start by shooting on your iPhone,” Garber said.