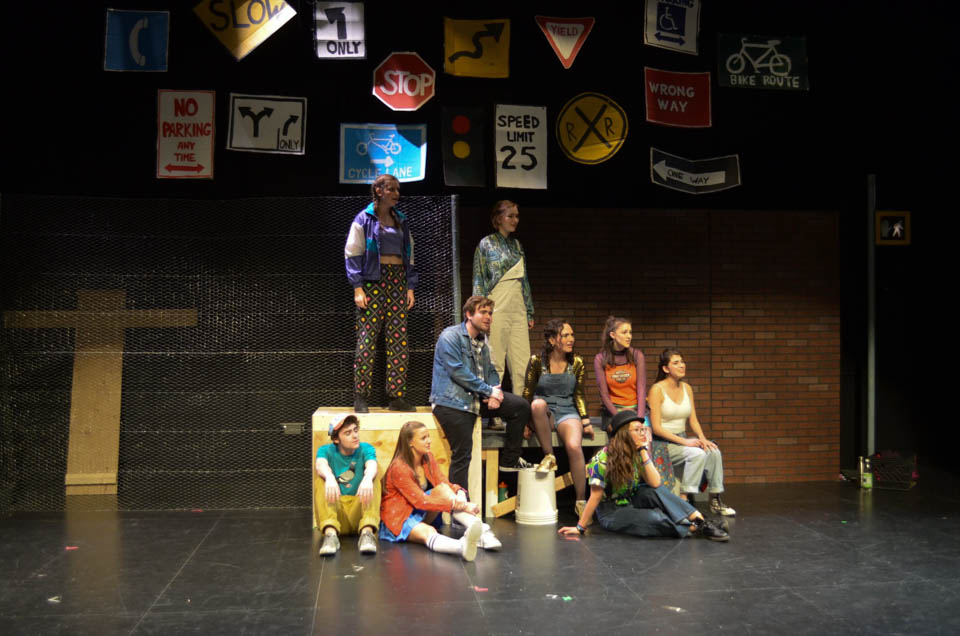 A minimal set of painted road signs, movable steps, and wooden platforms was supplemented by crates of props and actors’ water bottles distributed around the theater.

Prepare ye the way of Godspell! Song by song, parable by parable—oh dear lord, the things they played. With students, parents, and God as their witness, the cast and crew of Columbia Musical Theatre Society’s “Godspell” took the Glicker-Milstein Theatre by storm last weekend.

Stephen Schwartz made his compositional debut with Godspell’s off-Broadway opening in the spring of 1971. The show, made up of series of parables from the Gospel of Matthew, was written by John-Michael Tebelak as his master’s thesis at Carnegie Mellon University. CMTS’ Godspell was directed by Hope Johnson, BC ’21, and produced by Nakiri Gallagher-Cave, CC ’21. With five sophomores on the creative team and a 10-person cast featuring five first-year students, the performance was surrounded by a marked youthful and collaborative spirit.

Eight cast members played themselves in the show, disciples to the narratives of Jesus, played by Jacob Iglitzin, CC ’19, and John/Judas, played by Wesley Schmidt, CC ’22. The 10 actors remained on stage and in character for the duration of the production, dressed in an array of colorful and eclectic costumes. A minimal set of painted road signs, movable steps, and wooden platforms was supplemented by crates of props and actors’ water bottles distributed around the theater.

The quality in CMTS’ Godspell came through the musical numbers, which boasted remarkably strong vocals from all 10 actors. The show was carried by dynamic ensemble arrangements, interspersed with gentler and more thoughtful ballads. All aspects of the cast’s vocal abilities were tested in a score that ranged in genre from traditional gospel hymns to vaudeville, and folk to pop.

“Day by Day” is perhaps the most well-known piece from the musical, with the original off-Broadway cast record spending 14 weeks on the Billboard Hot 100 in 1972. Stephanie Leibowitz, BC ’22, sang stunning lead vocals on the song in her first CMTS appearance.

With movement choreographed by Lydia Paris, BC ’21, “Day by Day” continued into an ensemble number that was executed with both precision and energy. Other choreographed highlights included Jesus and John/Judas’ energetic “All for the Best” duet and the company’s work on “Bless the Lord,” led by Genevieve Joers, CC ’20.

Godspell in its original form includes a variety of moments for cast members to ad-lib and interact with the audience. The Glicker-Milstein Theatre provided room for various forms of actor interaction with the audience, including musical numbers which took place in the aisles. The characters invited an audience member to the stage three times in order to interact with the cast in the telling of parables. One audience member was even asked to take a turn in a game of pictionary to sketch Matthew 5:40—“If a man sues you for his shirt, give him your coat as well.”

A more satirical moment took place in the parable preceding “Learn Your Lessons Well,” which tells the story of a rich man, played by Sarah Hilligoss, BC ’21, dying and going to Hades for his life of greed. Hilligoss played the part with an exaggerated accent of President Donald Trump, exclaiming “ya fired!” in the midst of his descent and a cry of disgust as he compared the fiery conditions of hell to that of a Hilton Hotel.

The second half of Godspell worked its way toward the Last Supper and the Crucifiction of Christ, both of which carry with them an unavoidable and rather blunt change in atmosphere from the poppy, light air in the rest of the score. As Jesus lay tied to the wooden cross, multiple audience members could be seen covering their eyes or averting their gaze. The show finishes with the death of Christ and, in this production, the collapsed bodies of the ensemble scattered around the stage.

Godspell, in its essence, is a show about love and a persistent search for life’s fulfillment. In practice, the show is a collection of powerful, enthusiastic scenes warning audience members of the temptations found in everyday life. The cast and crew of CMTS’ production harnessed the theatrical talents of their team to deliver a creative take on these scenes and the iconic musical behind them.