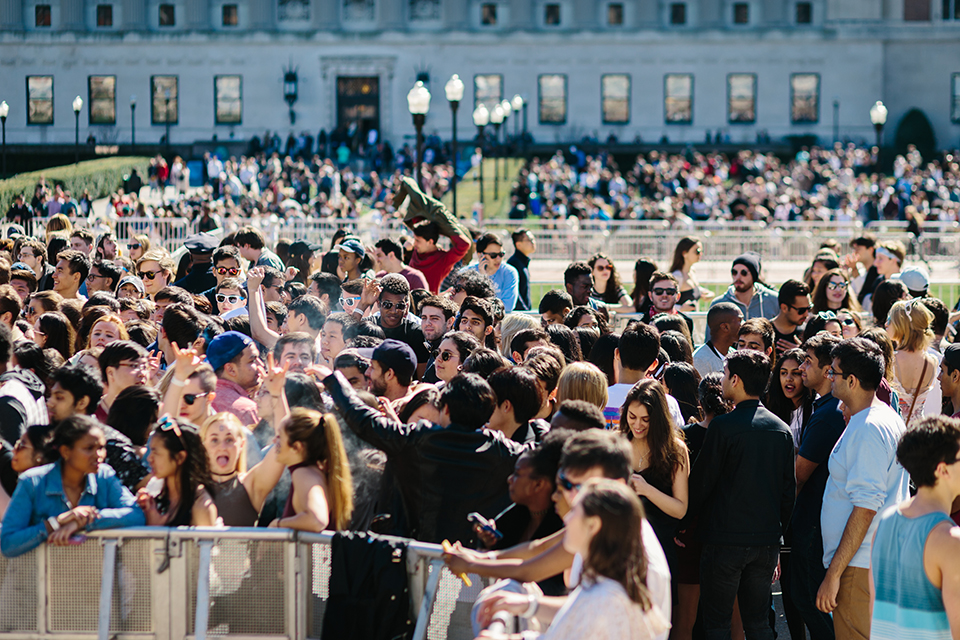 The Bacchanal Committee revealed that its previous announcement that the upcoming concert still did not have a confirmed headliner due to contract violations was a prank in a Facebook and Instagram livestream Q&A on Friday night.

The aim of the livestream was to answer questions following Monday’s press conference, during which the original announcement was made. Near the end of the livestream, the Committee addressed the claim that it was all a “publicity stunt” to increase attendance at next Saturday’s concert by instead describing it as “a prank.”

“This was not a publicity stunt. … We are confronted with a campus culture whereby people will trash [and] drag … the Columbia Bacchanal Committee for months at a time, show up to the concert, have a great time, and then go back to dragging us the next day, ” Bacchanal co-president Vanessa Chadehumbe, CC ’19, said. “What this was was a prank.”

According to members of the Committee, the prank was played because they’d grown tired of “being the butt of jokes” and decided “to tell some jokes” themselves. They also said that they wanted to “shake up the spring semester,” that it was “good-hearted fun,” and that the theme is “Fyre festival inspired.”

The Committee went on to apologize to Barstool Columbia for “implicating them on a legal level,” since the team appointed to carry out the prank ended up using the contract violation ploy and misinterpreted what the Committee originally had in mind.

“We had many versions of the prank and as we were fine-tuning things, we decided that talking about violated contracts was not the way to go,” Chadehumbe said. “However, the people making and architecting this prank were not the press team. They were brought in at the last leg of things and there was a miscommunication as to which version of the prank we would be proceeding with.”

Chadehumbe did not specify during the livestream who was involved in this “team.”

The Monday announcement was made hours before Barnard’s Student Government Association voted to grant a portion of a $6,000 request made by Columbia College Student Council Vice President of Finance Adam Resheff, CC ’19. At SGA’s meeting that night, Resheff explained that the additional funds came as a result of the Committee’s need to rescind an offer made toward a potential headliner who made derogatory comments toward the LGBTQ community.

The Committee declined to comment as to whether or not there actually was an artist whose offer was rescinded as a result of derogatory remarks.

SGA president Nicola Kirkpatrick, BC ’19, told Spectator that SGA’s leadership was aware that Bacchanal was pranking the student body before SGA voted to allocate a portion of an additional $6,000 toward the event.

“SGA actually did know it was a prank. … We knew Bacchanal would happen regardless. … It’s still a highly attended event, and 21 percent of those attending are Barnard students. I knew it was a prank before I gave the motion,” Kirkpatrick said.

She emphasized that SGA’s vote was based on the proportion of Barnard students who attended the event, not on how the Committee chose to announce the headliner.

The Committee also made it clear that there always was a headliner, and the artist will be revealed on Sunday, March 31.

“We are going for genre diversity, gender diversity, racial diversity, more so than this campus has ever seen. This is arguably the most iconic Bacchanal of all time,” Chadehumbe said.

According to members of the Committee, it’ll be the first all-woman lineup and will feature the first trans headliner. They added that the choice to announce the headliner this Sunday was a nod to the conclusion of Women’s History Month.

“One more hint about this year’s headliner: This will be Columbia’s first trans headliner,” Chadehumbe said. “Grammy-nominated,” Ingram added.

The Committee will be issuing a formal statement soon addressing the livestream’s reveal and including additional details.

Correction: A previous version of this article misquoted a statement from Bacchanal co-president Vanessa Chadehumbe regarding the press conference. Spectator regrets the error.