No room for a single reality in NOMADS’ ‘Imperson All’

No room for a single reality in NOMADS’ ‘Imperson All’ 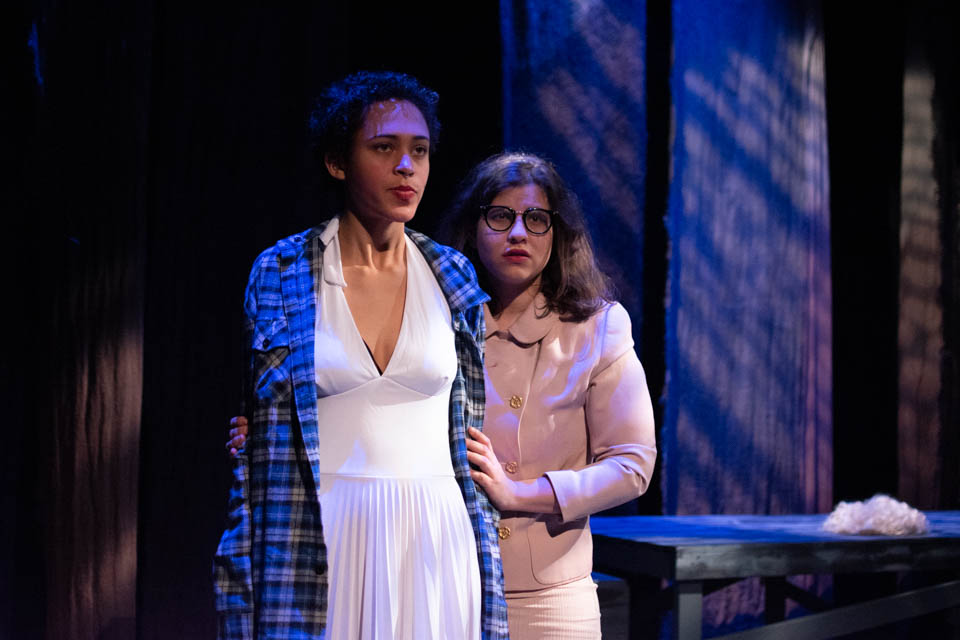 “Imperson All” was a coming of age crossover between “Stranger Things” and “Scream Queens.”

A grinning mask of President John F. Kennedy faced the audience as a disheveled Jackie O and Marilyn Monroe bowed, hand-in-hand with a bloodied man. Behind them, a chicken wire deer carcass lay with tissue paper entrails spilled across the stage.

This was the scene behind the audience’s applause. Other features of the scene included a dented frying pan, a large wrench, and a multilevel wooden dock on which most of the student-written play had taken place.

NOMADS’ spring production, “Imperson All,” took place from March 28 to 30 in the Glicker-Milstein Theatre and featured the work of three actors and a 19-person production crew, which included a “deer specialist” and “fight choreographer.” The play’s writer, AJ McDougall, CC ’21, developed her piece through NOMADS’ annual reading workshop, “Wordplay.” It was testament to the power of collaboration and a thoughtfully executed commentary on growing from and out of our inner conflicts.

Director Abigail Smith, BC ’21, explained that, after assisting with the show’s casting, McDougall took a step back, which allowed the production team to develop a unique perspective for the play’s premiere.

It was clear that each inch of the set and each speckle of light had been intentionally constructed to create a believable environment for the audience. McDougall would stop by rehearsals occasionally to give feedback to designers and crew members, but ultimately the show was in the hands of Smith and the rest of the crew.

With haunting mysteries, midwestern towns, and even more mysterious characters, “Imperson All” was a coming of age crossover between “Stranger Things” and “Scream Queens.”

The one-act play took place outside a raucous Halloween party hosted by Clementine Fish, played by Daisy Mayer, BC ’22. Clementine leaves the house party and finds Marley Meyer, played by Cecelia Morrow, CC ’21, sitting by the nearby lake. Remarking on their choice of halloween costumes—Clementine as a bloody Jacqueline Kennedy, Marley as Marilyn Monroe in her iconic white dress—the two slightly intoxicated women begin to talk.

Mayer and Morrow had to work hard to gain the trust and focus of the audience. At first, most lines were delivered without context or detail. Gradually, the audience learns about the histories, dreams, and fears of Clementine and Marley, including their past romantic relationship.

Marley had recently broken up with Clementine, who was now desperate to find out the reason why. Throughout the conversation, Marley kept her cards close, acting with a confidence and poise that deceived not only the audience but also Clementine, and perhaps even Marley herself.

The conversation then turns to two unsolved murders in the town that had left the residents wondering if there was a serial killer on the loose.

All the while, muffled but recognizable pop songs blare from the nearby halloween party, and dim lighting above the stage intensifies an already tense discussion. Their conflicting and potentially incompatible personalities were matched by a persistent and electric chemistry.

The play then begins to spiral further and further from a plotline, as Clementine starts to describe her interaction with a deer carcass which had come ashore. In tandem, Marley starts to mention her recurring hallucinations. At this point, a silent moment of respite was cut off by a frying pan suddenly thrown from offstage. A greasy, flannel-clad man then entered the stage area, the play’s final and third character, Noah Hopkins, played by Mario Garcia, CC ’21.

The man’s entrance was sudden and frightening, sparking a second wind for any audience members fading after an hour of draining conversation. Garcia’s portrayal of the unsettling character was necessarily exaggerated. His unexpected and misplaced smiles turned to snarls without notice, brilliantly twisting the laughter of the audience into grimaces and gasps. As Hopkins taunted the women, it became clear that he could be the mystery murderer. After leaving the stage momentarily, he returned wearing an uncanny mask of JFK. What proceeded was a physical, and in part emotional, battle to rid the man from the stage that demanded both strength and cunning from the two women, including hitting Hopkins with the frying pan.

“Imperson All” was, at its core, a metaphor for the coming of age and the ownership over oneself as an individual, without hesitation or reserve. Over the course of just 90 minutes, the two women discover, recover, and work to defeat demons that had previously held them back from each other.

The ambiguity and absurdity of Noah’s character leaves one questioning whether he was real at all or simply a personification of Marley and Clementine’s struggle to reconcile their relationship.

There were a handful of lines, sighs, and charged silences that were frightfully predictable. But there was a certain brilliance in these clichés. They were, as the characters learned to be, unapologetic in their existence.

“Theater can be beautiful, and theater can be simple,” Smith said in an interview with Spectator. “[Imperson All] is about finding ourselves in the little conversations and interpersonal moments and about how we create our own notions of reality.”

Editor’s Note: AJ McDougall is a staff writer for The Eye, Spectator’s long-form magazine. She has no personal connection to the author.