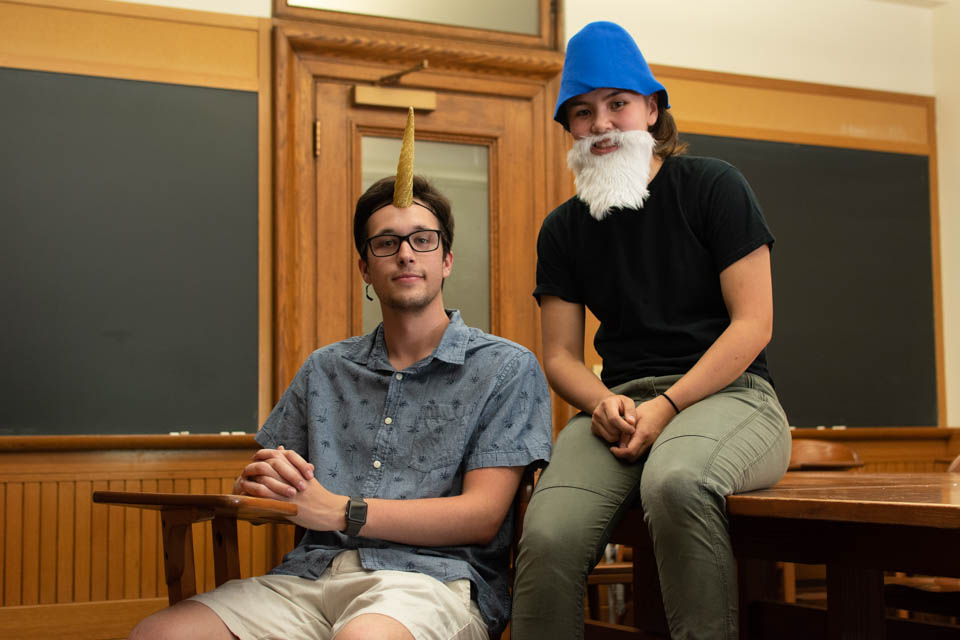 Move over Game of Thrones, a new binge-worthy TV show has hit the air. Brought to life by members of the undergraduate community, Quarter-Corn is about a few partially magical college students.

The mockumentary-style web series tells the story of Dave and Donk, two magical creatures navigating the complex world of friendships, clubs, and academics in a typical American undergraduate college. Dylan Dameron, CC ’20 and Avery Park, SEAS ’20 star as college students, one of whom (Dave) self-identifies as “one-quarter unicorn” based on his heritage, and the other (Donk) who identifies as a garden gnome.

The web series plays like a traditional mockumentary (think The Office or Borat) where characters alternate between short dialogue directly with the camera and “unscripted” moments meant to seem candid.

In their pilot episode, Dave and Donk introduce themselves as the president and vice-president, respectively, of their undergraduate social club, the Magical Individuals League of the Future (or M.I.L.F). Sadly, the two are the only magical creatures on their dorm floor, and the M.I.L.F. is their intended ticket to interacting with the larger campus community. Much of their time is spent concocting new plans to intermingle with their human classmates, and their struggle to fit in reflects the show’s larger themes of friendship, identity, and leadership.

The pilot episode was a notable film at Columbia Undergraduate Film Production’s Film Festival in the spring of 2018. Since its debut, the show has grown into a sprawling project commanded by Dameron to include a growing cast of actors, filmmakers, and producers. This semester marks the release of Season 1, with more episodes planned for the near future.

“The ‘Quarter-Corn Universe’ has expanded exponentially,” Dameron said of their growth since their debut short film, “Our first crew was actually pretty bare. And what is interesting is that the cast expands quite a bit in Season 2 as the show progresses.”

The content of the show strikes a unique balance of written material and improvisation. Though many of the episodes were written months before shooting, Dameron notes that some of the show’s best content was produced minutes before filming.

“The storylines are written out, but we took a lot of inspiration from The Office where Steve Carrell adlibs his own lines,” Park said.

“Some of Avery’s best lines are actually made up on the spot,” Dameron added.

So far, the series has released four episodes and will release their fifth and sixth episode very soon. Reception to the series has been generally positive with over 1,500 views on their first episode and approximately 3,000 views between the Quarter-Corn Facebook page and their Youtube playlist.

Regarding views, Dameron mentioned that he would be happy with whatever reception the show got.

“As long as it’s above 10, I told myself I’d be happy with releasing it,” Dameron said. “We had so much fun making the first one, I think we all acknowledged that we just had to make more.”

“STEM is very different than film, but the projects are so much fun,” Park said, “It’s definitely intense on weekends where we film 8 a.m. to 8 p.m., but I really appreciate it as a chance to not be studying.”

Dameron, however, is a traditional film and media studies undergraduate with aspirations to write for major television productions. In his view, his studies in the film department have helped in producing Quarter-Corn and his other projects.

“I think studying film has actually helped me be more cognizant about being a better writer and really paying attention to what’s on the page, even though some episodes of Quarter-Corn were re-written literally the night before filming,” Dameron said.

In addition, Quarter-Corn was produced with help from advanced technological resources available to film students on campus. The Barnard Instructional Media and Technology Services facility, located on the second floor of the Milstein Center, played an enormous role in facilitating equipment and other essentials for the production of Quarter-Corn.

“IMATS is an amazing resource to have. They are a dream come true in terms of equipment. We rented tons of equipment from them: lights, shoulder mounts, all kinds of things,” Dameron said.

Season 2 of Quarter-Corn is planned for production, but the direction of the show is up in the air. Park and Dameron have noted that after the season finale of Season 1, the door is open to reimagining where the show is headed.

To the other STEM students of Columbia debating between pursuing their hobbies or finishing their homework, Park has some advice.

“Take time to do something that you find fun! It makes sitting down to do that thermodynamics homework worth it,” she said.