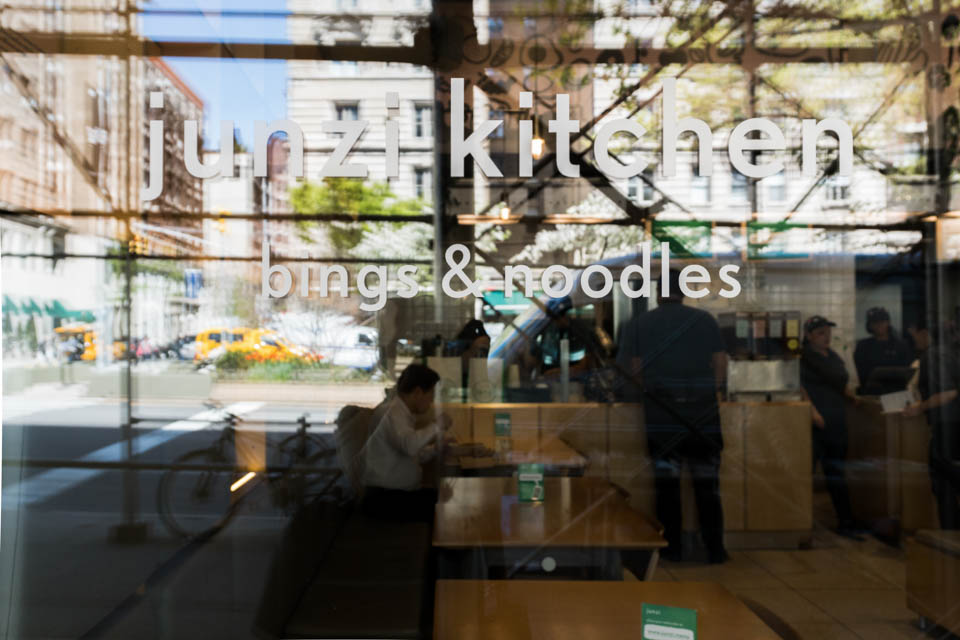 The dinner series held exclusively at Junzi’s Morningside Heights location is dedicated to expanding the narrative of Chinese cuisine.

Despite being only 16 at the time, Lucas Sin and a group of friends decided to start a restaurant in Hong Kong called “Claypot.” A few years down the line, his passion for cooking stayed with him as he pursued a cognitive science degree at Yale. In addition to working at food pop-ups around New Haven, he held one in his dorm called Y Pop-up. While on summer and winter breaks, he would cook at “super fancy places” in Japan. These experiences in pop-ups and fine dining exposed chef Lucas Sin of Junzi Kitchen to Chef’s Table-style cooking, and eventually led to the birth of the Junzi Chef’s Table dinner series—Junzi’s best-kept semisecret.

Started in 2016 as a personal project of Sin’s, the intimate dinner event is held monthly on three consecutive nights, during which a five- to seven-course meal is served to 18 guests each night. Centered around a “one-time-only” theme, the dinner series held exclusively at Junzi’s Morningside Heights location is dedicated to expanding the narrative of Chinese cuisine.

In conceiving Chef’s Table, Sin set out to diversify the prevalent story of Chinese food in the United States in order to broaden public perception of it.

“There are 46,000 Chinese restaurants in the U.S., according to our research. That’s more [than] Burger King, McDonald’s, [and] KFC combined, obviously. However, all of them seem to serve a very single type of Chinese food: the Southern Chinese Cantonese style cooking like wok frying, deep frying, cornstarch-based sauces, using soy sauce to stir fry,” Sin said. “What Junzi is trying to do, broadly speaking, Chef’s Table and otherwise, is to show people the other parts where we can source interesting ideas from, when we’re cooking Chinese food.”

Each Chef’s Table dinner sees Sin and a team of collaborators delve deep into a chosen historical or cultural topic in a bid to reveal its connection to Chinese cuisine.

“We just dive into this topic that nobody really cares about. But, everybody ends up thinking it’s really, really interesting just because it’s about deep study. … Historical, sociological, or just aesthetic understanding of Chinese food in a very specific realm,” Sin said.

Over the course of its existence, the series has explored multiple topics including immigration through the lens of Chinese-Dominican cuisine, interactions of Chinese food with painting, and the relationship between Chinese and Italian food, inspired by Italian missionaries’ trips to China in the 14th century. Yet, one particular topic explored in April 2018 entitled “Strange Delicacies of Combined Flavors” has come to embody one of the main goals of Chef’s Table. The recipes for the dishes served at this dinner, including the roast duck dish, were obtained from a book entitled “Important Principles of Food and Drink” written in the 1330s by a pharmacist from modern-day Turkey.

“[The roast duck] kind of quickly became our Chef’s Table signature dish because it tells that story of what Junzi is trying to do is tell you: Chinese food is not what you expect. And, this is exactly what that does, because it’s the like most iconic Chinese dish but didn’t come [from Chinese culture].” Sin Said.

Regarding the process of selecting topics and themes, Sin credits his employees with bringing ideas to the table.

“It always starts with the person you’re working with so they come up with an idea and then you try to feed [it] into the mission of Junzi, which is to look at Chinese food,” Sin said.

In curating the dinner events, Sin and his team work with a plethora of talent including artists, chefs, experts in the food industry, historians, and others. While the artists are responsible for creative illustrations on menus, the historians, chefs, and other food experts collaborate with Sin to bring menus to life.

A case in point is the menu for a December 2018 edition entitled “Spices Along the Silk Road,” which was built by Sin, Museum of Food and Drink executive chef John Hutt, and a spice supplier from spice sourcing company Burlap & Barrel. The variety of the collaborators buttresses Sin’s point about the infinite potential of storytelling through Chinese cuisine.

“It’s so cool to work with diverse experts in their field—whether experts in their personal narrative or experts in a specific type of cooking, whatever it is—because it goes to show that our hypothesis, so far, is true; that Chinese food can be interesting to literally anybody if you dig deep and take yourself way too seriously,” Sin said.

The award-winning chef and his team pay particular attention to detail—they sometimes use little accessories to tell great stories. Motivated by a trip to Sichuan, Sin brought Sichuan food front and center at a February 2018 dinner themed RED. According to Sin, one of the biggest misconceptions about Sichuan food is that “it’s always red and always spicy.” He disputes the latter assumption and interestingly used a bouquet of chili peppers to subvert the popular narrative about Sichuan food. Although the pork dish that was being served was Sichuan food, it had no chili pepper; the only chili pepper on the table was the bouquet. Sin explains that such little elements are purposeful.

“It’s important that all the little details sum toward two things: One is always to extend the narrative and tell that story better, and b, it’s all about hospitality, making sure people feel comfortable and that the food is good,” Sin said.

The idea behind Junzi’s Chef’s Table series is to show that when telling stories through Chinese food, the possibilities are endless.

“My greater hypothesis is that if you combine Chinese culinary ideas with actually anything else in the world, and you dig into that topic, something interesting will happen and you can make a five- to seven-course menu that tells that story.”