In KCST’s ‘Romeo and Juliet’ the earth groans, the birds chirp, and moments of fate beatify

In KCST’s ‘Romeo and Juliet’ the earth groans, the birds chirp, and moments of fate beatify 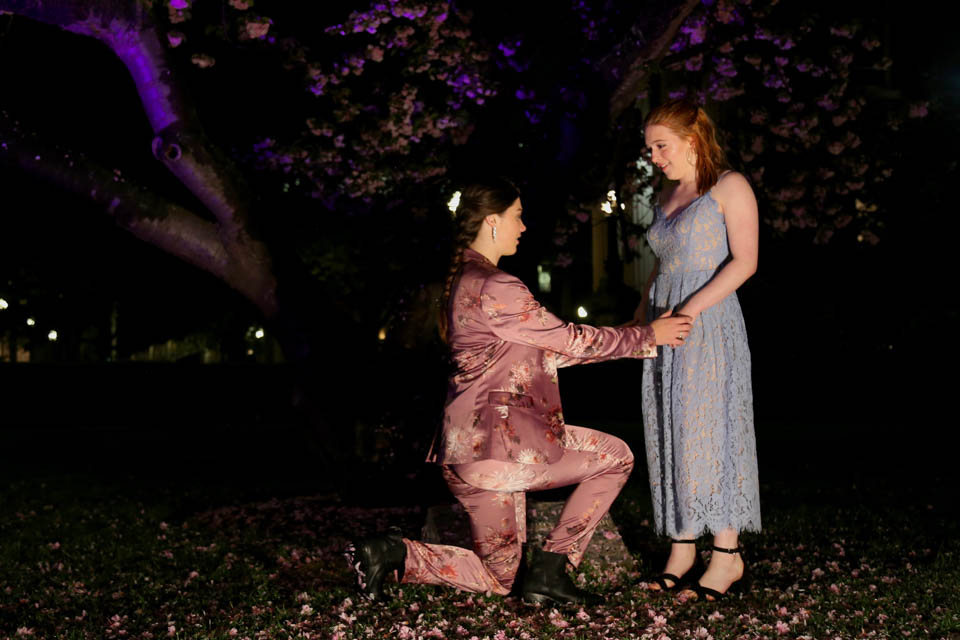 The Shakespearean tragedy was performed all around Columbia's campus.

As Mercutio took his last breath, lightning lit up the dome of Low Library and thunder boomed in the sky.

Pathetic fallacy took this production of “Romeo and Juliet” to a whole new level. Each romantic embrace came with kisses of rain for the star-crossed lovers and, as was the fate of the universe, every death was preceded by snaps of thunder.

With a huge team of students behind the show, King’s Crown Shakespeare Troupe’s spring production of “Romeo and Juliet” took place over the weekend from May 3 to 5 and, while the weather seemed like a powerful adversary, the students made sure the show went on. Directed by Asya Sagnak, BC ’19, and produced by Tina Simpson, BC ’19, this Shakespearean tragedy was performed all around Columbia's campus, starting on the steps of Low and finishing outside of Schermerhorn. Although the show took its time, the genius cameos and fated timing of some divine power crowned the production.

Unlike previous years, the troupe chose to use more lawns this semester—and trees. During Act 2 Scene II, Romeo, played by Bailey Coleman, BC ’19, and Juliet, played by Erin Hilgartner, CC ’21, cutely chased each other around the cherry blossom tree outside Earl Hall. One would not have thought the scene could have gotten more squeamishly lovey-dovey until a magical snowfall of cherry blossoms floated down in the midst of a true love’s kiss.

Coleman’s performance had a slow start. Perhaps due to the monsoon wailing through Low Plaza, her first several scenes lacked the charisma that she had in KCST’s “Hamlet.” But after Hilgartner’s entrance, the natural ebb and flow between the couple seemed to redirect Coleman back on track. The subtle and cheeky smirks the hapless Coleman offered to the crowd as she came striding through the audience—adorned with a flowery, silky pink suit—substituted the touch-and-go actor of the show’s beginning.

To pick the rose and thorn of Hilgartner’s performance, the rose bloomed from her acting during Juliet’s rebellious moments and her thorn came from a certain lackadaisical energy. When Juliet spited Paris, played by Lily Whiteman, BC ’19, rejecting his advances, one of the Mean Girls cast appeared outside St. Paul’s—and angsty Juliet was here to stay. Hilgartner’s stubborn tenacity during her face-to-face confrontations with father Lord Capulet, played by Joel Meyers, CC ’21, truly highlighted the defiance of the couple’s love.

But, these moments came minutes before Juliet’s fake suicide and, whether it was a choice to act the passive damsel or not, Hilgartner’s stage energy was lacking in scenes with her Capulet family. 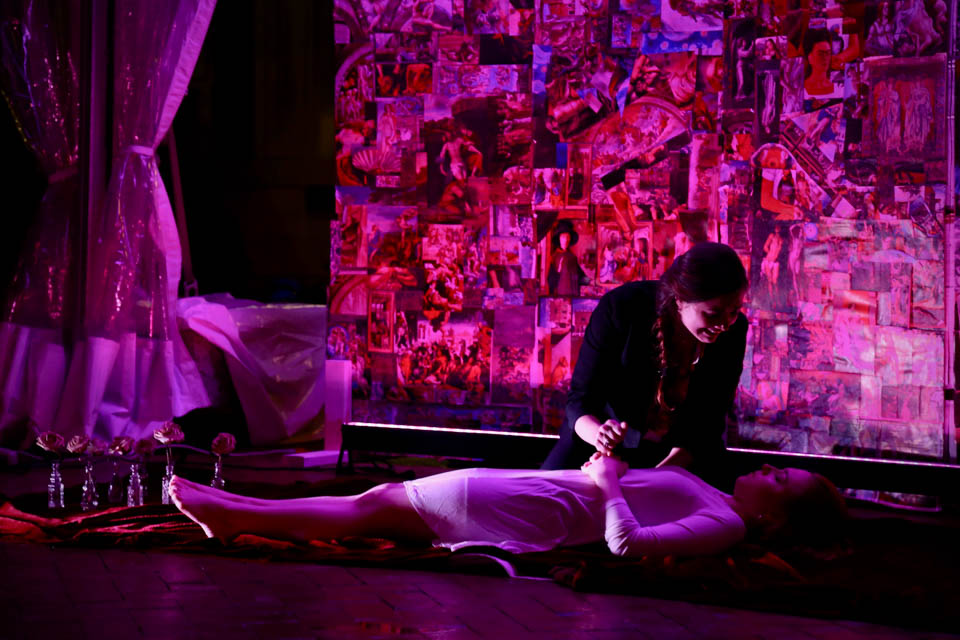 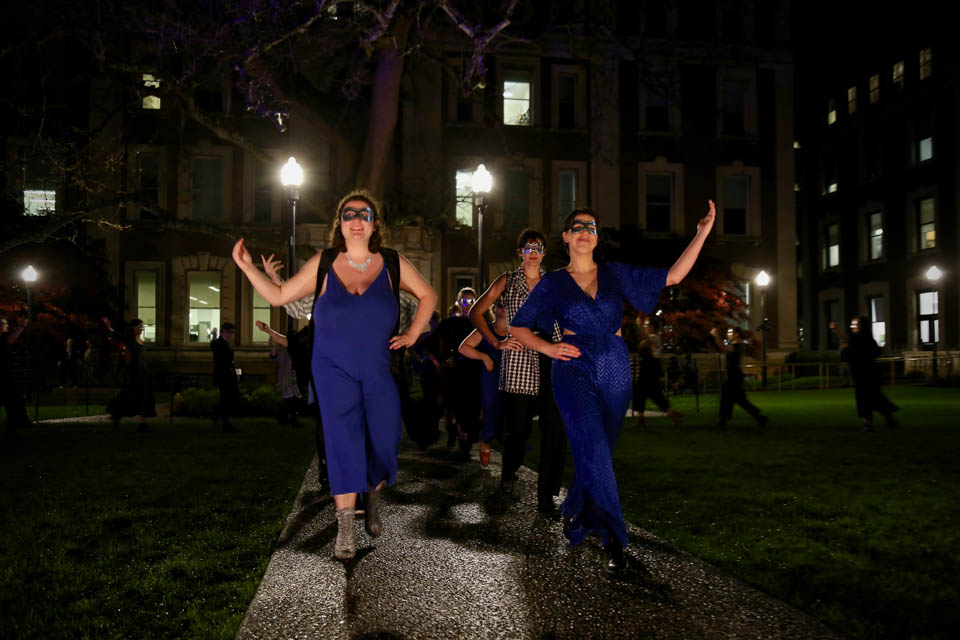 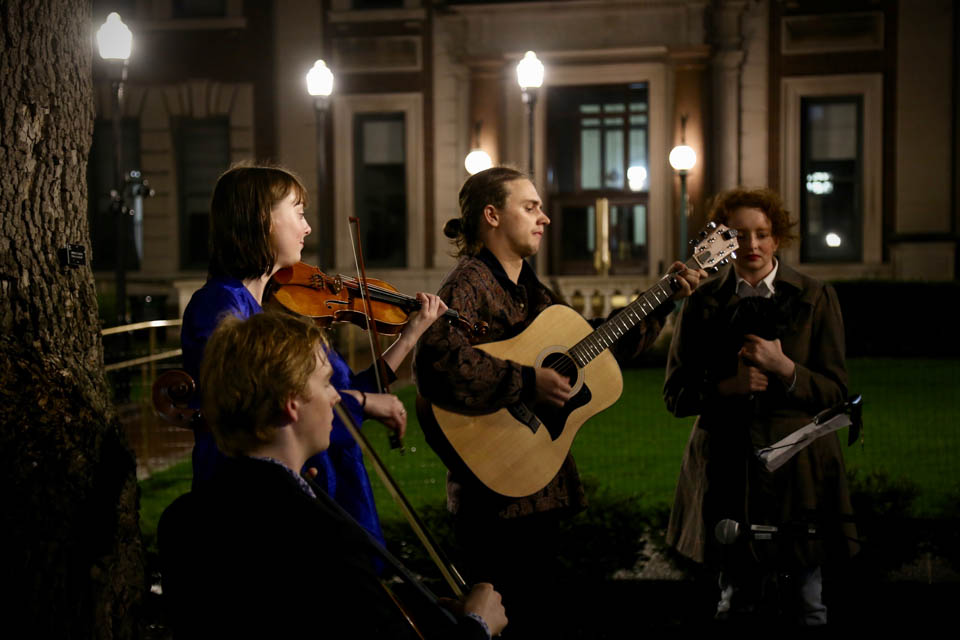 One character from the Capulet ensemble, the flamboyant Nurse, played by Rose Meriam, CC ’19, was a special part of this production. Dressed in an Audrey Hepburn-esque headscarf and sunglasses, her peekaboo appearances and breadth of facial expressions kept the performance on its toes.

During one pep talk scene between Juliet and her Nurse, set at the bottom of Low Steps, Meriam squinted her eyes, screwed up her face, and wriggled her nose in a fashion that could only be described as masterful.

Another enjoyable figure was Friar Laurence, played by Jack Becker, CC ’21. As Romeo revealed his clandestine love to the Friar, Becker picked a leaf from a nearby bush on the west side of Low, sniffed it, and disregarded it with an offhand confidence that was captivating.

These supporting roles, if they can be described as such, were scaffolds the performance could not have done without.

One crucial scaffold was Mercutio, played by Tom Phelan, CC ’20. Each time Mercutio took the stage, he stole it. Decorated in a purple suede jacket and round yellow sunglasses that were “Prince-ly” to say the least, his powerful energy seemed to only grow as he osmosed the vivacious spirit of the crowd.

When it was Mercutio's time to die, the heavens literally roared, echoing back the energy he had brought to the performance. With a flash of lighting and a howl of thunder, Phelan fell. If the image of a slain Tybalt, played by Nell Bailey, BC ’19, and Mercutio lying lifeless in inch-deep puddles of rainwater in the wake of a thunderstorm is not the essence of tragedy, it is hard to say what is.

Furthermore, if the weather was not enough to raise the bar of this performance, the birds around Columbia also began to chime in in Cinderella fashion. When Coleman proclaimed, “It was the lark, the herald of the morn; no nightingale” (from Act V Scene I), nature interceded and birds began to chirp in response. The effect was uncanny.

One of the central surprise transitions in Shakespeare's “Romeo and Juliet” is that from comedy to tragedy. The sui generis role of the universe that saw downpourings and thunderstorms turn into birdsong, reversing the genre transition, made the performance on Friday night unique in Shakespearean tradition.