Q&A: Columbia’s undergrad web show producers on their upcoming seasons and life behind the camera

Q&A: Columbia’s undergrad web show producers on their upcoming seasons and life behind the camera 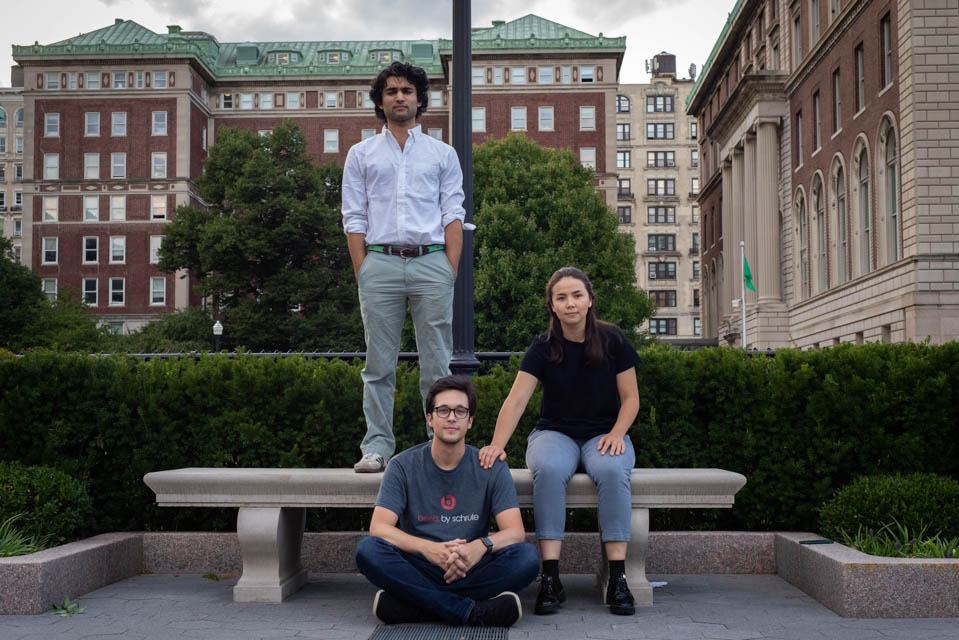 Student producers Zahin Das, Dylan Dameron, and Avery Park anticipate the release of season 2 of their web shows within the school year.

It’s that time of year again. Bright-eyed first-years and exhausted seniors alike participate in the chaos that accompanies the first few weeks of class. There’s no escaping it—unless there is.

Last year saw the introduction of two new undergraduate web series on campus. This semester, both shows are gearing up for their second seasons. The first, Quarter-Corn, is a documentary-style web series about magical students on campus that features Dylan Dameron, CC ’20, and Avery Park, SEAS ’20, in the roles of Dave and Donk, as they fight through the cutthroat world of club life at Columbia. The second, CU Tonight, is a late show-style series hosted by Zahin Das, CC ’20, that provides the undergraduate community with news, comedy, and iconic interviews (think John Oliver meets SNL with jokes about John Jay).

These shows don’t have Hollywood budgets or a trio of vicious dragons, but what they lack in funds, they make up for in humor and heartwarming reflections of Columbia life on screen. Spectator sat down with both series’ founders to get a preview of new episodes and life behind the camera.

The following are excerpts from an interview with Spectator, slightly edited for content and clarity.

First up: Quarter-Corn. Dameron and Park sat down with Spectator to discuss the future of Quarter-Corn characters after a season of campus triumph and heartbreak.

Spectator: When we left Dave and Donk last season, their club, the Magical Individuals League of the Future (M.I.L.F.), was teaming up with a new club, the Association for Supernatural Specimen (A.S.S.). What do they have coming up for season 2?

Dameron: I can’t give you what we’re building the season around—we’re actually designing the entire series around one sentence. A hint though, is that this is probably the last season of Quarter-Corn. Avery and I are both seniors, so we won’t have the opportunity to keep going. However, I can say that there is a lot more to Dave and Donk’s story.

Spectator: What were some of the highlights from last year?

Dameron: Honestly, a huge highlight for me has been working with Avery. She will take the script and add her own dialogue to some of the stuff I write. Some of the funniest and most heartwarming lines in the series are ones that Avery changed right before we started filming.

Spectator: What were some of the problems you encountered last season that you’re working to fix this season?

Park: Finding daylight. We try to start really early, but getting college students to get up early and get on set and coordinate is basically impossible. So it always runs late.

Dameron: Yeah, the thing we’re doing now is actually planning in advance. Last semester we would plan, like, two weeks in advance of shoot dates. Now what we’re doing is planning months in advance to avoid having the same problems.

Spectator: Has anyone recognized you guys on campus after watching your show?

Park: Yes, actually! There was one guy once, but he only recognized Dylan and not me.

Dameron: Yeah, it’s kind of hard, since the majority of time on camera we have our costume on. If we were walking around with the unicorn horn and the gnome hat and everything else, it might be easier.

Spectator: So this is probably a spoiler, but is there a love interest between the characters that will come up this season?

Dameron: I cannot confirm or deny that, but I can say that these characters will go through tremendous changes. A big thing is going to be tensions that inevitably arise when you’ve had a strong relationship between two people and that doubles to four. It has a lot to do with time management, basically. I can’t say too much though.

Spectator: What feedback have you received since the release of the first season?

Dameron: I had some people tell me they didn’t expect the show to have an actual story. They just thought it would be funny clips, I guess. The first few episodes definitely lend themselves to something like sketch material. But this season, I think, focuses on what it means for two groups who are rivals to come together and actually cooperate. The response so far has been good.

Spectator: What advice would you give to first-years interested in doing a film project?

Dameron: Write to me. I need help.

Dameron: Sort of. Honestly though, it’s all about finding a community. I guarantee there will be people around you who are inspired by the project you are developing. If you hangout in the Dodge lobby, basically, someone who is walking by would probably be interested.

Spectator: Any final previews of the upcoming season?

Dameron: I can definitely promise no one is going to die before the end of the show.

Next up: CU Tonight. Columbia’s premier late-night comedy news show is working on a slate of new episodes this year that features new interviews, sketches, and performances. Spectator sat down with Das, the show’s co-founder and host, to learn more.

Spectator: How was finishing up last semester at CU Tonight?

Das: It was good, but we definitely learned that releasing during finals is a total mess. We released our last episode after the end of last semester, because we wanted to make sure the episode was something we liked. It turned out well. It definitely was well-produced.

Spectator: What were some of your favorite parts of last season?

Das: There were definitely a few. My personal favorite part was being in the writer’s room. We’re pretty good friends at this point and just to sit down and come up with a good product that really gets Columbia—that will never get old. And there were other days where everything went right with production. Some days, you end up with a broken light or something, and it holds up everything you want to do. So, it makes it a lot better on those days when everything goes right.

Spectator: So, transitioning to this semester, is there anything you guys are doing differently this season?

Das: Yeah, so what we’re going to do this time is, rather than releasing half-hour episodes, we are going to be releasing segments separately. So, that should mean easier scheduling and more releases for this year. Last year, we had to pack a lot of scheduling into one or two weekends, so in this way, we should have smaller teams that can release things under less pressure.

Spectator: Are you keeping all of the segments—the opening monologue, the skit, the news desk, the interview, and the performances?

Das: We aren’t totally sure yet. But we definitely want to try and diversify the types of artistic performances we have on the show. A big part of the show is featuring cool stuff going on at Columbia, so we don’t want to lose that.

Spectator: Are you still the host?

Das: I am, at least for this semester. We will probably be auditioning off that position at the end of the semester though. It will let me take a little break and hopefully set up the next generation.

Spectator: What goals do you have for the coming season?

Das: Actually, one of our major goals for this semester is having a live performance.

Spectator: A live performance? Wow. Where?

Das: In the studio at Barnard. Of course, there are a lot of logistics to work through, but we’re trying to set up a few rows of chairs and get some people in for the taping. To me, a crucial part of late night entertainment is that dynamic between host and audience, so we want to at least try and make that happen. That’s the hope.

Spectator: What kind of feedback have you received so far?

Das: It’s been mixed, good and bad. But one of the most important pieces of good feedback that we’ve gotten from last semester was that we’ve been able to articulate some of what people have been thinking about Columbia, but not saying. I think this semester, we want to try and have a more investigative slant to what we do—not a full-on spotlight though. Some of the issues we want to tackle are the problems that are really rampant on campus; things like mental health, stress culture, the school bureaucracy, that sort of thing. One of the things I want to do is structure my monologues in a more John Oliver-type style, too. We want to keep the comedy aspect, but also make a meaningful point about some of these issues going forward.

Spectator: What are some of the performances you guys plan to have on the show next season?

Das: I can’t spoil anything, but I will say this as a hint. The goal—and it’s tough at Columbia—but it is to get more figures from the Columbia administration on the show.

Das: Well, I am in his class this semester, so who knows what could happen?