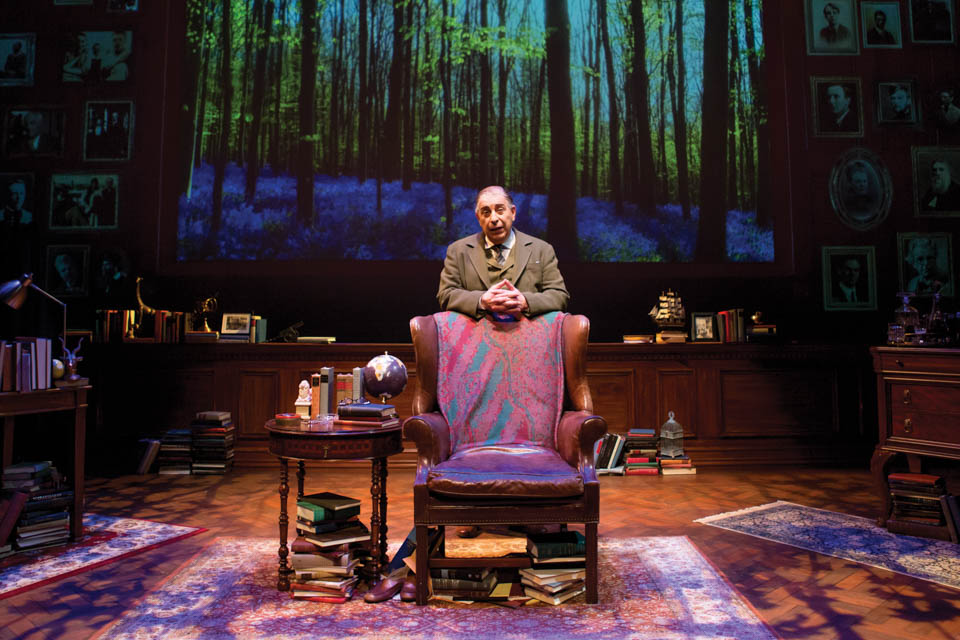 The one-man show was created, co-directed, and acted by Max McLean, founder and artistic director of the Fellowship of Performing Arts.

“This must be a simply enormous auditorium!” thought an audience member.

And then the audience saw a light ahead of them, not a few inches away from where the back of the auditorium ought to have been, but a long way off. A silence and darkness descended on them. A moment later, the audience found itself sitting right in the study of C.S. Lewis with a starry sky and full moon appearing as the backdrop.

This paragraph may have changed a few words from the original text of the wardrobe scene from C.S. Lewis’ famous “The Lion, the Witch and the Wardrobe,” but putting a theatrical spin on Lewis’ writings to create plays is exactly what actor Max McLean seeks to do.

On Tuesday evening in Roone Arledge Auditorium, the Fellowship of Performing Arts came to Columbia to perform C.S. Lewis Onstage: The Most Reluctant Convert. The one-man show was created, co-directed, and acted by Max McLean, founder and artistic director of FPA. McLean compiled many of C.S. Lewis’ works to write the play, including The Weight of Glory, Mere Christianity, and Lewis’ autobiography, Surprised by Joy.

The set was furnished like an ornate office, with stacks of books piled across desktops and on the floor. Over the course of the performance, a projection upon the back wall morphed from a window view of the Oxford cityscape, with picture frames on both sides showcasing important figures from Lewis’ life, to serene forest images juxtaposed with scenes from the battlefield.

There were two particularly unusual aspects to this performance: firstly, its being a one-man show, and, secondly, a religious conversion narrative. When asked about whether the show had received backlash for its Christian advocacy, McLean told Spectator in an interview that, after performances at University of California, Berkeley; Princeton University; and Brown University; the universal respect for C.S. Lewis as a writer seems to overpower any secular dissension.

The Most Reluctant Convert explores Lewis’ early life in relation to his journey away from and back to religion as told through anecdotes and excerpts from Lewis’ theological works.

After forays into atheism, satanism, and materialism, Lewis eventually—with much skepticism and trepidation—converted to theism. And, after a long walk with friends and fellow Oxford colleagues J. R. R. Tolkien and Hugo Dyson, he became a Christian.

The accounts of Lewis’ life in academia, from boyhood schooling to a fellowship at Magdalen College to Oxford to his time as a soldier during World War I, were compelling narratives that structured the arc of his changing beliefs.

Another poignant moment was Lewis’ recollection of observing a miniature garden his brother had created on the lid of a biscuit tin—the first time he had felt true, yet ephemeral, joy. This exploration of joy was one of the elements of Lewis that resonated most with McLean.

"My sense of that is that the joy he’s describing is actually a glimpse of heaven,” McLean said. “It’s like the supernatural world breaking into the material world ... and it [can come] through small things, like the toy garden, [or] reading Phantastes."

For McLean, the reason why C.S. Lewis can be adapted for stage so successfully, and why he

chose the author, lies in Lewis’ natural narrative style and his openly emotional and intellectual personality.

According to McLean, Lewis’ semi-autobiographical novels with clear narratives, such as “The Great Divorce,” display a unique combination of intellectual thought and raw emotion that lend themselves to theatrical presentations—to such complexity that McLean’s play even attracted the attendance of a class from the NYU Institute for Psychoanalytic Education.

“Some people are all intellect and no emotion: [Lewis’] intellect sort of sparks his emotion. If he thinks it, he feels it,” McLean said. “I think what that means for a psychologist is there is this deeper connection to what he’s thinking; that thought is the outer ring of much more deeper layering."

The Most Reluctant Convert has been a project many years in the making—first conceived by McLean in 2011, it opened in 2016. McLean read all of Lewis’ material in preparation, as well as almost a dozen biographies, in order to feel like he could capture the author’s persona accurately onstage.

An adult convert to Christianity himself, McLean was drawn to the author’s ability to perceive not only from a theological perspective, but from a multifaceted one.

While The Most Reluctant Convert is informed by Lewis’s literary works, the tale ends with Lewis at 32 years old, taking communion—before he would become a prominent writer and the foremost scholar in medieval and renaissance literature.

McLean has worked with Lewis as a subject in multiple capacities, including adapting The Screwtape Letters and The Great Divorce into plays. The actor is presently working on a continuation of The Most Reluctant Convert—which he hopes to open next year—that will investigate Lewis’ literary career after his conversion.

When asked what advice he might impart on Columbia students, McLean returned to a spiritual message.

“Well, you know that quote, ‘make them laugh, and while their mouths are open, pour truth in,’ Harold Klurman. I think the idea of looking for joy, looking for meaning—I think that’s so keen,” McLean said.

“And, I think for students—you guys work hard—finding the meaning behind the work [is important] because meaning will make you work harder. ... There's a great Bible verse about choosing life: ‘As for me and my house, we choose life.’ And I think that means we choose meaning; we chose hope.”

Deputy editor Samuel Jones can be contacted at samuel.jones@columbiaspectator.com.